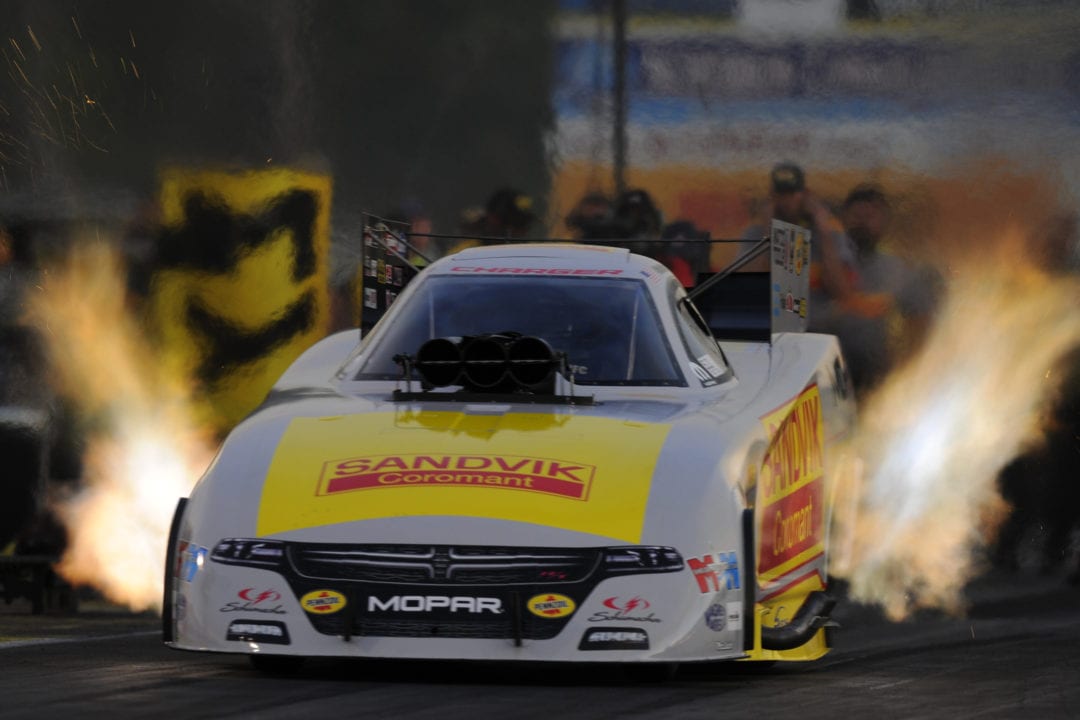 Matt Hagan continued his recent hot stretch in the Funny Car class by earning the preliminary No. 1 qualifier at the sixth annual NHRA New England Nationals at New England Dragway.

Leah Pritchett (Top Fuel) and Greg Anderson (Pro Stock) are also preliminary No. 1 qualifiers in their respective categories at the 13th of 24 events on the 2018 NHRA Mello Yello Drag Racing Series schedule.

Hagan jumped atop the category lead with a pass of 3.932-seconds at 322.04 mph in his Sandvik Coromant Dodge Charger R/T recorded during his second qualifying run of the day. He entered the weekend tied for second in the Funny Car points standings following his victory in Norwalk, Ohio as he also chases his second consecutive win in Epping.

“Coming off the race win in Ohio gives us confidence heading into this event, and so far we have continued to just build on that,” Hagan said. “I felt like we had a good handle on the track today, and it’s definitely something we can work off of for the rest of the weekend.”

Jack Beckman finds himself second currently after a 3.956 at 320.20 in his Infinite Hero Foundation Dodge Charger R/T during the second round of qualifying.

Pritchett powered to the preliminary top spot with a run of 3.742 at 324.51 in her Mopar dragster during her second qualifying pass of the day. Pritchett earned the No. 1 qualifying spot a year ago at New England Dragway by setting the track record with a 3.673 pass, as she looks to make it two consecutive top qualifiers in Epping.

“Our last pass came together with some last-minute changes, but I have confidence in my team and we are starting to feel like we have our strongest car of the year,” Pritchett said. “We’re going to take it one round at a time to prepare for Sunday, but we feel very strongly about this run.”

Tony Schumacher winds up second after the initial day of qualifying with a 3.744 at 330.31 in his U.S. Army dragster during his second qualifying run.

Anderson currently leads the Pro Stock class after driving to a 6.517 at 211.73 in his Summit Racing Equipment Chevrolet Camaro during his second pass of the day. The four-time world champion is chasing his eighth No. 1 qualifying spot of the year and fourth in the past five races.

“It was very humid when we came out this morning which made it tough on our race cars, but the temperature went down enough to give perfect conditions for the Pro Stock class,” Anderson said. “This is a great racetrack and the air here is fantastic, so thankfully our team made the most of these conditions.”

Vincent Nobile is currently qualified second following a 6.528 at 211.20 in his Mountain View Tire Chevrolet Camaro as he chases his second No. 1 qualifier of 2018.

Qualifying continues at 1:30 p.m. on Saturday at New England Dragway.