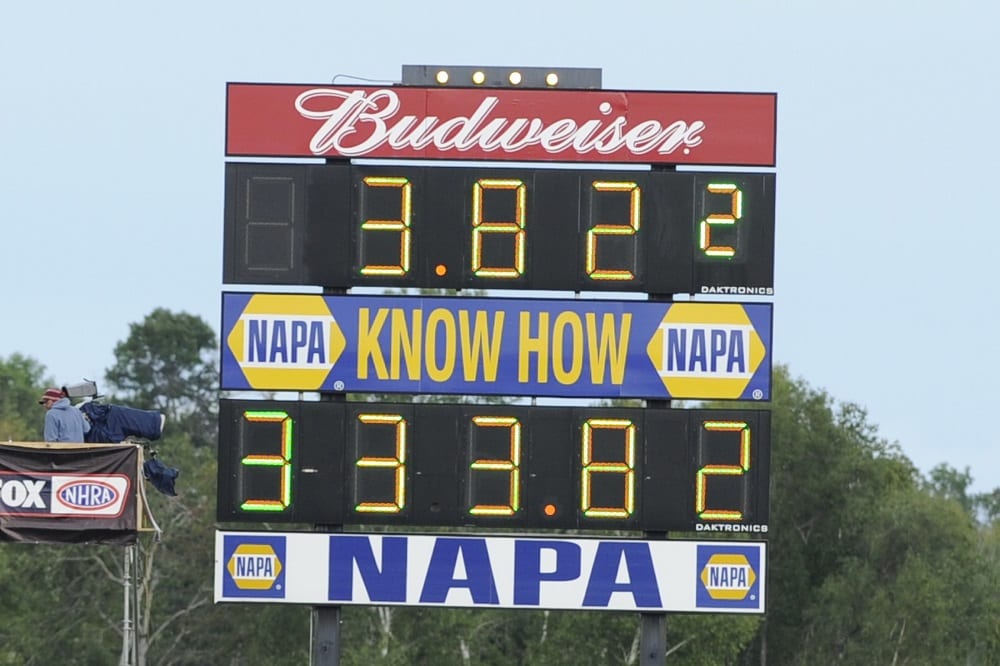 Antron Brown (Top Fuel), Vincent Nobile (Pro Stock) and Angelle Sampey (Pro Stock Motorcycle) also were No. 1 qualifiers in their respective categories at the 17th event of 24 on the 2016 NHRA Mello Yello Drag Racing Series schedule. This is the penultimate event of the regular season. 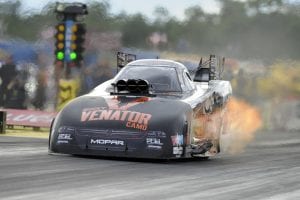 Hagan blistered the track in his Mopar Express Lane / Rocky Boots Dodge Charger R/T with a 3.822-second pass at 333.82 mph to set the elapsed time world record and claim his third No. 1 spot of the season and 24th of his career. Hagan won back-to-back events earlier this year in Atlanta and Topeka, Kan., and has already clinched his spot in the Countdown to the Championship. He has never won at Brainerd but will put forth his best effort as he opens Sunday’s 11 a.m. eliminations against John Bojec.

“I have (crew chief) Dickie Venables in my corner and that guy is so bright and so brilliant,” said Hagan, who qualified No. 1 at Brainerd once before in 2011. “He said, ‘Hey kid, it’s going to go really fast or nowhere at all.’ It’s cool to know that you can hang on to a racecar that does that and has the capability to do that. Dickie is smart enough to make it all work. It really comes down to my guys, so when I get to crawl into a racecar, it’s a blessing. We have potential to be out here in a championship hunt again this year. One step at a time.”

Reigning Funny Car world champion Del Worsham qualified second with a 3.856 at 326.71 in his DHL Toyota Camry. Worsham, who lost to the Ron Capps in the postponed Seattle Funny Car final round that took place during the third qualifying session earlier in the day. Capps recorded the 50th win of his career when he defeated Worsham with a pass of 4.014 at 322.42. 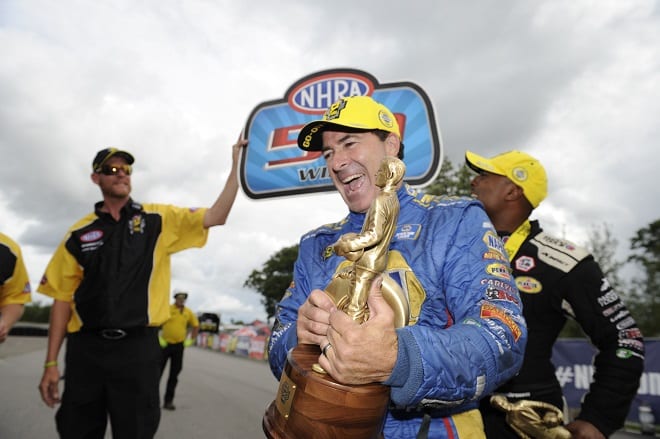 Tommy Johnson Jr. is in third with a 3.859 at 327.98 in his Make-A-Wish Foundation Dodge Charger R/T. He will go up against Dale Creasy Jr. Sunday morning. Jack Beckman is fourth and will race Cruz Pedregon while Capps is fifth and will battle John Hale.

Brown notched a 3.679 at 328.30 in his Matco Tools dragster to take the Top Fuel lead in the fourth and final qualifying session. He tallied his 46th career No. 1 qualifier and second of his season. This is his second Top Fuel No. 1 qualifier at Brainerd International Raceway. Brown has sprinted to four victories so far this season and won this event in 2011. He will go up against the ageless Chris Karamesines in the first round.

“My car went right down Broadway and it was ripping,” said reigning world champ Brown. “I felt the car up on the tire and it stayed on the tire and went right down the track nice, silk, streak and smooth. I’m so proud and stoked for my boys. Tomorrow is going to bring a whole new race day and we’re going in with a good foot forward but it is a brand new day. We have our work cut out for us.” 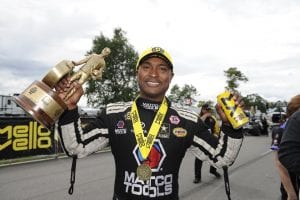 Earlier in the day, Brown defeated Steve Torrence in the delayed Seattle final round that took place in the third qualifying session with a run of 3.747 at 320.13. The victory was Brown’s fourth of the season in seven final round appearances. The victory extended his series points lead.

In second is two-time 2016 winner Shawn Langdon, who posted a 3.690 at 328.38 run in his Red Fuel / Sandvik Coromant dragster. Langdon, who clinched his spot in the Countdown to the Championship after his pass in the third qualifying session, will look to win the Brainerd event for the first time when he opens eliminations against Luigi Novelli.

Brittany Force, another two-time 2016 event winner, is third in her Monster Energy Dragster and is paired with Terry Haddock in the first round. Eight-time world champion Tony Schumacher is fourth in his U.S. Army dragster and will battle Scott Palmer Sunday morning while Torrence is fifth and Doug Kalitta is sixth.

In Pro Stock, Vincent Nobile powered his Mountain View Tire Chevy Camaro to his second consecutive No. 1 qualifier with a 6.597 at 209.17. This is the first time in his career he has gone No. 1 at back-to-back events. Nobile earned his sixth No. 1 of his career, second of the season and second at Brainerd.

“We made a pretty good run and as you can see, we took the No. 1 spot,” said Nobile, who clinched his spot in the Countdown with his category best performance. “I’m really proud of my guys. Two weekends (as No. 1) in a row – it’s incredible. I’ve never had such a good racecar. We’ve won races before but we have never been No. 1 like this. This is a pretty incredible feeling.” 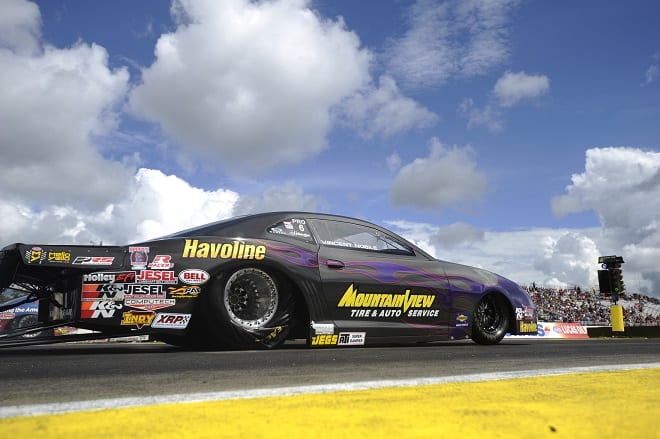 Nobile raced to the final round as the No. 1 qualifier two weekends ago in Seattle at the Protect the Harvest NHRA Northwest Nationals presented by Lucas Oil before the event was postponed due to rain. The Seattle Pro Stock final round between Nobile and Aaron Strong will be decided at the Chevrolet Performance U.S. Nationals in Indianapolis.

Points leader Jason Line drove his Summit Racing Equipment Chevy Camaro to the No. 2 spot with a 6.606 at 208.68. Line won this event in 2014 and so far has seven victories this year. He will give his best against Alan Prusiensky in the opening round.

In third is Denver winner Allen Johnson, who pushed his Marathon Petroleum / J&J Racing Dodge Dart to a 6.613 at 208.59. He will battle Mark Hogan Sunday morning. In fourth is 2015 top rookie Drew Skillman and in sixth is Bo Butner, who is eager to hoist his first Wally.

Angelle Sampey rode her Star Racing / Precision Service Equipment Buell to the No. 1 qualifier in Pro Stock Motorcycle with a 6.830 at 196.64 to claim the 47th No. 1 qualifier in her career, second No. 1 of the season and her second at Brainerd International Raceway. Sampey, the winningest female driver in NHRA history with 42, won earlier this season in Englishtown, N.J., to claim her first win since 2007. She will hope to ride to her first victory at Brainerd tomorrow as she opens eliminations against Angie Smith.

“We actually weren’t able to make a tune-up call on the last run,” said Sampey. “In the third round of qualifying, the 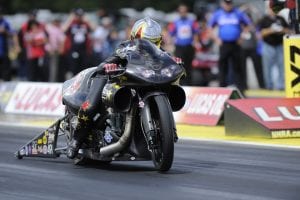 bike took off and went to the right and I had to hang off the left side of it all the entire way down the racetrack. The wire that goes from the computer to the motorcycle broke and we weren’t able to do it, so we went with the exact tune up from the third session, but fortunately we went faster because I went straight this time and shifted on time. I’m so proud of my guys and they provide me with a really fast motorcycle and I’m the lucky one who gets to sit on the bike and have some fun.”

Reigning world champion Andrew Hines qualified second with a 6.852 at 194.24 on his Screamin’ Eagle Vance & Hines Harley-Davidson. Hines is a two-time Brainerd winner and has notched three victories in five final round appearances so far this season. He is paired with veteran Steve Johnson in the first round.

Hector Arana Jr. is in the No. 3 spot with a 6.855 at 193.82 on his Lucas Oil Buell. He will race Jim Underdahl in the first round. Recent Sonoma winner LE Tonglet is fourth and will go up against Karen Stoffer while Matt Smith is sixth and will battle Hector Arana Sr.