It’s a record-setting and remarkable number that included a perfect mix of series regulars and series rookies ready to put it all on the line at the facility whose slogan is “The Fastest Track in Michigan.” They prevailed over heat, humidity, rain and raucous thunder early in the weekend to heap on the horsepower when cool and crisp air came later in the weekend.

While there were fewer fans in attendance in accordance with current state guidelines, they were engaged and eager to see which racers would go all the way to the Aerospace Components Winner’s Circle after several rounds of close competition.

VP Racing Lubricants Xtreme Pro Mod racers were in rocket-mode, with seven of eighteen of them running 3.70s in qualifying, and others right there with 3.80s and 3.90s. Jim Widener set the pace for the second race in a row with a 3.70, but it was Eric Gustafson (above) and Adam Flamholc who were pulling into the waterbox for the highly anticipated final round of eliminations. They leaped off the line with nearly identical reaction times, and it was anybody’s race until Flamholc was forced to pedal it and Gustafson went on to a 3.70 to win. 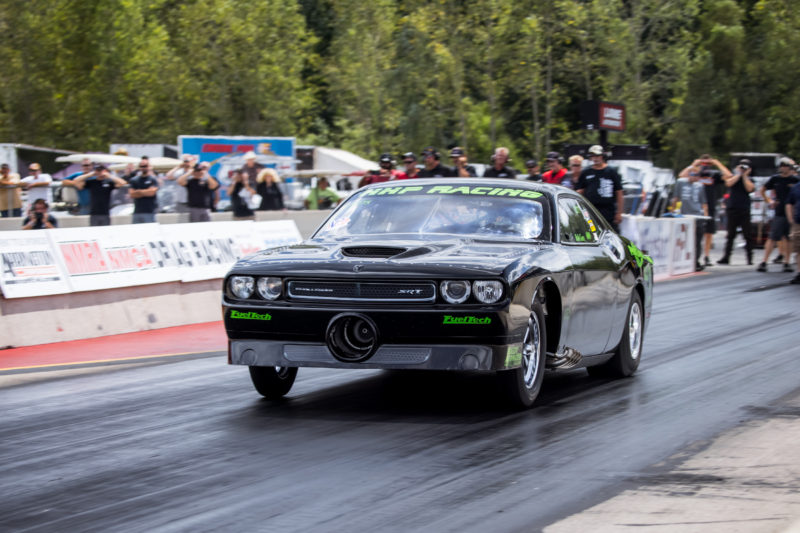 NMCA and NMRA drivers joined forces for Mickey Thompson Tires/VP Racing Madditives Street Outlaw, and Rob Goss led qualifying with a 4.28 in his Challenger. He was on a roll all weekend long, and wrapped up the win with a 4.27 against Alan Felts, who wasn’t far behind with a 4.35.

In Holley EFI Factory Super Cars, Drew Skillman sailed to a 7.62 in his Mustang Cobra Jet to lead qualifying, and he remained on point on his way to the final round of eliminations to face his father, Bill Skillman. Bill Skillman ran uncontested as Drew Skillman wasn’t able to make the call to the lanes.

While the nitrous plumes in ARP Nitrous Pro Street were aplenty, there were none from Tony Gillig’s naturally aspirated Cutlass, which carried him to a 4.36 to set the pace in the category. Gillig, who won at the NMCA event at World Wide Technology Raceway in July, wanted to back it up, and he did just that with a 4.39 against Derik Trimmer, who trapped a 4.52.

NMCA Edelbrock Xtreme Street and NMRA Edelbrock Renegade were paired up and putting on a show at this event, and among the drivers doing so was Brian Keep, who led qualifying with a 4.66 in his Camaro. But Martin Connelley and George Farkouh battled in the final round of eliminations, and Connelley advanced to the Aerospace Components Winner’s Circle with a 4.64 over Farkouh’s super-close 4.65.

Engines were happy and humming in Dart NA 10.5 presented by Diamond Pistons, where reigning champion Leonard Long set the pace with a 7.83 in his Mustang. He lined up alongside Robbie Blankenship in the final round of eliminations, and Blankenship blasted to a 7.76 to take the win over Long, who lapped a 7.84.

For the second race in a row, Ronnie Hackelton led qualifying in Chevrolet Performance Stock presented by Scoggin-Dickey Parts Center, and this time, it was with a 10.18 in his Camaro. He made it all the way to the final round of eliminations to find Shawn Calabrese waiting for him. When the tree dropped, both racers had very comparable reaction times, but Calabrese earned the trip to the Aerospace Components Winner’s Circle with a 10.34 over Hackleton’s 10.56.

Quick Fuel Technology Nostalgia Super Stock saw Geary Bates lead qualifying with a 10. 50 on a 10.50 index, and later, Doug Wright wrapped up the win with a 9.39 on a 9.25 index over Bruce Lang, who dipped under his 9.75 index with a 9.73.
In Detroit Truetrac Nostalgia Muscle, Tim Boggs led qualifying with an 11.00 on an 11.00 index, but the final round belonged to Ron Geer and Chad Brewer, and Geer got to the win despite breaking out with a 11.42 on an 11.50 index as Brewer turned on the red light.

In MagnaFuel Open Comp, Nick Caputo recorded a .0005 reaction time in his Vega to lead qualifying, and in the class where races are won and lost by micro margins, Doug Winters took the trip to the Aerospace Components Winner’s Circle with a lifting 10.89 on a 10.53 when his opponent, Dan Caissie, was forced to get out of the throttle.

An attractive feature of events on the NMCA tour is the popular Dodge // Mopar HEMI Shootout. At this event, John Keyes was the overall winner with a 9.89 average, while Tom Motycka was the runner-up with a 10.02 average. Alan Scruggs took the 10-second win, Jim Burr emerged as the 11-second winner, Jeff Smith secured the 12-second win and Alan Scanlan motored to the 13-second win. Putting the exclamation mark on the category was David Baker who was the 14-second winner.

The eight quickest drivers in the Dodge//Mopar HEMI Shootout came together for the Arrington Performance HEMI Quick 8 presented by Red Line Oil, and John Keyes arrived at the win with a 9.91, after Alan Scruggs was disqualified.

It’s around this time each year that the NMCA proudly offers the Ford Performance Cobra Jet Showdown presented by Watson Racing, and it is one of the largest gatherings of classic and new Mustang Cobra Jets in the country. With Ford Performance and Watson Racing located just a few hours from U.S. 131 Motorsports Park, racers devoted to both businesses pulled into the beams with their powerful machines and put the pedal to the metal. Charlie Downing, who was clocking 10.30s and 10.40s throughout the weekend, drove to the win when Steve Trombley turned on the red light in the final round of eliminations.

Even more Motor City muscle was featured at this event with the Chevrolet Performance COPO Camaro Shootout presented by COPO Parts Direct. Todd Patterson pulled off the win with a 9.33 on a 9.07 dial over Mike Pustelny, who was 10.75 on a 9.64 dial. There was also a shootout for naturally aspirated cars only, and Rich Rinkie won with a 9.11 against Clarence Harding.

Motor City Muscle Challenge was in the NMCA mix for the first time at this event, and the heads-up category where racers run naturally aspirated combinations in cars that roll on 9-inch tires was an attractive addition. Rob McDonnough led qualifying with an 8.89 in his Camaro, but Shawn Stanisewski prevented him from pushing to the win in the final round of eliminations, as he got to the finish line first with a 8.97 with McDonnough hot on his heels with a 9.02.

Racers will be even more determined — and absolutely driven — at the 19th Annual Nitrous Supply NMCA World Street Finals presented by Chevrolet Performance, Sept. 24-27 at Lucas Oil Raceway in Indiana. As the final stop on this year’s NMCA tour, that’s where championships across the categories will be cemented.