The arrangement includes financial and marketing support for the team at regional NHRA competitions, as well as other auto and racing related events.

“This is a great way to increase the visibility of our award-winning property on a grassroots level in a number of key markets throughout the Midwest”, said Matt Buckley, Vice President of Marketing at MGM Grand Detroit. “We are able to work with a local Michigan team in a mutually beneficial partnership. We are excited about this great opportunity.” 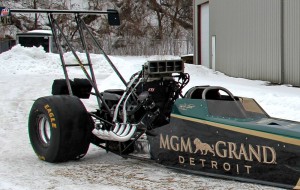 In 2013, after 15 years of racing in various lower divisions, chief mechanic Phillip (Phil) and driver John Paul (JP) Gutierrez made the move up to Top Alcohol Dragster Division in NHRA competition. The team spent nearly two-years constructing the 2800 hp dragster, capable of hitting 270 mph, out of their family-owned Berkley shop.

Last year the dragster raced for the first time at events in Norwalk and Columbus, Ohio, gaining valuable experience that led to where they are now.

“It has been our dream ever since we were young to race at the top level of competition,” said 30-year-old Phil. “With the support of MGM Grand Detroit, my brother and I move one step closer to achieving our goals.”

“I started racing when I was 8 years old and this is the most excitement I have felt at the start of a season,” said 23-year-old JP. “To feel the support from the community and business community has inspired Phil and I to look beyond 2014.”

The Gutierrez Brothers Racing team is planning to compete in the following four regional events in 2014:

In addition, the team and the MGM Grand Detroit sponsored dragster can be seen at the following events in Metro Detroit.

“The entire MGM Grand Detroit team looks forward to cheering on JP, Phil and all of Gutierrez Brothers Racing as they rocket down the drag strip in chase of their goals to contend in the NHRA,” Buckley added.