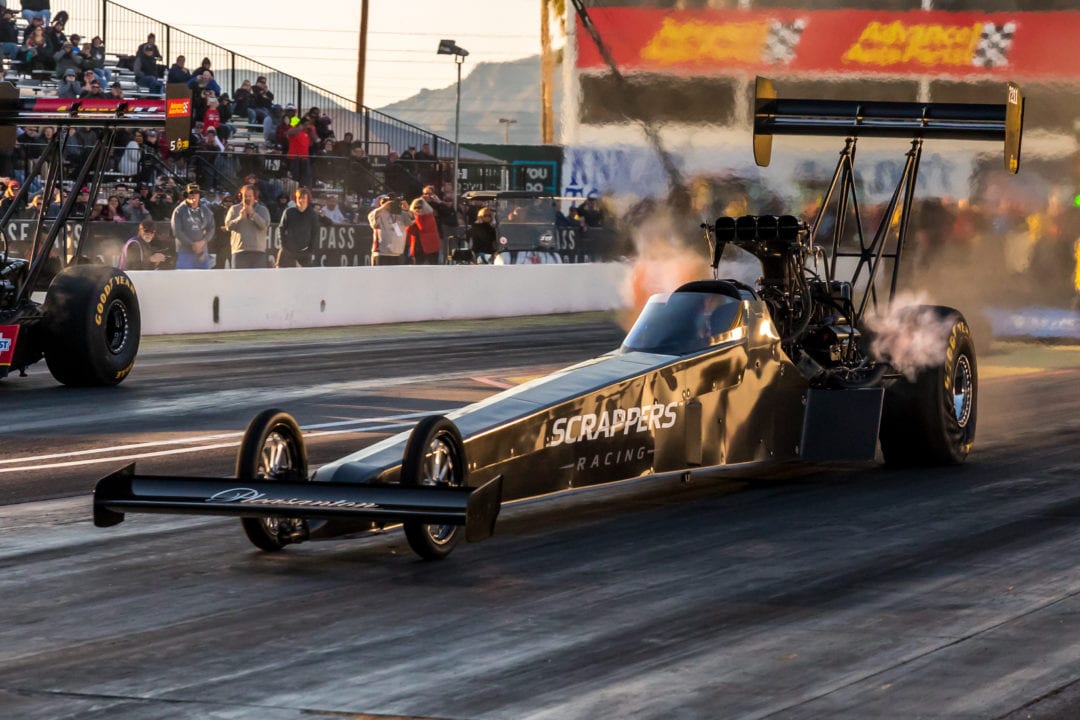 This weekend at Wild Horse Pass Motorsports Park in Phoenix was unlike one Mike Salinas has ever experienced in his NHRA Top Fuel career.

The only good news was that it happened during the second race of the year – the Magic Dry Organic Absorbent NHRA Nationals – and not during the Countdown to the Championship.

A variety of gremlins plagued Salinas’ Scrappers Racing dragster from start to finish in what turned into a totally unexpected weekend after a semifinal appearance at the 2019 NHRA opener in Pomona.

A host of problems prevented that type of performance in Phoenix, as Salinas fell to eventual winner Billy Torrence in the second round of eliminations on Sunday. Salinas ran 3.848 at 275.17 mph, slowing on the top end against Torrence’s winning 3.687 at 329.58.

“We just had some gremlins and it bit us all weekend,” said Salinas, who leaves Phoenix sixth in Top Fuel points. “We got it solved before the finish and we’ll be ready for Gainesville, but, man, we had a rough weekend. It was just one of those things. This was one of the hardest weekends in my racing career.”

It was an uphill battle from the outset with uncharacteristically cool temperatures in Phoenix. Qualifying was cut short on Friday, leaving Salinas and his team with only two passes on Saturday in tricky conditions.

He qualified ninth with a 3.862 at 274.55, setting up a first-round matchup with Scott Palmer. Not much went right as Salinas spun the tires around half-track, but Palmer had even more struggles, smoking the tires immediately off the starting line. That gave the round win to Salinas and he kept pace with Torrence early on before slowing down the stretch.

“It was a rough one. We have good parts and pieces, but the left lane was tough out there,” Salinas said. “We were lucky that Palmer smoked the tires. Billy had a very fast car and it was his weekend. We tried to run the car like we did in Pomona, but the track couldn’t hold it this weekend, especially in the left lane.

“For a weekend like this, you chalk it up to our gremlin weekend. Now, let’s go race and have some fun. The crew, the team, everybody pulled together and stuck together. We have one of the best crews out there, so we’ll get to the next race and be ready to go.”

Salinas has plenty to build on heading into the 50th annual NHRA Gatornationals in Gainesville on March 14-17, including sitting just 23 points out of third. He already has three round wins in 2019, career-best performances in Pomona and the way Salinas sees it, his team already showed impressive resolve in one of the strangest and most frustrating weekends of his racing career in Phoenix.

“It was a gremlin weekend,” Salinas said. “Gremlins captured, problem solved and now we’ll be ready for Gainesville.”