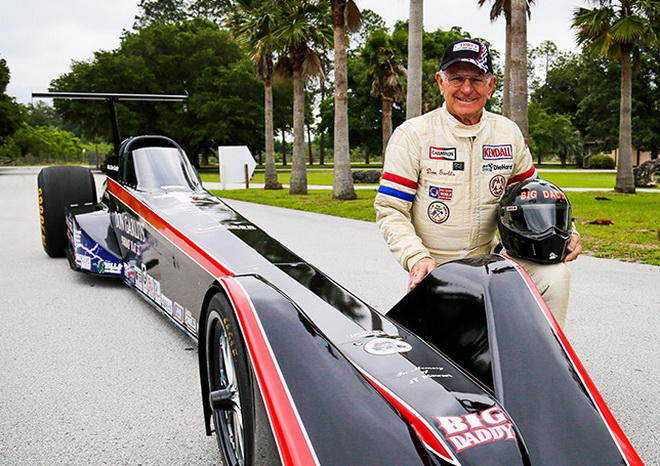 Drag racing legend Don “Big Daddy” Garlits, fresh from his record-setting, quarter-mile electric vehicle (EV)  runs in “Swamp Rat 37,” the “Quest for 200 MPH on Batteries” Dragster (above), will be a guest of honor at the 2014 Electric Drive Transportation Association (EDTA) Conference May 20-21, at Indianapolis.

Garlits is scheduled to attend the  EDTA “Night at the Track – Gala Reception” May 20, at Indianapolis Motor Speedway before being introduced by EDTA President Brian Wynne the next day at the conference-closing plenary and luncheon.  “Big Daddy” is slated to present remarks and video on the very successful first test of Swamp Rat 37, his vision for the future of the “Quest for 200 MPH on Batteries” program, and for the EV future of America.

The 2014 EDTA Conference will be held at the Indianapolis Convention Center in downtown Indianapolis, a scant 40 minutes from the drag strip site of Garlits’ historic eight US Nationals victories in his five-decade drag racing career. EDTA Conference attendees will include automakers, utilities, battery and equipment manufacturers, suppliers, government partners and end users.