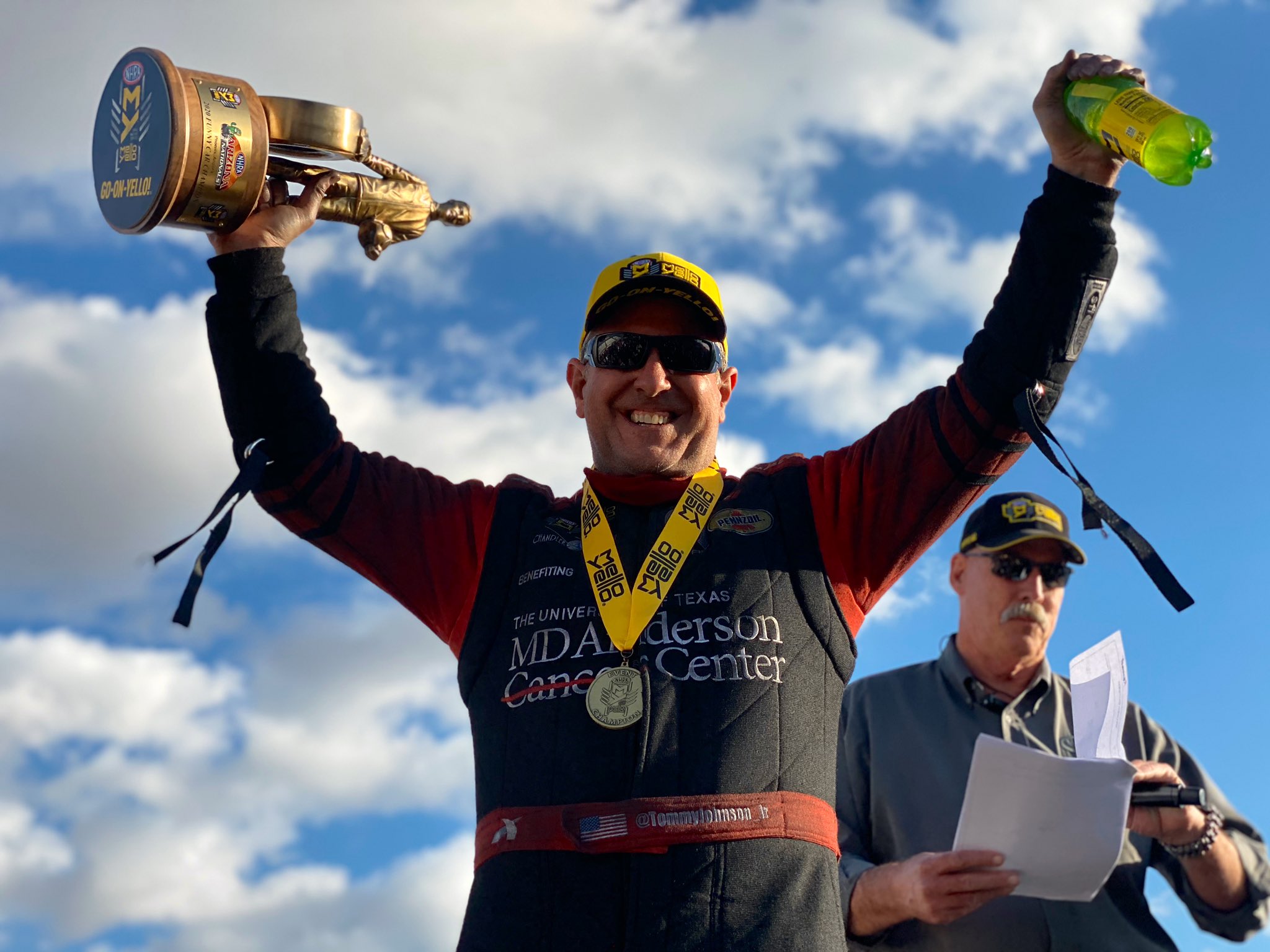 Tommy Johnson Jr. drove the MD Anderson Funny Car to its very first event win on Sunday afternoon at the NHRA Arizona Nationals, delivering the second consecutive victory for team sponsor Doug Chandler in 2020. Johnson defeated fellow ‘giving car’ driver and the winner of the season-opener, Jack Beckman, in the final round to earn his 20th NHRA victory and second at Wild Horse Pass Motorsports Park.

“There wasn’t going to be a loser,” said Johnson of his final round meeting with Beckman and the Infinite Hero Foundation Funny Car team. “Doug Chandler is supporting both these teams, and both are ‘giving’ cars and paying it forward so much. You love to bring it home for somebody like that who helps so many others. Yeah, I wanted to win, but even if we had lost, Doug still won. That’s the main focus of both of our teams – to go out and do the job that Doug’s wanting us to do, and that is promote these foundations that he’s supporting. No matter who won that one, it was a win. Beckman got the first one of the year, and I got the second one, so it’s even now.

“We’re making the statement that we’re racing to beat cancer, and today we did that,” Johnson continued. “And hopefully, that helps with the support of everybody seeing this car and realizing what we are trying to do here and that is to get people to donate money to the MD Anderson Cancer Center, and let these guys research cancer more and figure out how to not only treat it but stop it.” 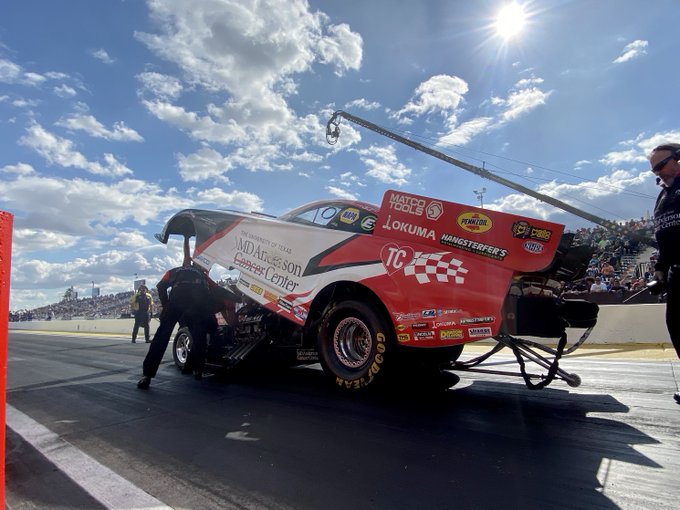 As the No. 4 qualifier, Johnson’s journey to the Phoenix winner’s circle began with a first-round victory over Paul Lee. Johnson was first out of the gate and never trailed, capturing the win with his 3.878 E.T. In the quarterfinals, Johnson’s Dodge Charger SRT Hellcat was quick and consistent yet again, crossing the beams in 3.864 seconds while his opponent fouled out by stepping on the throttle early.

The semifinals found Johnson duking it out with teammate Ron Capps, and again he did not falter, using a starting line advantage coupled with a solid 3.871 E.T. to earn the holeshot win and set up a final-round meeting with Beckman. Johnson was previously 0-4 in final rounds against his teammate, but this time, the win light would go off in Johnson’s lane when he defeated his tire-smoking stablemate with a 3.883-second at 326.40 mph pass.

“Coming out here today, we had a lot of confidence,” said Johnson, who made his professional debut in 1989 while competing at the Chandler, Ariz. facility in the Top Fuel category. “To go out there first-round and lay down a solid number, we were really happy with that. We weren’t low E.T., but we were really close and to come out second-round and run low E.T. of that session., we knew we had a solid car.

“As a driver, going into each round, knowing you’ve got a car that’s going to perform, it makes your job a little easier and gives you a little less stress. John Collins, Rip Reynolds, and the guys did a great job. I mean, even in Pomona, we had a good car, we just dropped a cylinder in E2. We even had a little issue with that in qualifying here, and the guys worked hard to fix that, and now it’s running really well and consistent. This team did their homework over the off-season.”

Not only did Johnson get to breathe a small sigh of relief in getting that first win of the year out of the way so early in the season, but he also moved up to second in the Funny Car point standings.

“I was very relieved when I turned the corner down there after the finals; it felt like it took a little bit of pressure off. We had such a good car last year, and we didn’t finish well at all, so it feels good to come out strong and get that out of the way right off the bat and know how good of a car you have. Now, we shift to maintaining it.”