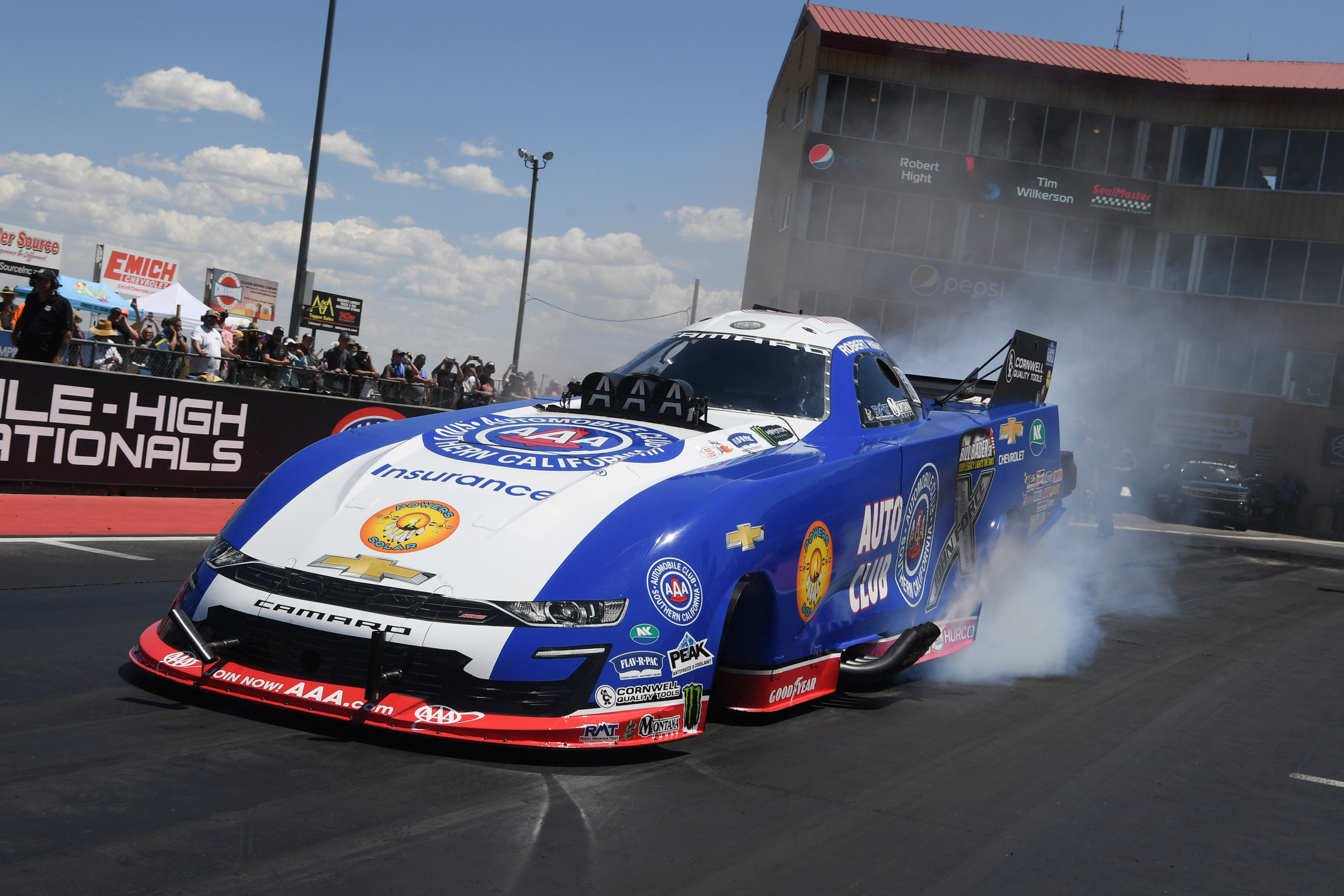 Already on an incredible run this summer during the 2022 NHRA Camping World Drag Racing Series season, Robert Hight now heads to a track where the Funny Car points leader has enjoyed some of his greatest moments, including a run of three straight victories at Sonoma Raceway.

Hight will look to become the first driver in NHRA history to win four straight races in the heart of wine country at this weekend’s 34th annual Denso NHRA Sonoma Nationals, and he certainly heads to Sonoma with plenty of momentum. Hight has won two straight races this season in his 11,000-horsepower Auto Club Chevrolet Camaro SS, taking over the points lead and giving him five wins in 11 races.

It’s an impressive stretch and Hight is hungry for more at a track that always seems to treat him well. In addition to his four career wins in Sonoma, the three-time Funny Car world champ also made the fastest run in NHRA history at the track, going 339.87 mph in 2017. That was one of several Hight highlights in Sonoma and he’s looking for another this weekend at the middle race in the famed three-race NHRA Western Swing.

“We’ve just got to go here and treat it like we did in Denver and make three really good qualifying runs and race smart,” said Hight, who has 58 career victories. “If we keep doing that, the round wins are going to come, but this class is tough. I think it’s a successful season when you have five wins total with the level of competition here. We’re at the halfway point, but it’s the next 11 races that count. We have to keep working and keep digging. I’d like to get to 60 (career wins) this year. Everything from top to bottom is working right now. We have to stay focused and keep working, and we can only get better.”

Steve Torrence (Top Fuel), Robert Hight (Funny Car), Aaron Stanfield (Pro Stock) and Karen Stoffer (Pro Stock Motorcycle) won the 2021 event, and this year’s race will be broadcast on both the FOX broadcast network and Fox Sports 1 (FS1), including live eliminations coverage starting at 4 p.m. ET on Sunday, July 24 on FOX. It is the 12th of 22 races during the 2022 season, kicking off a second half of the year Hight hopes is just as successful as the first half.

He won nearly half the races in the first 11 events, advancing to seven final rounds in the process. Though there’s a long way to go, Hight’s Denver win opens up the possibility to sweep the Western Swing, something that hasn’t been done since 2009 and only been done once in Funny Car.

Hight isn’t ready to think about that, as he’ll have to deal with the likes of Matt Hagan, defending world champ Ron Capps, Cruz Pedregon, Bob Tasca III, who has advanced to back-to-back final rounds this year, Alexis DeJoria, and J.R. Todd. But the veteran standout is thrilled to see how his team has bounced back from a difficult 2021 season, where his Sonoma victory was one of the few highlights.

“Last year was very disappointing,” Hight said. “I thought we would pick up right where we left off in 2019 when we were dominant, and it just didn’t happen. But what’s different this year is we’re not changing everything every week. We’ve got a great combination and we’re fine-tuning it, and I think we’re only getting better and more consistent. I don’t feel like we’ve peaked yet, but I also know the competition is getting tougher and we’ve got our work cut out for us. We’re going to keep working hard.” 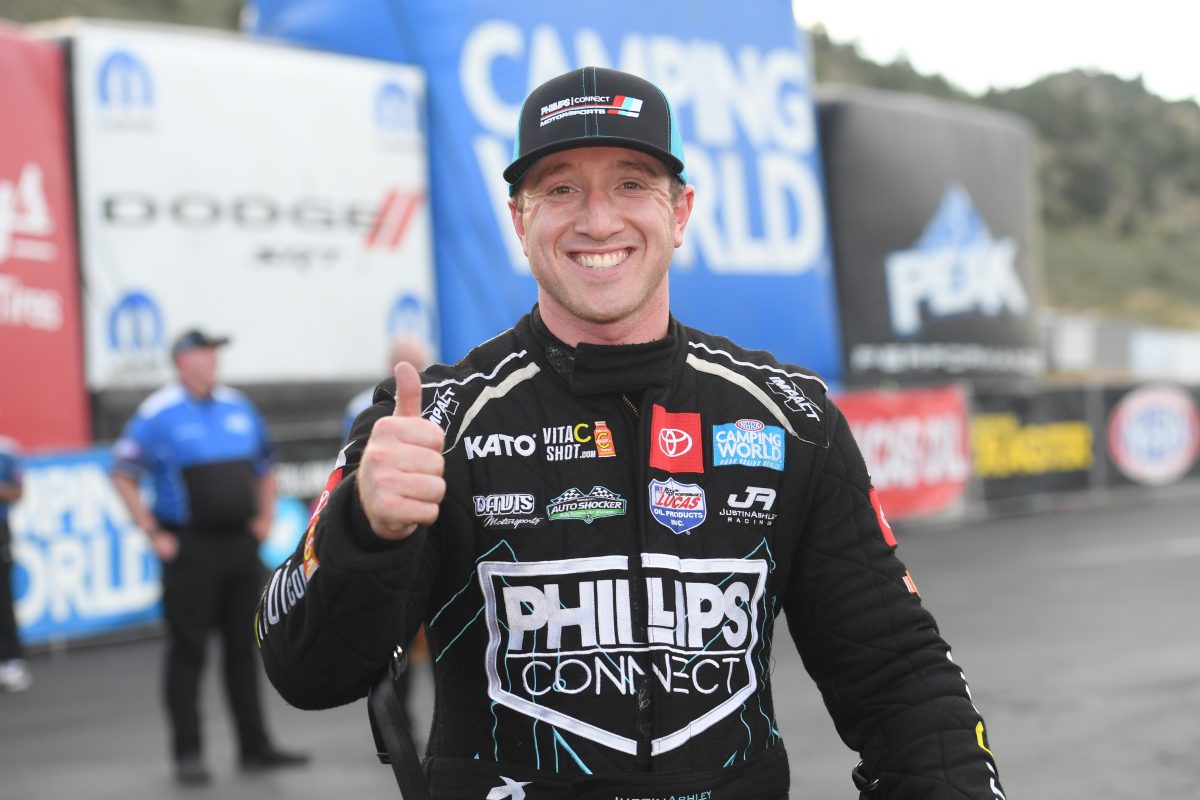 In Top Fuel, Justin Ashley will try to inch closer to points leader Mike Salinas with another solid result on the Western Swing. He advanced to the semifinals in Denver as the team continues to put together a strong season. The young star has put together a pair of wins and has advanced to four final rounds in a loaded Top Fuel class, putting him third in points in his 11,000-horsepower Phillips Connect Toyota Top Fuel dragster powered by Vita C Shot at the halfway mark.

He’s only 92 points out of first, but to keep moving up the standings Ashley will have to get past the likes of Salinas, Brittany Force, who has three wins this year, four-time defending Top Fuel champ Steve Torrence, who won last year in Sonoma, Denver winner Leah Pruett, Antron Brown, Josh Hart, and Doug Kalitta. But Ashley has been fueled by constant progress and that has been evident on the track.

“I have been talking all season about stacking round wins and making the most out of every round on the track,” Ashley said. “Last weekend was a perfect example of that process. We were able to go more rounds than the drivers in front of us and that has us in an even better position to challenge for the No. 1 spot going into the Countdown. We still have our work cut out for us, but we made progress in Denver. I am looking forward to racing in Sonoma again. Last year we qualified No. 7 and lost a close first-round race. It was a great race, but we want to go rounds in Sonoma this year.”

Pro Stock’s Aaron Stanfield drove to the win a year ago, capping off his hot summer stretch with his first Sonoma win. He’s picked up a pair of wins in 2022 to strengthen his championship contender status, but this season has belonged to his teammate, points leader Erica Enders. She has won five times already this year and will look to win in Sonoma for the first time as she aims for a fifth world championship. Top drivers to watch include Greg Anderson, whose six wins at Sonoma are the most in Pro Stock, Kyle Koretsky, Mason McGaha, rookie Camrie Caruso and 2015 winner Chris McGaha.

Karen Stoffer picked up her first victory at Sonoma Raceway a year ago and she’s impressed so far in 2022 as well. She made the quickest run in class history en route to her Gatornationals win and Stoffer will look for back-to-back victories in wine country. But trying to stop her are a host of talented riders in the two-wheeled category, including points leader Steve Johnson, defending world champ Matt Smith, Norwalk winner Angelle Sampey, Eddie Krawiec, who has three wins in Sonoma, Angie Smith, Bristol winner Jerry Savoie, Jimmy Underdahl and Joey Gladstone.

The event also will feature thrilling competition in the NHRA Lucas Oil Drag Racing Series, which includes some of the sport’s top drivers, as well as Top the Cops, Jr. Dragster and Street Legal exhibition runs.

For autograph-seeking fans, they can attend an autograph session featuring riders in Pro Stock Motorcycle at the Suzuki Display at 4:30 p.m. on Friday, while an autograph session featuring Toyota drivers will take place at 10:30 a.m. on Saturday at the Toyota Display. A special Denso Cornhole Challenge and autograph session will take place at the Denso Display in the Fan Zone at 10 a.m. on Saturday, giving fans a unique interactive opportunity. On Saturday, fans can also attend Nitro School to learn more about how the cars operate and reach their thrilling speeds.

Race fans at Sonoma Raceway can enjoy the special pre-race ceremonies that introduce and celebrate each of the drivers racing for the prestigious Wally on Sunday and includes the fan favorite SealMaster Track Walk. The final can’t-miss experience of any NHRA event is the winner’s circle celebration on Sunday after racing concludes, where fans are invited to congratulate the Denso NHRA Sonoma Nationals event winners.

As always, fans also get an exclusive pit pass to the most powerful and sensory-filled motorsports attraction on the planet in Sonoma. This unique opportunity gives fans a unique chance to see teams in action and service their hot rods between rounds, get autographs from their favorite NHRA drivers and more. Fans can also visit NHRA’s popular Nitro Alley and Manufacturers Midway, where sponsors and race vendors create an exciting atmosphere that includes interactive displays, simulated competitions, merchandise, food and fun for the entire family. The new Pep Boys midway display will include tire change challenges, oil change challenges, a slot car track and much more, adding even more excitement to the midway.

To purchase tickets to the Denso NHRA Sonoma Nationals, fans can visit www.sonomaraceway.com or call 800-870-7223.