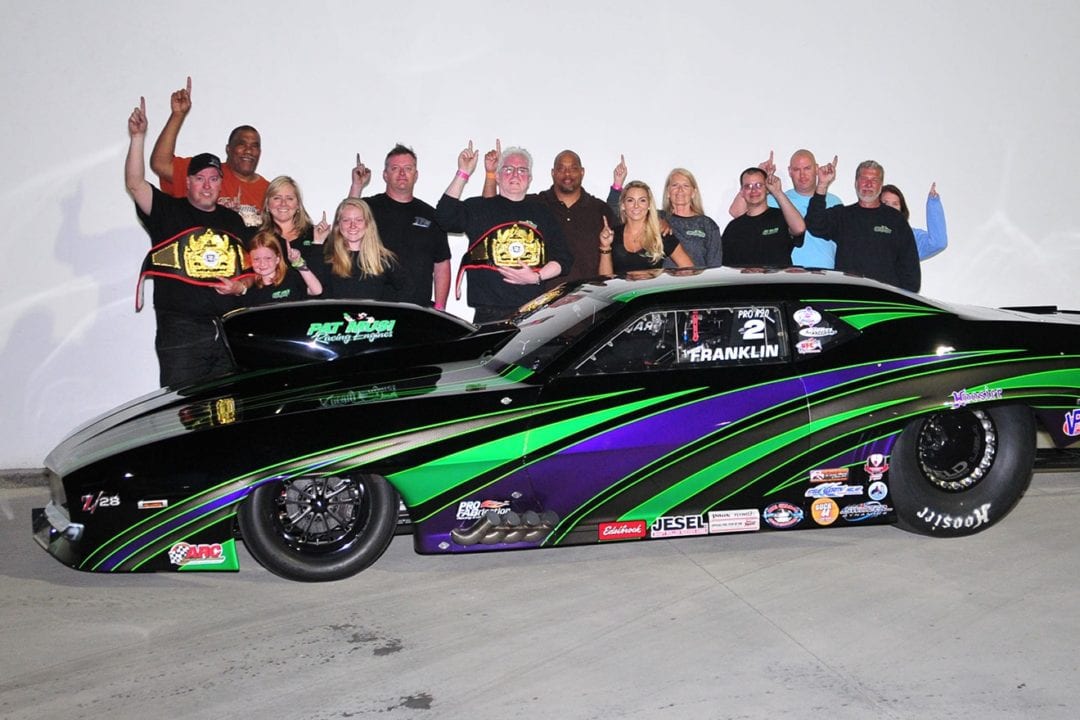 The 2016 Battle of the Engine Builders, a nitrous-only showdown, attracted some of the biggest names in Pro Mod racing. The event, which debuted in 2014 at Coastal Plains Dragway, was resurrected after a one-year hiatus and moved to one of the top eighth-mile facilities in the country, the completely overhauled GALOT Motorsports Park. Eleven racers represented six highly reputable engine builders.

Musi Racing Engines went straight to the front of the pack, with Tommy Franklin setting the pace in qualifying at 3.742 and Lizzy Musi right behind him at 3.748. Jay Cox put Buck Racing Engines in third with a 3.811. Reher Morrison sat fourth thanks to Steve Jackson’s 3.821 effort. Todd Howard took his Fulton Competition engine to fifth at 3.852. Then it was Musi power again in sixth, with Pro Mod legend Tommy Mauney posting a 3.854. Edward Wilson and Jamie Chappell rounded out the eight-car field with Fulton power, running 3.895 and 3.945 respectively. Jason Harris (Albert Racing Engines), Ed Burnley (Buck Racing Engines) and Travis Harvey (Sonny’s Racing Engines) did not qualify.

In eliminations, Tommy Franklin again set the pace with a 3.74 against Chappell. Wilson used an impressive holeshot to take out Lizzy Musi. Mauney took his freebie when Cox went red and “Stevie Fast” outran Howard, 3.78 to 3.97.

In the semi finals, Franklin stayed bracket-car-consistent with a 3.762 to earn his way to the finals over Jackson, who lifted early. Despite being an underdog, Wilson, as the hometown favorite, was cheered on to the finals as his 3.89 took out Mauney’s 3.97.

It was down to Musi vs. Fulton power for the finals of the Engine Builders Challenge. On paper, Franklin had the clear advantage, but Wilson pulled out his best number of the weekend, a 3.80, to give Franklin a good run for his money. Still, Franklin crossed the stripe first with a 3.76, continuing his streak of strong performances this season.

“Right off the trailer the car went A to B,” told Franklin, who will take the $10,000 prize money home to Fredericksburg, Va. “It went down the race track every single time. We had a really good, consistent weekend. The car was a bracket car. Our engine program is really good right now. We never had to work on anything.”

It was Franklin’s first time visiting GALOT Motorsports Park since renovations were completed, and he was very impressed with what he saw.

“The race track was beautiful. The whole GALOT Motorsports Park is a top-notch facility. It’s one of the nicest race tracks I’ve ever been to. The racing surface is so smooth. It’s unreal. It’s going to be a great facility for the event to grow there. We’re looking forward to racing there again with the PDRA, September 8-10.”

Franklin expects the Battle of the Engine Builders event to continue growing in popularity with fans and racers.

“There’s an underlying war between nitrous programs and events like this bring that to the forefront, really highlighting the hard work of these engine builders. When you get to go head-to-head against other engine programs, it allows the engine builders a chance to stick their chest out. Thankfully, Pat Musi has had a good program both times this type of event has been contested. There’s a lot of good competition out there. Edward Wilson was really impressive with his Fulton power and running a clutch. It’s exciting to see.”

As owner of the quickest recorded Pro Nitrous run to date, a 3.686 pass made at the PDRA season opener earlier this year, Franklin has been hot all season and doesn’t look to slow down any time soon.

“We’ve got a very good Jerry Bickel race car. Our Pat Musi engine has been very good. We’re really just trying to race smart, not going out there and beating ourselves. We have a good, competitive car and we can run up front all the time as long as we don’t mess ourselves up.”

Even after taking home a late Saturday night win at GALOT, Franklin, ever a family man, made it home in time to honor his own mother and the other half of Franklin Motorsports, wife Judy, for Mother’s Day.

“It’s a crazy life at times and we run, run, run, but it all works out. I’m blessed to be in the position that I am, racing at this level of competition and having success. It’s very rewarding.”