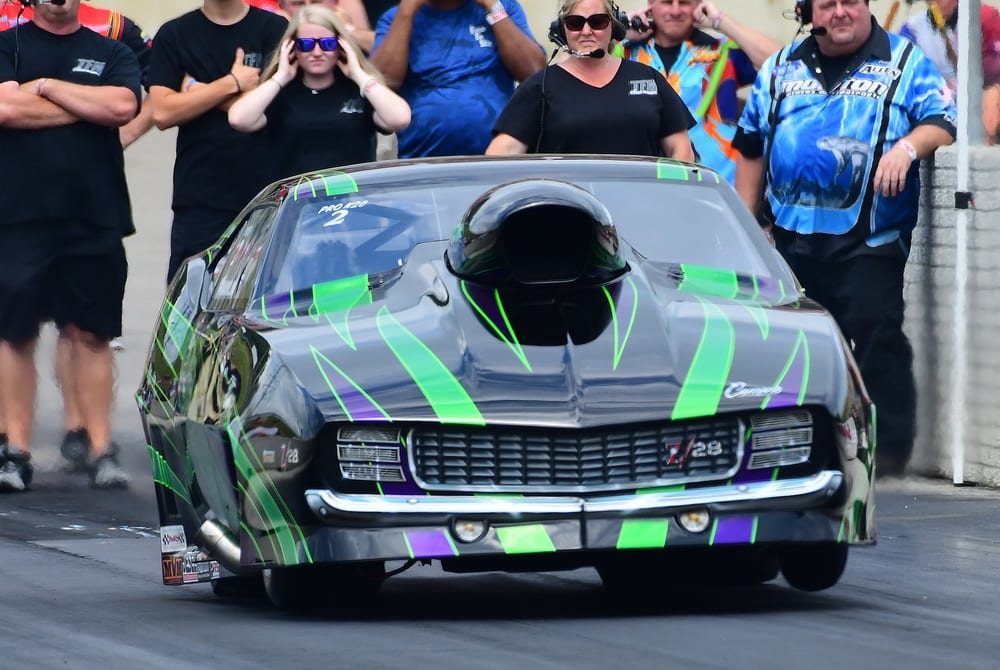 With an Accutime timing system that reads out to the ten-thousandth of a second, the No. 1 spot in Pro Nitrous was decided by just two ten-thousandths as Tommy Franklin’s 3.7023 in the Musi-powered “Jungle Rat” ’69 Camaro edged out points leader Jim Halsey’s 3.7025 in his Fulton-powered ’69 Camaro. The final session saw 10 of the 15 competitors run in the 3.70s, making Franklin’s accomplishment that much sweeter.

“I think it’s obvious that there are a lot of good players out here, but we’re after ourselves,” Franklin said. “This championship is out there and we want to go after it. We’re just trying to race smart and do our thing. We’ve got good power. The Musi power has been really good. Hat’s off to everybody out here. The teams are so good. This has to be the best class in racing right now. I love it. The competition just drives us to go a little bit faster.” 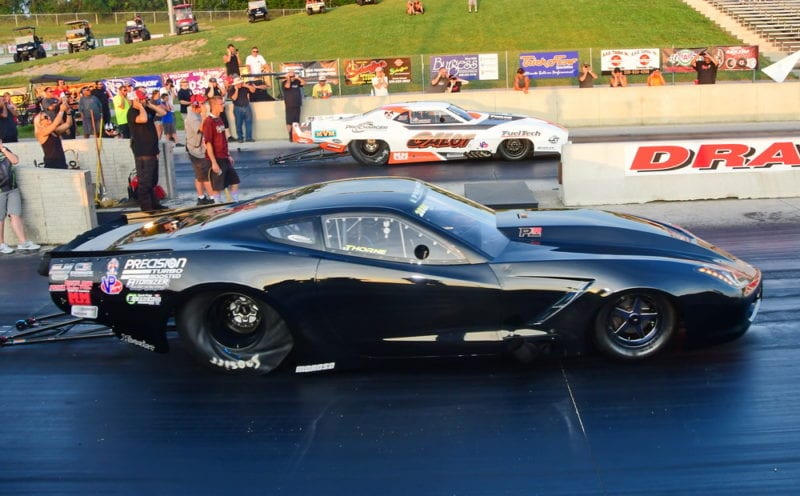 Kris Thorne wasn’t sweating the hot conditions in his Mikey Rees-tuned ’16 Corvette. The Florida native laid down a 3.733 at 213.78 in the twin-turbocharged, Pro Line Racing-powered entry during the third qualifying session, capping off a string of runs in the 3.70s. Thorne will start eliminations from the No. 1 spot for the third consecutive race.

“Everywhere we’ve ran well has been in the heat,” Thorne said. “We’ve actually kind of struggled with making more power in the cooler weather. We’ve always been really competitive and on our game in the heat. It’s actually where we shine. We’ve had a lot of heat this year, so the weather’s been on our side. With the twin-turbo power from Pro Line, everything’s really been working well for us.”

Thorne’s first-round opponent will be Pat Moore in former Cleveland Cavaliers player Larry Nance’s ProCharger-boosted ’68 Camaro. Kevin Rivenbark qualified No. 2 with a 3.754 at 197.89 in the ProCharged GALOT Motorsports ’69 Camaro, followed by the similarly ProCharger-equipped Coast Packing ’69 Camaro of Eric Gustafson with a 3.788 at 197.63. 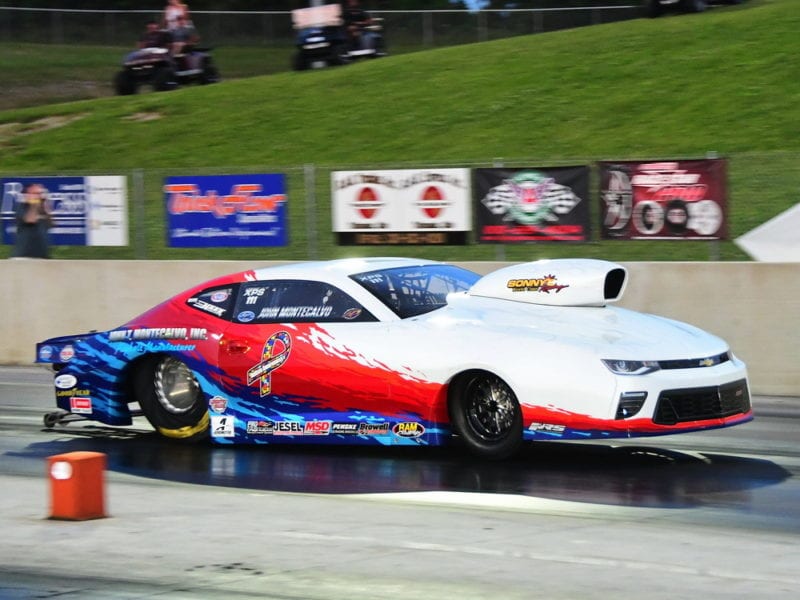 The ultra-competitive Extreme Pro Stock group showed off during Friday’s night session, as a trio of drivers recorded 4.15s to lead the eight-car field. Class veteran John Montecalvo was the quickest of the three with a 4.150 at 173.28 in his Tommy Lee-tuned ’18 Camaro. It was exactly what the New York driver needed as he chases the world championship from the No. 4 spot in points.

“It’s really been tough over here,” Montecalvo said. “It’s incredible that there were three .15s out there. We’re coming off a No. 1 and runner-up finish at Valdosta, the last race, so we have a bit of momentum going. Elijah [Morton] is running great, Chris [Powers] pulled one out, so I really didn’t know if our .15 was going to hold up. It’s really tough over here and it’s getting tougher every day. We really needed those qualifying points. I’ve lost the championship by 12 points before and that was basically on qualifying points, so now every position counts.”

Montecalvo and his Sonny’s-powered Camaro will take on Johnny Pluchino in the Strutmasters.com ’13 Ford Mustang to start Saturday eliminations. Powers qualified No. 2 with a 4.151 at 173.14 in the Sonny’s-powered ATI Performance Products ’14 Camaro. Rounding out the top 3 is Morton and his 4.157 at 173.68 in the Allen-powered Morton Brothers Motorsports ’18 Mustang. 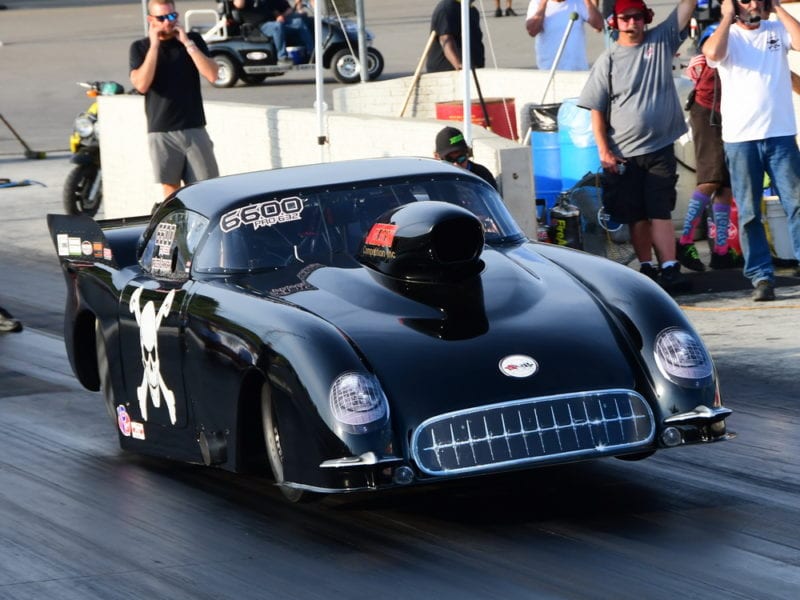 While the Northern Nationals is an off-weekend for the Schwing America Pro Outlaw 632 presented by Precision Chassis and East Side Auto Transport class, eight drivers made the trip to Dragway 42 to compete in the $7,500-to-win Pro Outlaw 632 Shootout presented by $hameless Racing.

Walter Lanningan Jr. in his nitrous-assisted, Nelson-powered ’53 Corvette qualified No. 1 for the $hameless Shootout, posting a 4.317 at 165.87. Wes Distefano grabbed the No. 2 spot in his nitrous-assisted, Musi-powered $hameless Racing ’68 Camaro with a 4.329 at 166.79. Tony Gillig represented for the naturally aspirated crowd, running a 4.397 at 160.26 in his Madcap-powered Gillig-Wagner Motorsports ’96 Oldsmobile Cutlass. 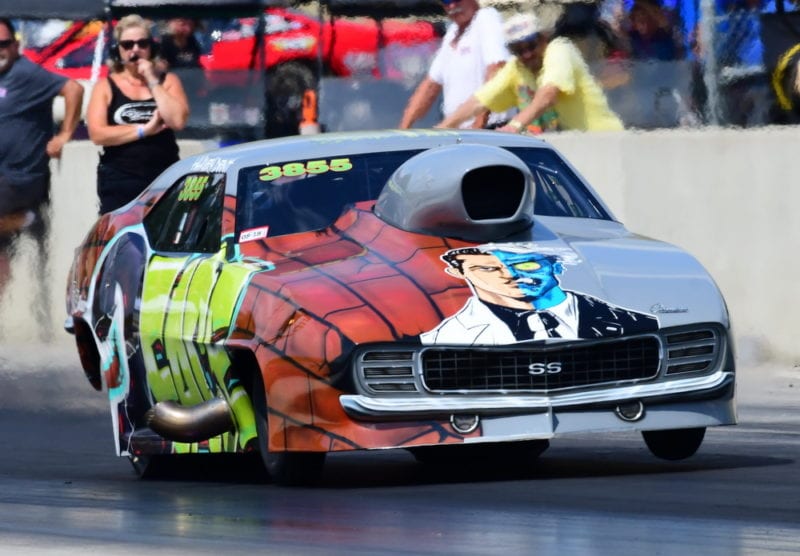 A trio of nitrous-assisted entries raced to the top of the qualifying order in Elite Top Sportsman. Aaron Glaser is the provisional low qualifier with his 4.012 at 184.73 in the “2Face” ’69 Camaro, followed by Gary Grahner in his ’63 Corvette with a 4.043 at 184.50. Travis “The Carolina Kid” Harvey, who won this month’s Big Dog Shootout at Piedmont Dragway in North Carolina Thursday night, ended up third in his’14 Camaro after running a 4.044 at 177.30. 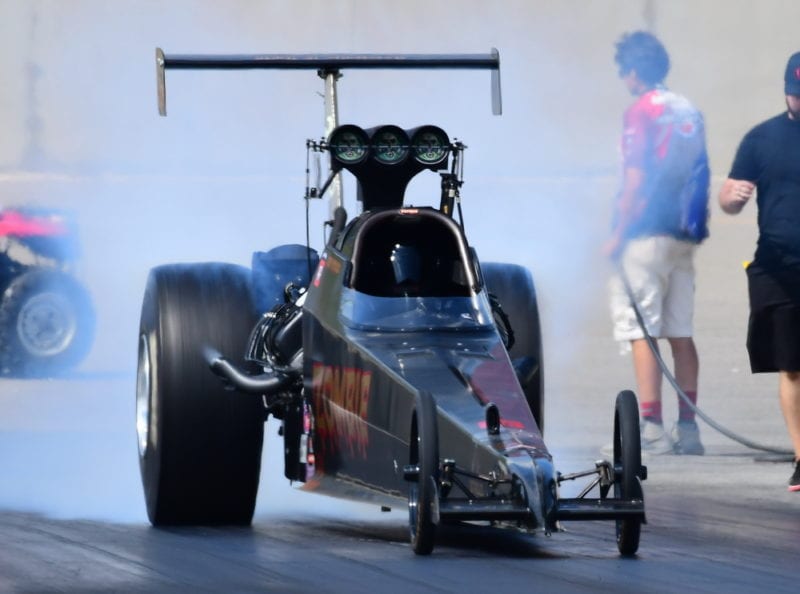