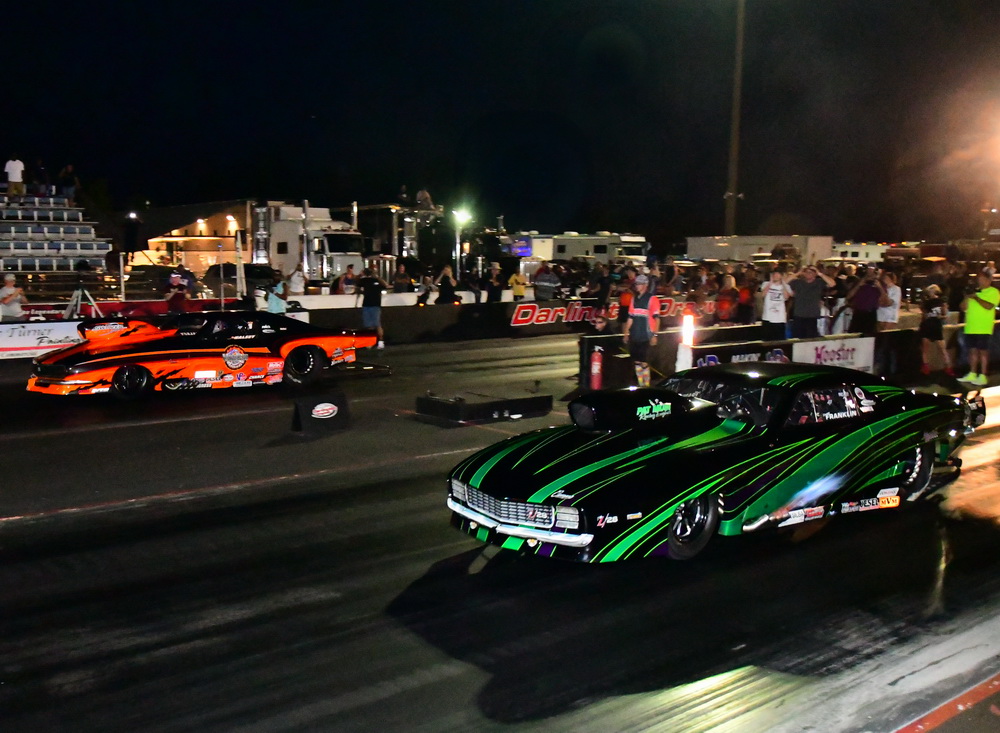 In the Jr. Dragster classes, Kaylee Love ran a perfect 7.900 in her ’17 Halfscale dragster to defeat Nyckolas Shirkey in the Coolshirt Pro Jr. Dragster final round. Shirkey’s younger brother, Zach, had better luck in Gilbert Motorsports Top Jr. Dragster, going 8.965 on a 8.95 dial-in to take down Spencer McGee in the final round.

Rinse and repeat was the order of business for Tommy Franklin at the Carolina Showdown. He matched his performance from the season-opening East Coast Nationals in late May, qualifying No. 2 and winning the race. His Musi-powered “Jungle Rat” ’69 Camaro was locked in the 3.60s through eliminations, recording low E.T. of each round. Franklin set low E.T. of the event in the final round with a 3.648 at 204.73 alongside No. 1 qualifier Jim Halsey, who slowed to a 4.492 at 119.33.

“The goal is to win every one of [the races],” Franklin said. “But I think that’s everybody’s goal when we pull in. That’s all we try to focus on. I say it all the time: this is the toughest competition in drag racing. There’s some awesome teams out here: Halsey, [Jay] Cox, [Chris] Rini, Lizzy Musi. All of them are just super-fast, so to outrun them and be quick of the event just means a lot.”

Halsey easily moved past first round with a 3.733 while Tony Wilson didn’t record a time in the other lane. He stepped up to a 3.699 on a competition single in the second round, then ran a 3.845 to defeat Andrew Handras in the semifinals. 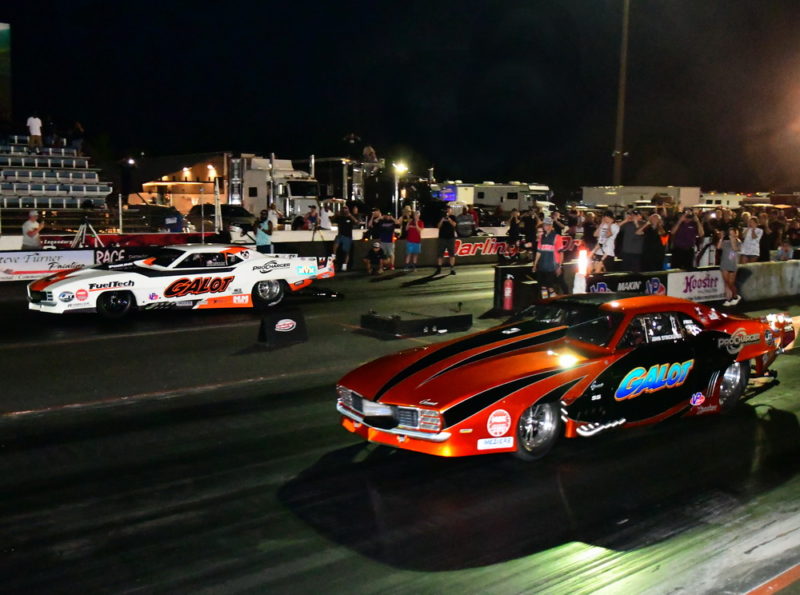 It was an all-GALOT Motorsports, all-ProCharger-boosted, all-Pro Line-powered, all-’69 Camaro final round in Pro Boost, as teammates John Strickland and Kevin Rivenbark squared off in a final round for the first time since 2016. Strickland used a holeshot advantage and 3.668 at 202.16 to finish ahead of the defending world champion and his 3.684 at 203.71.

“It’s been a long time since an all-GALOT final,” said Strickland, who was the runner-up at the last race. “This is our second year with the Pro Line group, so it was really exciting for the whole group to be a part of a GALOT team final. [Team owner] Mr. [Earl] Wells has done a really good job of putting us in situations where we have some of the best equipment and the best people with us. We couldn’t ask for a better group of guys to work with. They’re constantly improving. ProCharger stepped up and they’re improving their product all the time and giving us what we need to be successful.”

Strickland’s “Dirt Digger” ’69 Camaro improved on each pass in eliminations, starting with a 3.725 at 201.88 to eliminate Clint Satterfield. He dipped into the 3.60s with a 3.695 at 202.61 over Johnny Camp’s 3.726 in the second round. In one of the best races of the day, Strickland grabbed a slight starting line advantage over Randy Weatherford and held the lead through to a 3.661 at 203.34 victory over Weatherford’s 3.67 in the semifinals.

Rivenbark was only about a number off Strickland’s pace through race day. He was quicker with a 3.722 to beat Eric Gustafson in the first round, then raced past Derek Ward with a 3.73. Semifinal opponent Jason Harris went .002 red to negate his 3.692, but Rivenbark was ready with a 3.675 at 204.08. 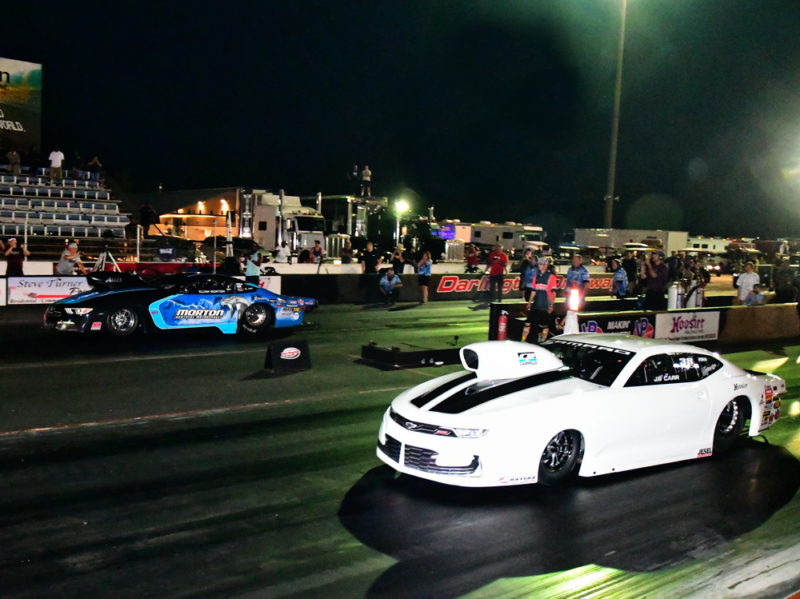 A wire-to-wire performance put JR Carr and his brand-new RJ Race Cars-built ’20 Camaro in the PDRA Extreme Pro Stock winner’s circle for the first time. The Mountain Motor Pro Stock veteran recorded low E.T. of the event, a 4.035 at 178.50, in the final round to defeat Elijah Morton and his 4.113 at 175.37 in his Allen-powered Morton Brothers Motorsports ’18 Mustang.

“I’ve had wins in other series, but this series is tough,” Carr said. “I’m not an eighth-mile guy. They had to kind of convert me. Tommy and Judy [Franklin, PDRA co-owners] and Tyler [Crossnoe, series director], they’re good people and they do a great job. These are top-notch cars. The competitors, they want to tear your head off every time you line up. This is just a brutal deal. We won today, and I’m tickled pink.” 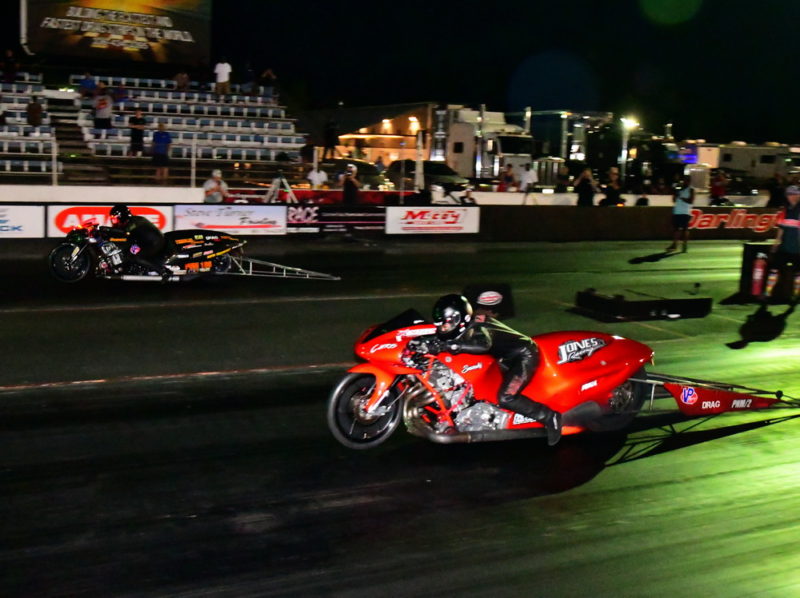 Even though he won the East Coast Nationals at GALOT Motorsports Park in late May, defending world champion Travis Davis wanted to make some changes to his Timblin-built Hayabusa for the Carolina Showdown. When those changes didn’t work, Davis returned to what worked at GALOT. It worked again, as he strapped a holeshot advantage on Chris Garner-Jones in the Pro Nitrous Motorcycle final round and held on with a 4.045 at 175.71 to beat Garner-Jones’ quicker 4.003 at 172.91.

“It’s nice to go back to back,” Davis said. “We hadn’t done anything to the bike since we left GALOT. The day before we got here, I changed the nitrous system completely. Put a whole different system on it. Tried it during the three qualifiers, didn’t like what I seen and went back to the old setup for first round. We ran all weekend with no Racepak data until after first round. I got data and then I was able to start picking it away. We’re still behind on the performance side a little bit, but you win ’em how you can win ’em.”

Garner-Jones was on pace to back up his No. 1 qualifier performance with a victory. He set low E.T. of each round, beginning with a 4.037 to easily defeat Gerald Smith. His 4.02 on a semifinal single gave him lane choice in the final round. 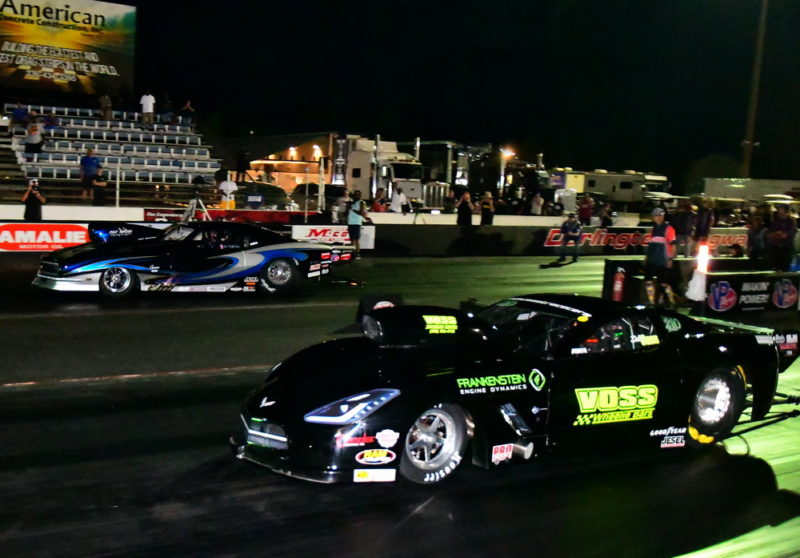 A DNQ at the East Coast Nationals motivated 2017 Pro Outlaw 632 world champion Dillon Voss and his family-based team to rebound in a big way at the Carolina Showdown. He qualified No. 2 in his Voss-powered ’17 Corvette and steadily improved to a winning 4.21 at 170.52 alongside Wes Distefano’s 4.25 at 170.20 in his Musi-powered $hameless Racing ’68 Camaro in the final round.

“We’re going hard after points this year,” Voss said. “DNQ’ing at GALOT was a hard setback. We actually met No. 1 in points [Walter Lannigan Jr.] in the semis, so we gained a couple rounds of points on him. Man, we literally went from zeroes to heroes this weekend. It feels really good. The car is running awesome. My dad [Kenny], Cory, Mark, my wife [Heather], all of them, are just doing a hell of job to get the car in the order it needs to be to chase a championship this season.”

Distefano, the No. 1 qualifier and defending winner at Darlington, opened eliminations with a safe 4.307 to beat the 4.778 of Mike Murphy. The Michigan driver earned an odd semifinal victory when Chris Holdorf left before the tree activated. Still, Distefano laid down a 4.236. 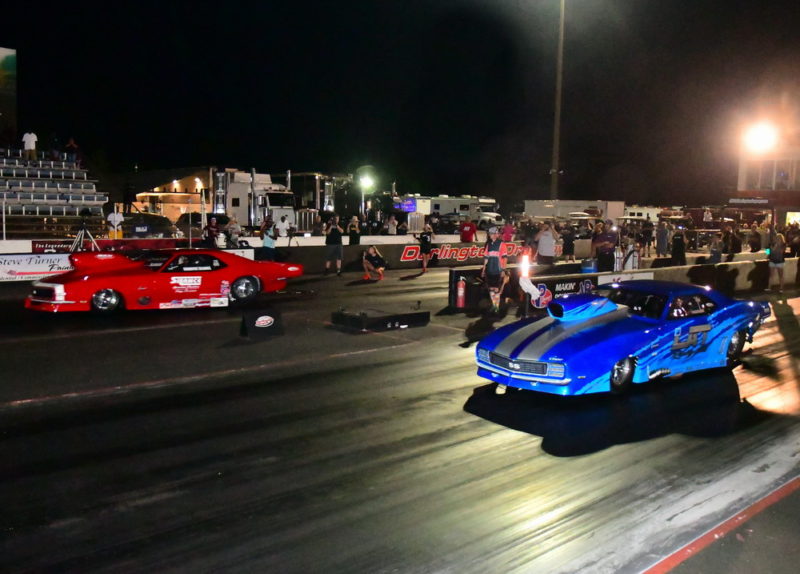 Past world champion Dewayne Silance added another PDRA 660 Man trophy to his trophy case after he put together a 4.043 on a 4.02 dial-in in his Buck-powered ’68 Camaro to defeat Buddy Perkinson in the Elite Top Sportsman final round. Perkinson, racing in his second consecutive final round, cut a .001 light and went 3.818 on a 3.78 dial-in in his Musi-powered ’69 Camaro. 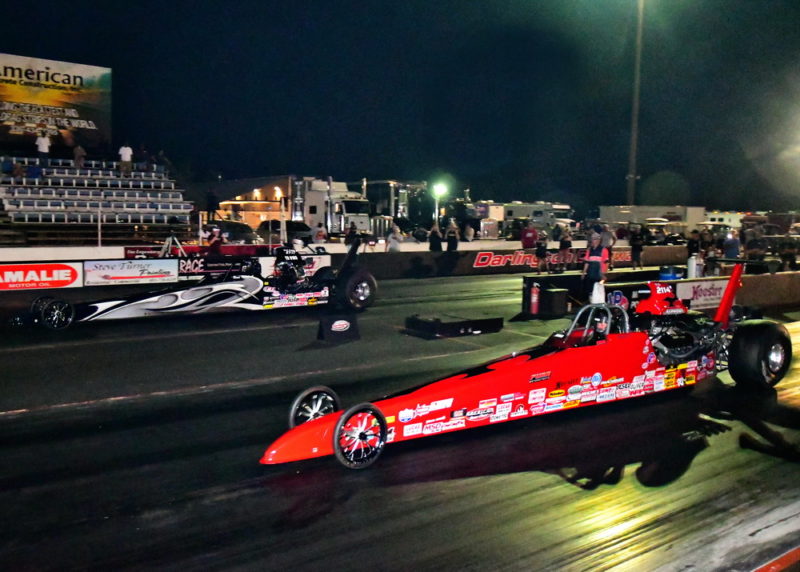 North Carolina sportsman racing hitter Steve Furr scored his second consecutive Elite Top Dragster victory, this time using a 3.926 on a 3.88 dial-in in his ’13 American dragster to defeat Russ Whitlock in the final round. Whitlock in his ’08 Race Tech dragster slowed from his 3.90 dial-in to a 4.017 in the runner-up effort.

Next month, the PDRA heads north for the North-South Shootout presented by Frederick Line-X, July 16-18 at Maryland International Raceway in Budds Creek, Maryland.