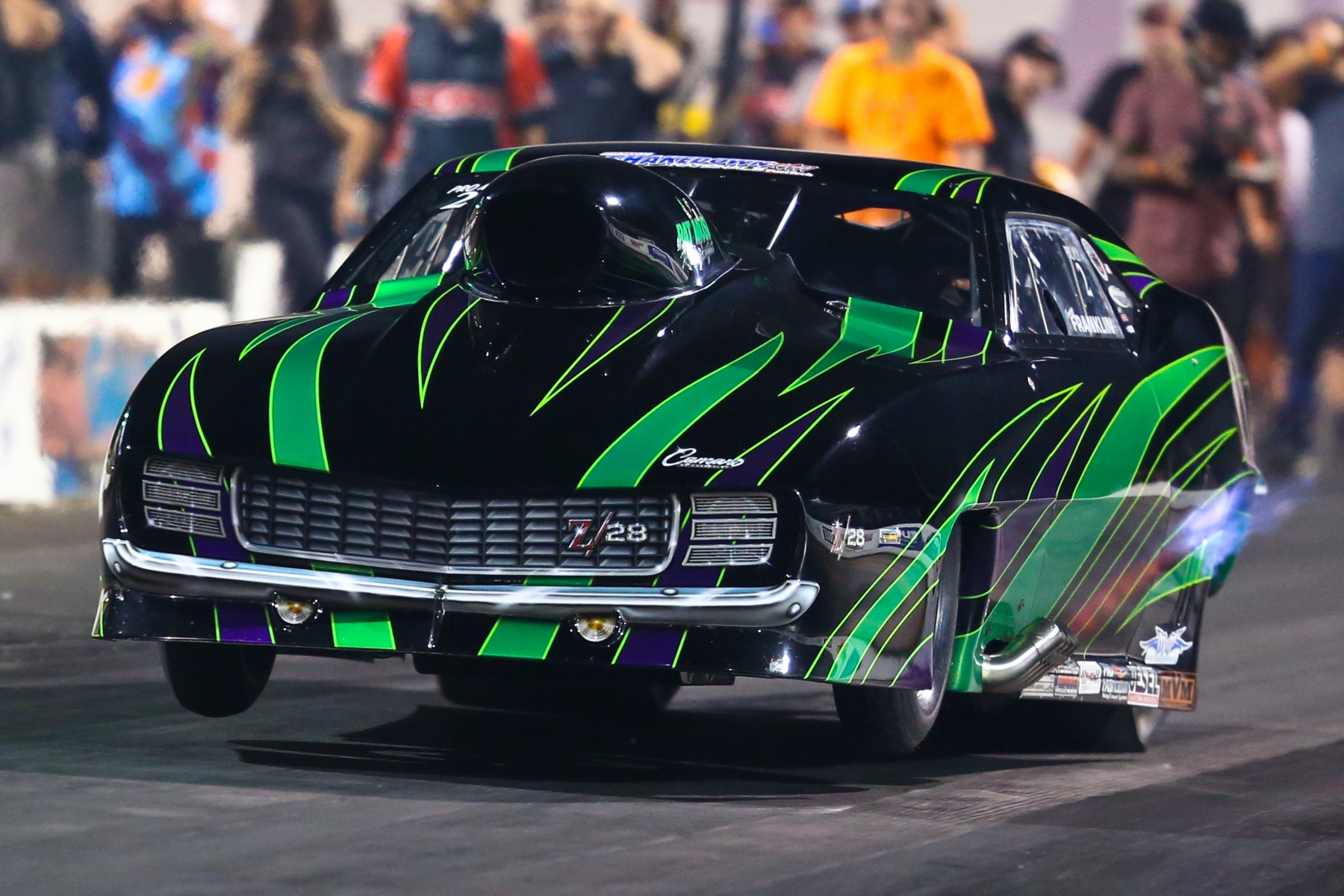 Ethan Steding and Alyssa Rabon were the winners in the PDRA’s Jr. Dragster classes. Steding, the son of Pro Boost hitter Kurt Steding, left the starting first and ran a 7.917 on a 7.90 index to defeat Brooks McMath’s too-quick 7.884 in the Coolshirt Systems Pro Jr. Dragster final round. Rabon left the starting line first in the Classic Graphix Top Jr. Dragster final round and posted a 9.073 on a 9.03 dial-in to beat Ashton Halas’ 9.029 on an 8.98 dial-in. 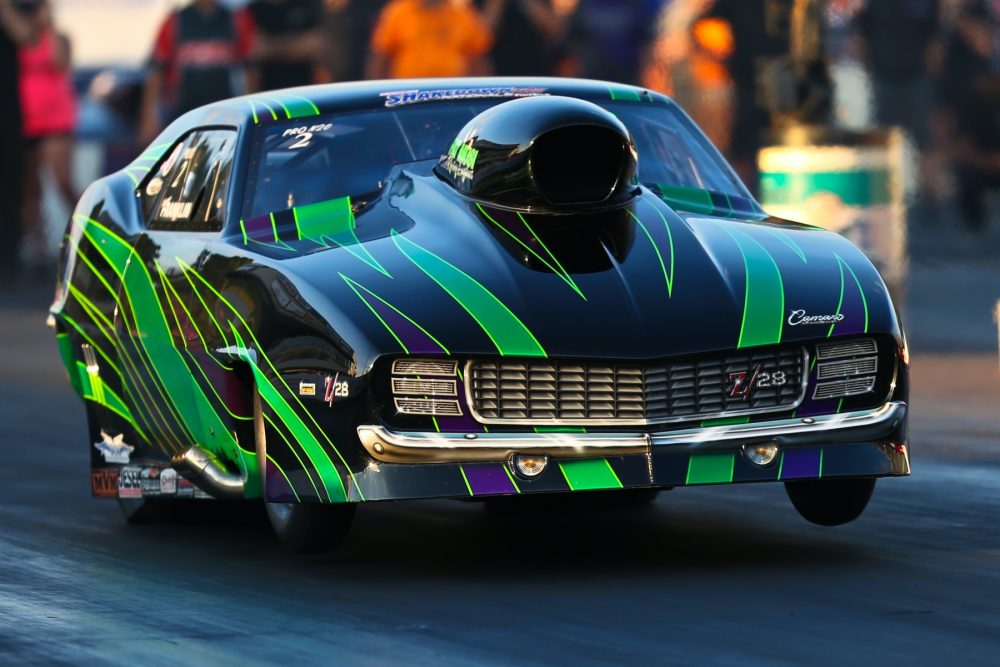 Tommy Franklin’s late-season hot streak continues to build, as he secured his first PDRA win of the season after winning in Pro Modified at Virginia Motorsports Park’s Shakedown Nationals in September. Plus, his daughters, Amber and Ashley, enjoyed success of their own, with Amber taking runner-up honors in her Pro Outlaw 632 debut and Ashley reaching the semifinals in Pro Jr. Dragster. In the Pro Nitrous final, Franklin piloted his Musi-powered “Jungle Rat” ’69 Camaro to a 3.666 at 203.16 to knock off two-time world champion Jason Harris and his 3.709 at 203.71.

“The most exciting part is watching my kids, there’s no doubt,” said Franklin, crediting manufacturers like Pat Musi Racing Engines, Jerry Bickel Race Cars, and Ty-Drive. “They were both just killing it out there. Ashley went red in the semis, but she was dangerous on the tree all weekend. Amber obviously exceeded expectations as well. We just got out there and we’ve got a hot rod. This thing ran really good at Shakedown. We’ve been lost a little bit most of the year, just trying new things, trying to get it to work. Sometimes that’s what it takes. We’re on a good hot streak right now. We’ll take it. Thank you, everybody who supports us. Thank you, PDRA. Thank you, God, for everything we do. I say it all the time, it’s not all about one person. There’s so many people that make it happen.” 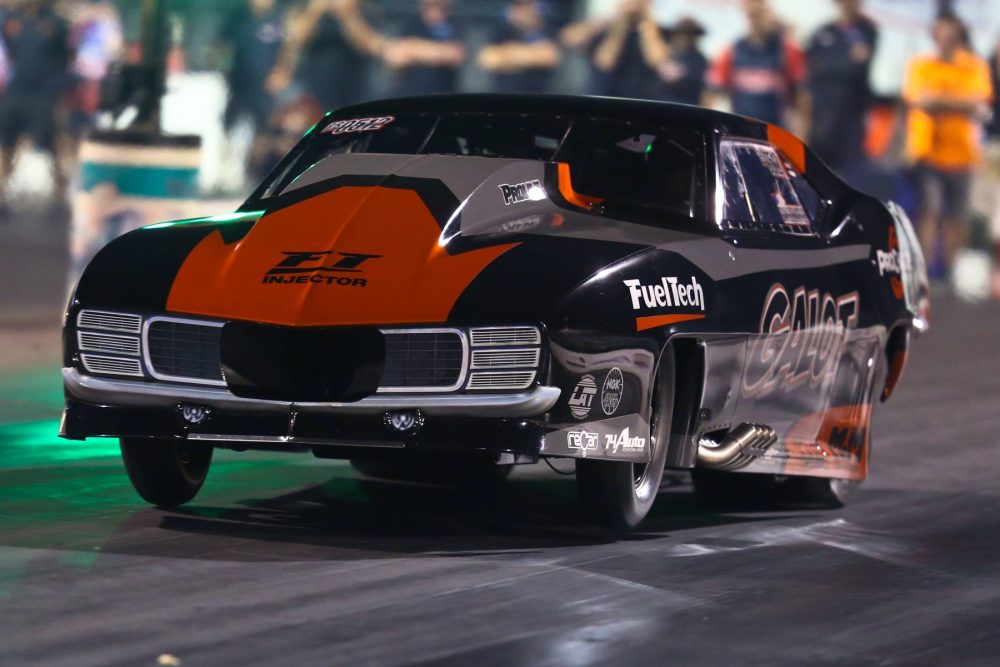 A weekend that started with a low – Pro Boost points leader Kevin Rivenbark crashing his GALOT Motorsports ’69 Camaro in Thursday testing – ended in a high point when Rivenbark’s teammate, Daniel Pharris, delivered a home-track win for the team. Pharris drove his Steve Petty-tuned, ProCharger-boosted GALOT Motorsports ’69 Camaro to a 3.641 at 206.95 in the final round to finish just .002 seconds ahead of Todd Tutterow’s 3.652 at 208.04. It was Pharris’s second win of the season, moving him into championship contention going into the final race of the season.

“We did this for GALOT Motorsports,” Pharris said. “This was 100 percent a team effort. We lost a car earlier in the week on Thursday. It was just a very unfortunate deal. I knew Tutterow was going to be tough, so I just went up there loaded for bear. Mentally, it was pretty crazy to just be able to beat somebody like him. I grew up watching him race. To be able to compete at this level and actually win and contend in the points for a championship is just a dream come true. It’s always been something I wanted to do. The level of professionalism with this race series is just unbelievable. I don’t know if you can go any higher than this. It’s pretty cool. It was a group effort getting Kevin’s car flipped back over and getting him back in a car [Stan Shelton’s screw-blown Culp Lumber ’19 Mustang] to hopefully stay up in the points. We pulled it off together.”

Tutterow, who was appearing in his third consecutive final round, qualified No. 4 in his screw-blown P2 Contracting ’20 Camaro. He got progressively quicker through eliminations, using a 3.705 to beat Josh Chester, a 3.684 to defeat Melanie Salemi’s 3.71, and a 3.672 to knock out Johnny Camp’s 3.653 on a holeshot in the semis. 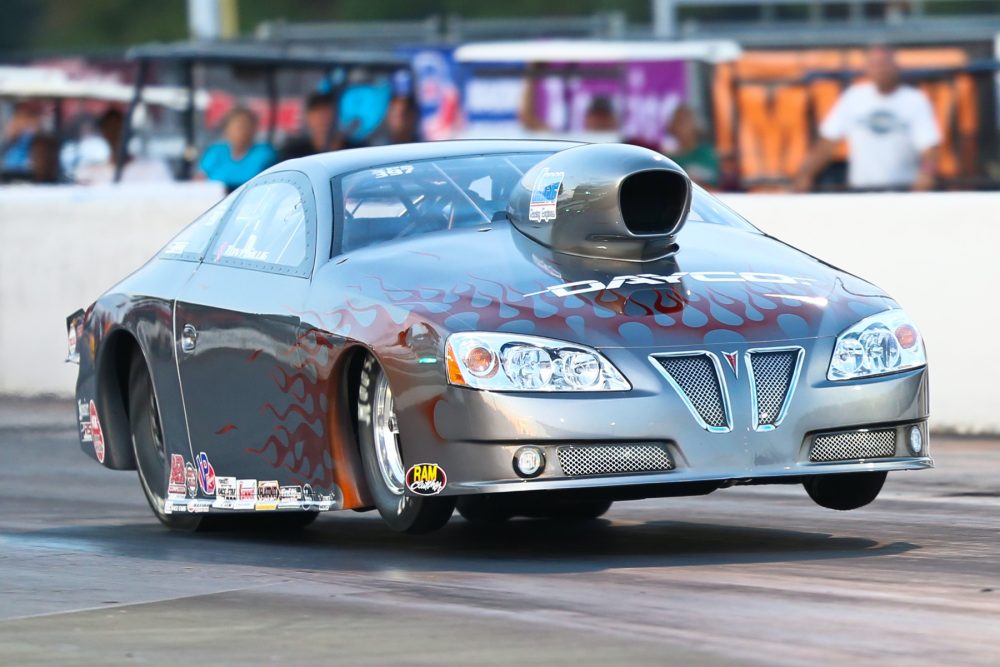 Mountain Motor Pro Stock veteran Tony Gillig enjoyed a storybook weekend as he made his return to Extreme Pro Stock. Driving his family’s new Gillig-Wagner Motorsports ’10 Pontiac GXP, Gillig strung together three holeshot round wins before defeating low qualifier JR Carr in the final round. Gillig left the starting line first again in the final round and sealed the deal with a 4.142 at 174.71 ahead of Carr’s 4.21 at 174.64.

“All I can say is I’m a little shell-shocked,” said Gillig, who thanked his team led by his father, Bob Gillig, and brother-in-law Billy Wagner, as well as supporters like Jon Kaase Racing Engines, Ram Clutches, Flatout Gaskets, Summit Racing Equipment, Race Star Wheels, VP Racing Fuels, NGK Spark Plugs, and Dayco. “I drove the best I could today. This car and I are just an awesome fit. I was so comfortable up there every round. Everyone involved in this car is part of the puzzle. Every piece has to be there. I couldn’t be any happier. It was just an awesome, awesome day for all of us.”

Carr qualified No. 1 for the seventh time in seven races this season in his Gugliotta-tuned CP-Carrillo/Maxima Oils ’20 Camaro. The Washington native won first round over Lester Cooper, then set low E.T. of eliminations with his 4.088 to eliminate Jeremy Huffman in the second round. He simply took the tree on his semifinal bye run. 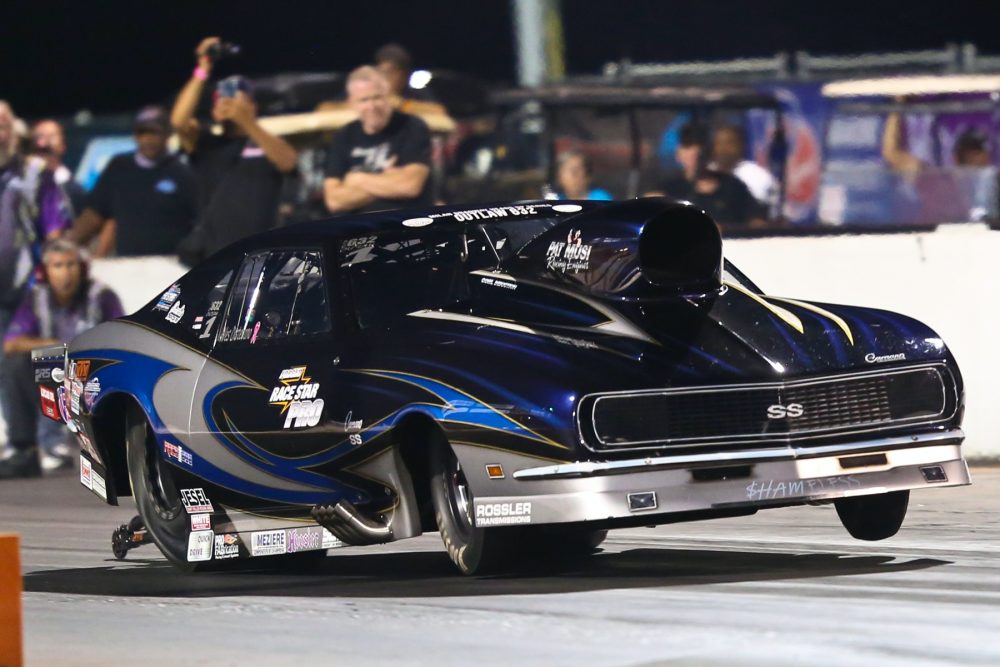 Pro Outlaw 632 points leader Wes Distefano went into the weekend with a good chance at clinching his second consecutive world championship. Distefano and his nitrous-assisted, Musi-powered $hameless Racing ’68 Camaro were both on their A-game throughout the weekend, as Distefano qualified No. 3 and clinched the championship before defeating rookie Amber Franklin in the final round. Franklin grabbed a starting line advantage, but Distefano powered past her with a 4.18 at 171.56 to her 4.219 at 166.37.

“[Winning the championship] was obviously our goal,” Distefano said. “It’s always good to achieve our goals. We’re not done yet. I was cutting good lights. I think we went .002 [in the semifinals], so I was a little worried after that that we were getting a little too close to red. I tried to back it down in the last round and knew we had a good chance to run with Amber. Overall it just took consistency, the same thing my team always does. We work together, we all do our jobs and this is the outcome.”

Franklin, who was making her debut in the Musi-powered “Jungle Rat” ’69 Camaro formerly driven in Pro Nitrous by her father, qualified No. 4 and picked up round wins over Robert Sellers and Douglas Nicholl. Franklin came up short in her semifinal match with Chris Holdorf, but when Holdorf came up light at the scales after the run, Franklin and her 4.275 pass were reinstated to face Distefano in the final round. 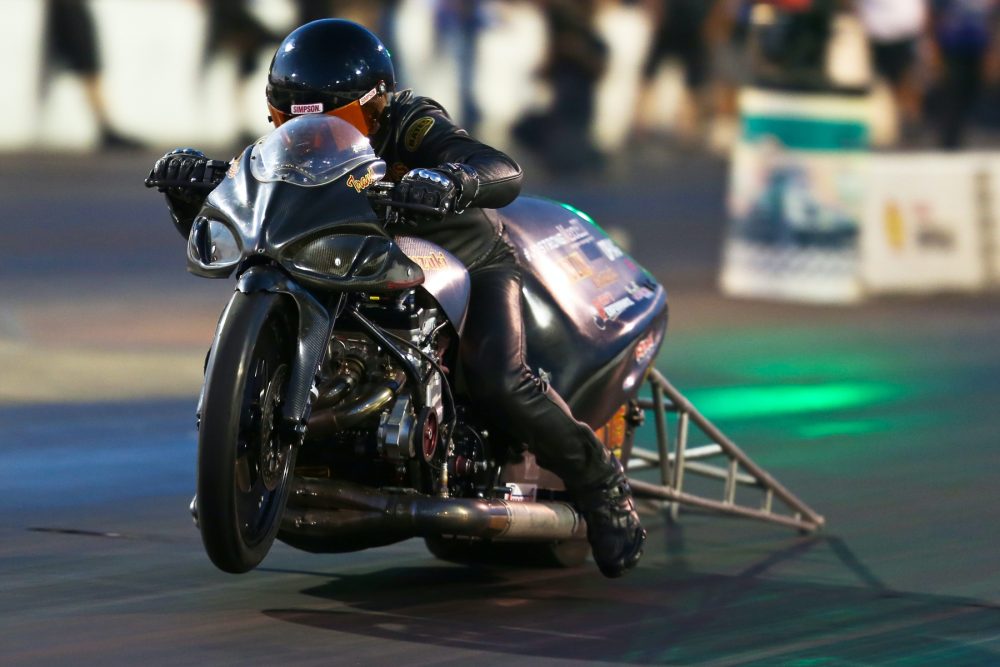 Travis Davis started his Pro Nitrous Motorcycle championship defense season with a clean sweep at GALOT Motorsports Park earlier this season. The Georgia native repeated the sweep at DragWars, qualifying No. 1 and securing the event win aboard his Timblin Chassis Hayabusa. Davis used a slight holeshot advantage to defeat Meshal Alsaber in the final round, beating Alsaber’s 3.995 at 174.98 with a 3.996 at 176.67. The win gave Davis a valuable boost in his championship battle with Chris Garner-Jones.

“It was great to get the win,” said Davis, who thanked his wife, Brandy, son Brayden, and supporters Steve Nichols with Maxx ECU, Dan Wagner with DTM Performance, Dalton Perry with Perry’s Performance, and Monster Race Heads. “That was the biggest thing, to come here, try to out-qualify [Garner-Jones], and win the race. If we keep doing that, we should hopefully get the championship at the end of the year.”

A pair of past world champions squared off in the Elite Top Sportsman final round, as defending champion Buddy Perkinson and 2018 champion Donny “Hollywood” Urban raced in their ’69 Camaros. Both drivers left the starting line with .023 reaction times, but Perkinson held on in his Musi-powered LAT Racing Oils entry to win with a 3.857 on a 3.81 dial-in, while Urban slowed to a 4.441 on his 3.90 dial-in in his Nesbitt-powered hot rod. Urban was the defending event champion.

The Top Sportsman 32 final round was an East Coast vs. West Coast battle featuring New York’s Dan Germano and California’s Joe Roubicek, both in nitrous-fed ’68 Camaros. Germano went red by .014, giving the win to Roubicek, who followed through with a 4.227 on his 4.21 dial-in.

Reigning world champion Steve Furr and 2021 championship contender Peter Maduri were the last two drivers standing in Elite Top Dragster. Furr proved why he won the championship, using a .010 light and a 3.899 on a 3.89 dial-in in the final round to eliminate Maduri and his 3.778 on a 3.76 dial.

Consistent late-round finishers Dickie Smith and Nick Meloni raced through four rounds to meet up in the Top Dragster 32 final round. Smith in his Waldorf, Maryland-based ’18 Race Tech dragster cut a .007 light and ran a 4.367 on a 4.36 dial-in to secure the win. Meloni’s .014 reaction time and 4.265 on a 4.26 dial were strong, just not enough to beat Smith’s package.

The 2021 PDRA season will conclude in two weeks at the Brian Olson Memorial World Finals presented by ProCharger, Oct. 14-17 at Virginia Motorsports Park in Dinwiddie, Virginia.