Life hands us unwelcome challenges for reasons we can’t explain, but few have faced steeper ones than Dan Parker, who lost his eyesight 10 years ago in a wildcard accident while testing at Alabama Dragway. Despite this, he has turned around every waking moment possible to achieve something few could imagine: on March 31, he reset the world record for the fastest blind driver with a two-way average of 211.043 – on the anniversary of the very day his life was forever changed.

Drag Illustrated has spoken to Parker in the past about his plans to tackle the Guinness World Record for the fastest blind-folded driver, which was previously held at 200.51 mph by Mike Newman, who was also fully blind. The record’s technical claim, blindfolding, is done to equalize the playing field here for varying levels of sight impairment, necessitating the visor in Parker’s case to be blacked out despite his total loss of vision. Still, the feat is no less impressive. The 200-mph club is a tough nut to crack in land speed racing for anyone, much less someone doing so without what many would consider a critically important human sense: the ability to see the road ahead.

How does one dig out of the depths to reach soaring heights? You’re about to find out as we dig into the details of Parker’s record run at Spaceport America.

First and foremost, Parker’s record attempt is assisted with a GPS-based guidance system along with the presence of a co-driver with duplicated driver controls. Primarily, Parker uses a pair of earbuds under his helmet to listen for a rising-pitch tone out of the left or right side, which indicates to him how far off-center he is while on course. If things go too far sideways, then his co-driver, ECTA racer Jason White during this record run, can grab the duplicated controls and bring the Corvette back in line, something that had to happen a few times during the week as winds blasted the plains of New Mexico while storms pushed every which way.

Patrick Johnson is responsible for developing Parker’s guidance system. Based on Linux, the system takes high-speed GPS data along with input from various motion and direction sensors to accurately locate Parker within a few millimeters of reality, and provide feedback that helps to guide him back on course. It’s a system that began development with Parker’s AMA record run during the 2013 BUB Motorcycle Speed Trials at Bonneville, but stands in contrast to the system used by the National Federation of the Blind’s original haptic feedback system, which utilized vibration motors in a glove to indicate which inputs a blind driver needed. 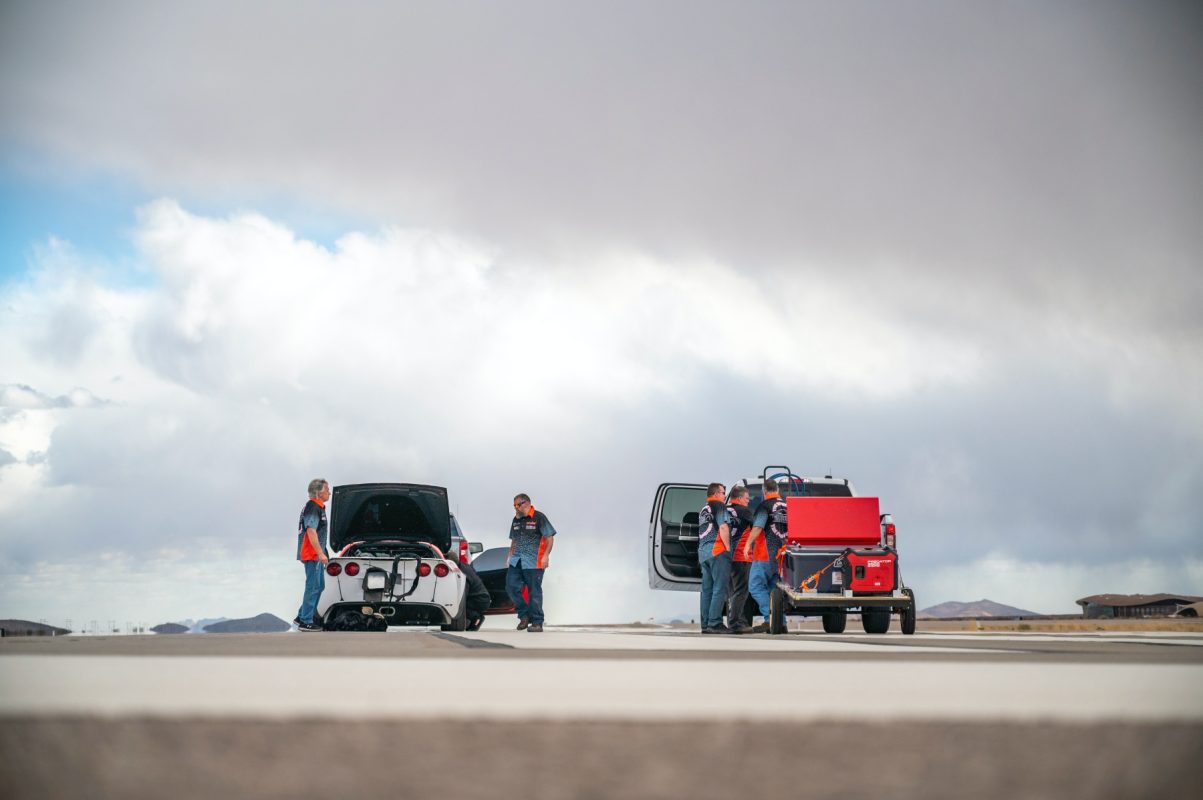 The service cart contained everything needed for the turnarounds: a generator and inverter to keep the battery topped off, a coolant pump attached to a radiator for bringing the water reservoir temps down, or coolers for ice water to outright exchange the entire volume of water.

Speaking of which, the NFB have been one of Parker’s largest supporters, not just giving him the skills to reclaim a normal, daily life, but also in pursuing this land speed record on the heels of their Blind Driver Challenge, where current NFB president Mark Riccobono became one of the first to drive a vehicle totally blind during an exhibition at Daytona International Speedway.

A 440ci LS3-based unit from 3V Performance belches out 785 horsepower and 645 lb-ft naturally aspirated. To fine-tune the power delivered for the record run, a 150-shot can be toggled to be auto-triggered by the Pro EFI ECU in second and third gear, relieving Parker of the additional attention budget. An air-shifted TH400 is also controlled via Pro EFI, built to handle the additional power while dolling it out smoother with the taller gearsets, compared to the closer-ratio factory 6L80E.

At the end of March, Parker and his crew trucked to Spaceport America, an aerospace testing and launch facility near Truth or Consequences, New Mexico. Parker and White, along with Parker’s wife, Jennifer, drove in with the tow rig from Columbus, Georgia. Meanwhile, his crew – consisting of Clyde Carlson, Mark Dalquist, Mike DeFazio, Simon and Patrick Foley, Patrick Johnson, Jeremy Lehr, Errol McCollum, Rick Head, Kevin Peckam and Jeff Pope – descended from all over the US to the wild west.

Along the top row is the race crew, while members of the NFB who came to witness Dan’s runs surround him.

The motley crew of gearheads came from many places in Parker’s life – some friends from before the accident, others that joined along the way, many meeting each other for the first time as they began setting up shop on the apron of Spaceport America’s runway. Loring Timing Association’s Tim Kelly provided the timing equipment and helped certify the run along with Guinness’ Official Adjudicator, Michael Empric.

The first passes were made without Parker, with White behind the wheel, as the crew practiced their mechanical routines while sorting out the final ends of the tuneup. Parker’s Corvette had undergone a number of upgrades since its last outing, so they used the time to dial in the details while Parker was making practice runs in his C4 Corvette, which carried a duplicate of the guidance system found in his C6. Once they felt confident that the C6 was putting down the power predictably, Parker was loaded in for a handful of soft N/A passes, lifting at the half- and three-quarter-mile marks, while White and the crew observed how his run looked while battling crosswinds.

On Thursday, Parker began walking up to what would become the record passes. Out the gate, after a soft 187-mph pass that was aborted with high winds, Parker and White posted a 205-mph pass – enough to break the old record with a return pass, but still, Parker was patient. “I had felt a big compression in the middle of the course, and so I had our guys adjust the coil-overs a few clicks,” Parker says, and the crew took the last chance to nut-and-bolt everything before committing to the one-hour turnaround.

The two record runs were flawless, first coming through the traps at 210 mph before backing it up with a 211, the combined average settling to 211.043 mph – securing the Guinness World Record handily. Really, the only hiccup was that the water pump on the coolant cart had malfunctioned during the one-hour turnaround, which led to the crew transferring water into the cooling reservoir by hand with buckets, bottles, and anything else they could. Their persistent teamwork paid off, and while White managed everything involving the car and crew, Parker was none-the-wiser to the bucket brigade outside.

“This project is so much more than just a number,” Parker says. “This is about affecting society’s opinion of the blind, giving blind people hope that we can live the life we want and go after our dream. And to not let society or people’s opinion’s stop you from chasing those dreams, you’ve got to think outside the box.”