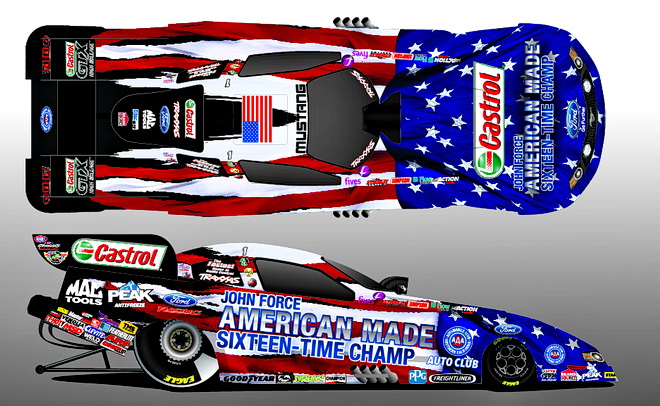 With just two races left in the 2014 NHRA season, defending John Force has one primary focus; do whatever it takes to successfully defend his Mello Yello NHRA Funny Car championship.

He does, however, know that fans have been clamoring to see his 16X celebratory Funny Car paint scheme, which has become a tradition for the winningest driver in NHRA history. Force will unveil and qualify in the 16-time Champion American Made-themed Ford Mustang Funny Car, designed to resemble a battle-weathered American flag.

“I wanted something that really showed who I am. I am American Made and everything about John Force Racing comes back to that idea,” Force said.

“This is a tribute to all my employees who are American Made and work harder than any team out here. I love America and I love NHRA drag racing. This was the perfect look for my 16-time championship Funny Car.”

Force clinched his unprecedented 16th NHRA Mello Yello Funny Car championship at the Toyota NHRA Nationals in spectacular fashion last season by winning the race over daughter Courtney in a photo-finish final round.

“I want to thank the fans and all my sponsors. Doing specialty cars is always tricky, but my sponsors have been great and I know the fans will get a kick out of seeing this red, white and blue hot rod on the track during qualifying in Las Vegas,” Force added.