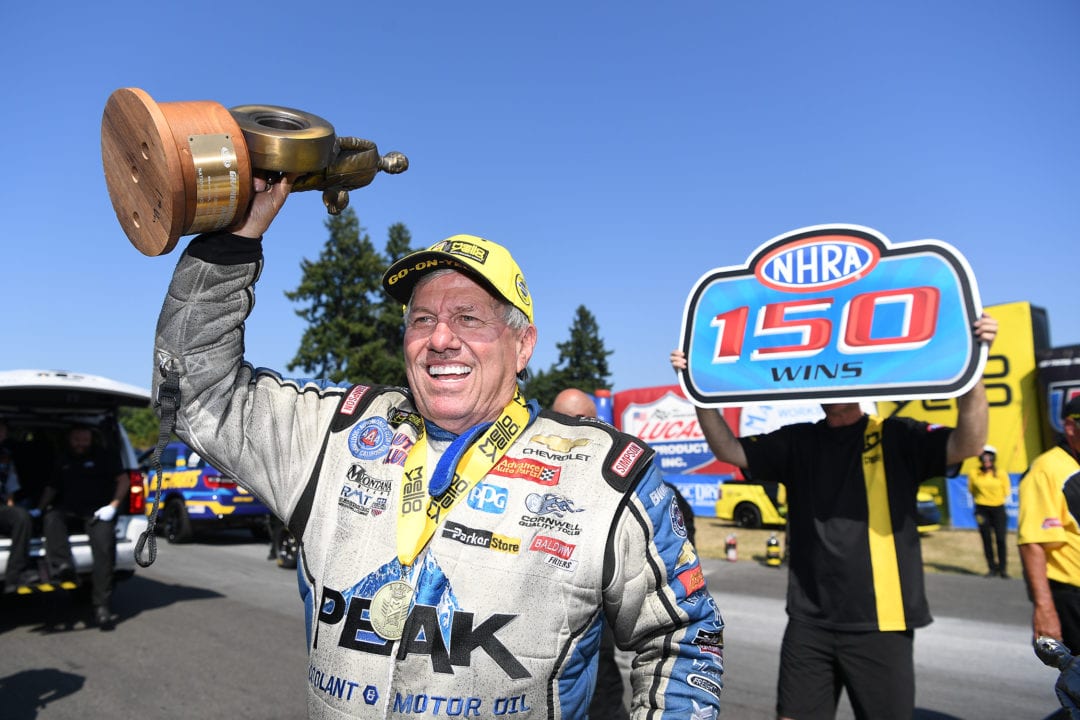 While Force earned his 150th career win, John Force Racing teammate and Top Fuel rookie Austin Prock picked up his first career win as part of a historic day for JFR. Matt Hartford also won in Pro Stock at the 16th of 24 races during the 2019 NHRA Mello Yello Drag Racing Series season. It was the final of three races on the famed NHRA Western Swing.

Force, the 16-time Funny Car world champion and the NHRA’s winningest driver, beat Ron Capps in the final round thanks to his run of 3.971-seconds at 320.58 mph in his PEAK Chevrolet Camaro. Capps ran 4.018 at 309.91 in the final round. It marked Force’s first victory in 25 races dating back to last season and his ninth career win at Pacific Raceways.

“I give credit to a lot of crew chiefs over the years,” Force said. “I got the monkey off my back and it drove me nuts. But it taught me to focus on my car if I want to do (well). I had to get to know my car and sometimes you need a slap in the face. That was the monkey that made me focus. I’ve been living it here the last 4-5 races and we found something real critical. I may not be as young as these kids, but I’m excited. I can calm down now and not live with that thinking that I’ll never get it.” 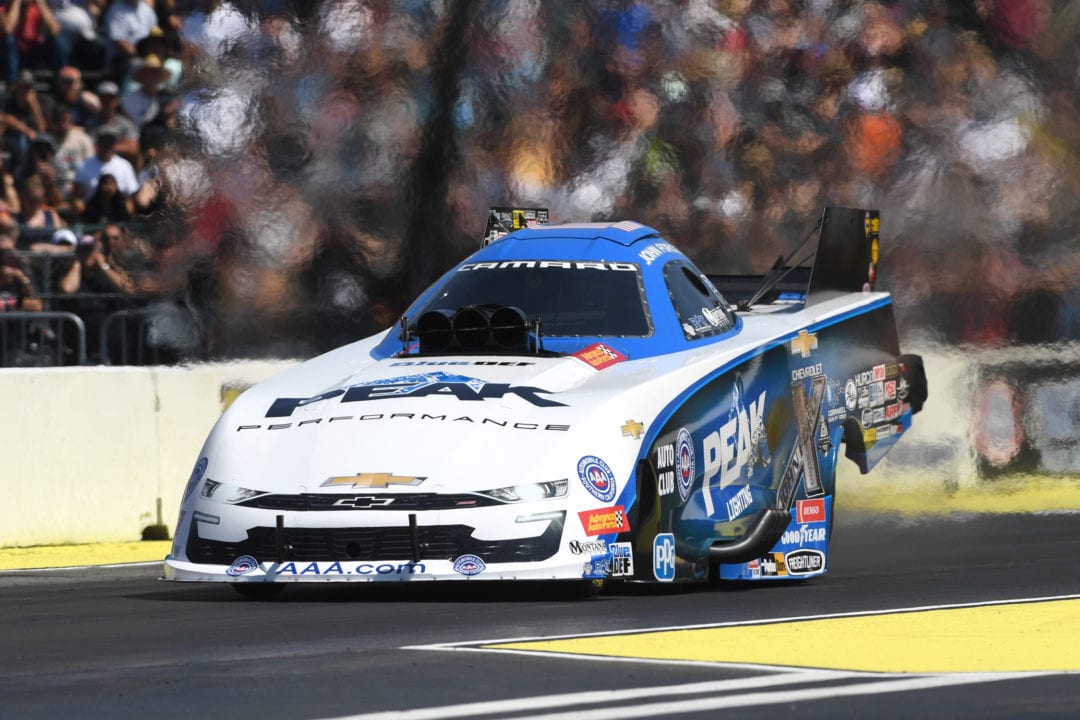 Force beat Jim Campbell, JFR teammate and points leader Robert Hight and Jack Beckman to reach the final round for the 253rd time in his NHRA career. Capps, who is second all-time in Funny Car wins to Force, beat Tim Wilkerson, defending world champ J.R. Todd and Matt Hagan to make his 121st final round. Force, though, prevailed in the 103rd head-to-head matchup between the two longtime rivals on Sunday in the championship round.

“Give me a good race car and I can race,” Force said. “I know Capps wanted to beat me and he was giving it all he had. He’s the real deal, he’s a real great racer, and today luck was just with me and I got the win. Ron was the first one over to congratulate me and that’s the kind of guy he is. But there’s certain tracks I’m really happy at and I’ve always loved Seattle. I’m in the hunt and that’s all I ever wanted to do was to be in the hunt.”

Torrence advanced to his 52nd final round by beating Steve Chrisman, Antron Brown and Shawn Reed. Prock was motivated to try and knock off Torrence, who has eight wins this season, in the finals after watching Force pick up his 150th win the pair before him.

“This is just unbelievable,” Prock said. “I have to thank John Force for giving me this opportunity. I’m still speechless. This is a dream come true. I’ve wanted this ever since I was knee-high. Ever since I could think, I wanted to drive a Top Fuel car. We said when John gets 150, I’m going to get my first one and it all came together perfectly. We put all the pieces of the puzzle together today. I wanted to race (Torrence) in the final round. I wanted to be the guy that stopped him.” 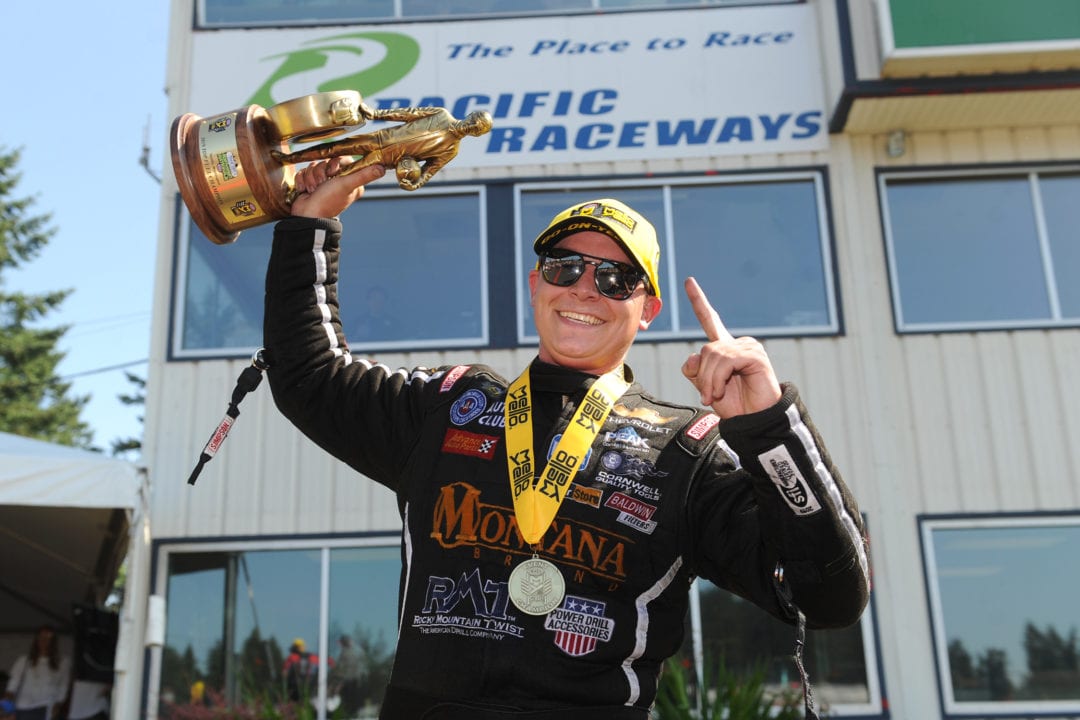 In Pro Stock, Hartford denied Greg Anderson the chance to sweep the Western Swing, going 6.606 at 209.33 in the final round in his Total Seal Camaro to beat Anderson on a holeshot. Anderson went 6.596 at 210.31, but Hartford was quicker off the starting line to pick up the win for the first time this season and second time in his career.

Hartford beat points leader Bo Butner, No. 1 qualifier Jeg Coughlin Jr. and Deric Kramer to reach the final round, while Anderson knocked off Fernando Cuadra Jr., Erica Enders and Alex Laughlin to earn his 156th finals appearance. Anderson had a chance to become the first driver in NHRA history sweep the Western Swing twice, but Hartford delivered an impressive final-round showing in a rematch of the opening race of the Western Swing. Hartford also picked up his first career head-to-head win against the four-time world champ.

“We had a win light against Bo, which really set the momentum for the day,” Hartford said. “Greg Anderson is obviously one of the best that’s ever raced in the class and he’s closing in some monumental records. But he had beaten me 10 out of 10 times and, once again, we went up there knowing we had to go ‘A to B’ and whoever leaves first should win the race. We figured we had a good chance, the driver just had to be on his game.” 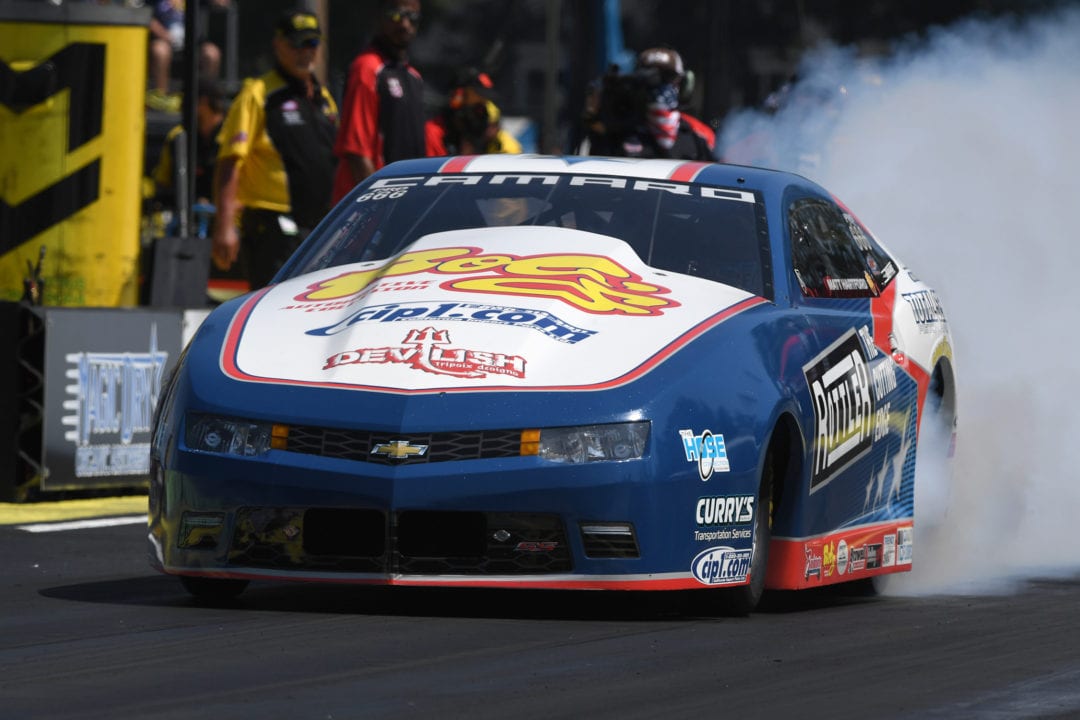 Sunday’s final results from the 32nd annual NHRA Northwest Nationals at Pacific Raceways. The race is the 16th of 24 in the NHRA Mello Yello Drag Racing Series.