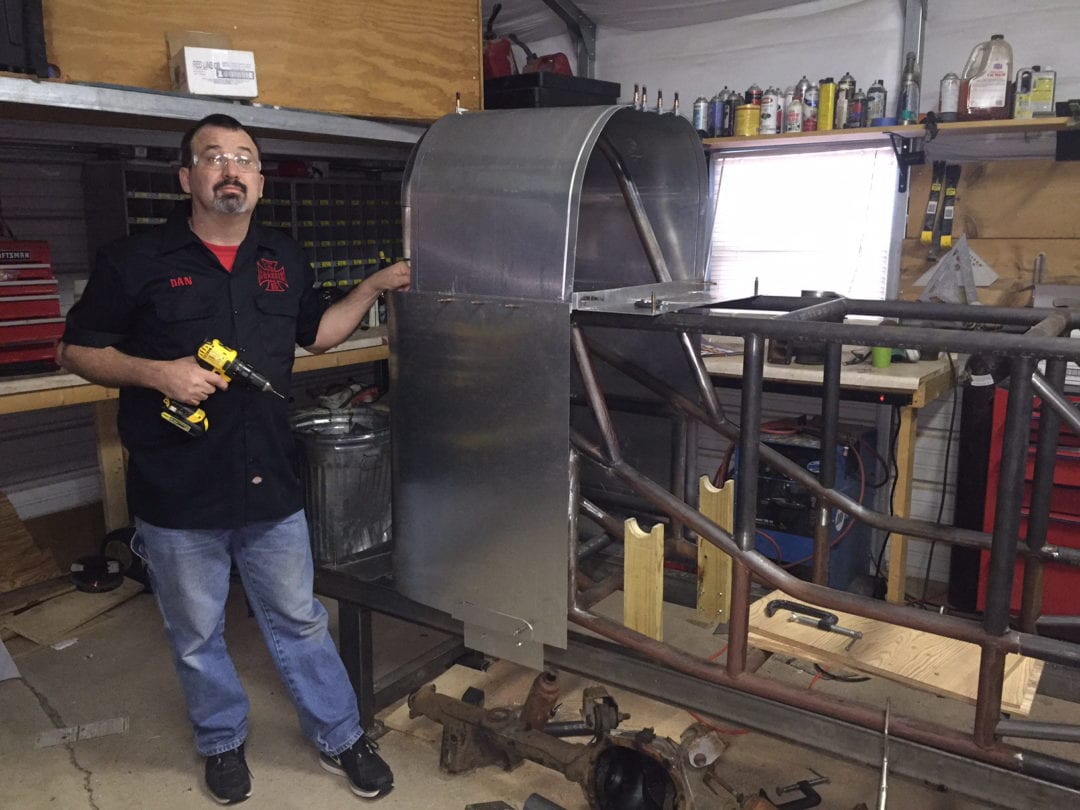 Despite the devastation of losing his sight in a severe drag racing accident five years ago, Dan Parker refuses to give up his love of speed and competition. “I’m not a blind man who wants to go racing,” he declares. “I’m a racer who just happened to go blind.”

Within months of his life-changing crash, the 2005 American Drag Racing League Pro Nitrous World Champion began personally constructing a three-wheeled cycle car powered by a single-cylinder engine that he eventually drove at the famed Bonneville Salt Flats in Utah. 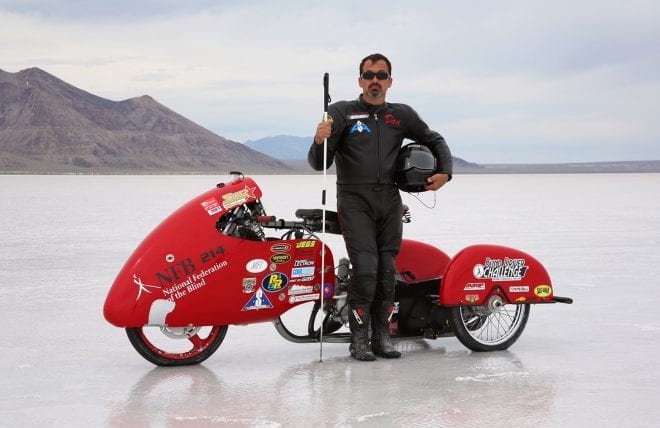 “It was August of 2014 and I set an official speed record for the 50 to 85 cc cycle car—and it has no exemption for blindness—it’s just a true class record at the Salt Flats. My official record is 62.05 miles per hour, which is the average speed after making two one-mile runs in opposite directions,” Parker explains. “But the trike was just a stepping stone because I knew if I ever wanted to run something fast again, I had to first get my foot in the door.”

Now working alone in a plain, single-car garage behind his tidy, suburban Columbus home, the 46 year old is in the midst of constructing a much bigger and faster machine. With plans to compete early in 2018 in the Loring Timing Association’s (LTA) standing-mile event at Limestone, Maine, Parker is building a classic, open-wheeled “lakester” car, destined to be powered by a Fulton Competition-built, big-block Chevy engine.

“The chassis is sort of like a front-engined dragster, but the motor is moved farther forward so that the weight is more centered, and it’ll have an aluminum body that encloses everything, including the motor, with a canopy that comes down over the cockpit,” he says. “I designed and built the car pretty much by myself. I’ve cut, notched and fitted probably 90 percent of the tubes in the car and I’ve tack welded probably 50 percent of them before a couple of guys I know come over and do the final welding on them. And my intention is to shape and attach 100 percent of the body by myself.

“You know, I grew up in racing; I grew up working with my hands, working with metal, building race cars, and going racing. It’s what I know, so I want to keep on doing it. The bottom line is I’m not going to let blindness win. I’m not going to let it take away my passions in life, so I just had to learn how to do things a little bit different way and just keep going forward,” he continues.

“And if I go out there and just run a hundred miles an hour I’m willing to accept that, but I firmly believe that to achieve excellence you have to set high targets. So right now the world’s fastest blind man went 204-plus miles per hour, but he did it with a sighted person riding beside him in a modified production car. I want to become the world’s fastest blind man at 225 miles per hour, in a car I built myself, and with no human assistance beside me.”

Parker will, however, have an onboard guidance system created by Patrick Johnson at MFI Electronics, similar to the one Johnson built for the cycle car that emits a series of beeps in each side of Parker’s helmet that increase in speed and intensity depending on which side the vehicle deviates from the race course center line.

“It’ll work on the same principle, but it’s going to take a lot more expensive and sophisticated unit because it has to be so much more accurate and has to process so much faster to give me feedback and keep me on line at high speed,” Parker says. “Plus, we had a chase vehicle with a remote shut off the last time that of course won’t be possible at 225, but Patrick will have a command center at the trailer where everything will be viewed live through cameras and other data acquisition and he’ll be able to remotely shut the car down if he feels that’s necessary.”

Parker also was recently announced as a semifinalist for the inaugural $25,000 Holman Prize for Blind Ambition offered by LightHouse for the Blind and Visually Impaired in San Francisco. Named for explorer James Holman, who in 1832 became the first blind person to circumnavigate the globe, it is intended to reward legally blind individuals with a penchant for exploration. “There are a lot of good entries, but I can’t help but think James Holman would like my drive to succeed and sense of adventure, so maybe that will help my chances when they announce the award in July,” Parker says.

Even if he wins, though, Parker stresses that building a car and going racing remains an expensive proposition, and his biggest need remains sponsored parts and products to complete the project.

“I realize this isn’t a super-high profile media event, but this is something that can reach the average person who was maybe hurt in a car accident, or someone coming home from the military with a serious injury, or another blind person who might be inspired to step outside their comfort zone and try something new,” he says. “It’s just something so many other people can relate to and I just feel like there’s quite a bit of value there for a company to be associated with what I’m doing. There’s also the opportunity to gain even international exposure, too. So if someone has a speed company that could donate parts, believe me, we have a long list of stuff we need.”

Regardless, Parker is determined to get back on the track and return to the sport he loves. And while he has definite achievements in mind, he intends to measure success just by the attempt to reach them.

“Knowing the LTA is willing to give us the track by ourselves, we’ll have plenty of time and space to do this without putting too much pressure on ourselves. We’ll just do what we can to gradually get up to speed,” Parker says. “I mean, I might not even run 50 miles an hour the very first time, but we’ll just take it a step at a time. It’s like anything else in racing, I’m not going out there to get hurt or feed my ego by trying to set a record right off the bat. I’ve never been that way in racing and I’m not going to be that way now.”