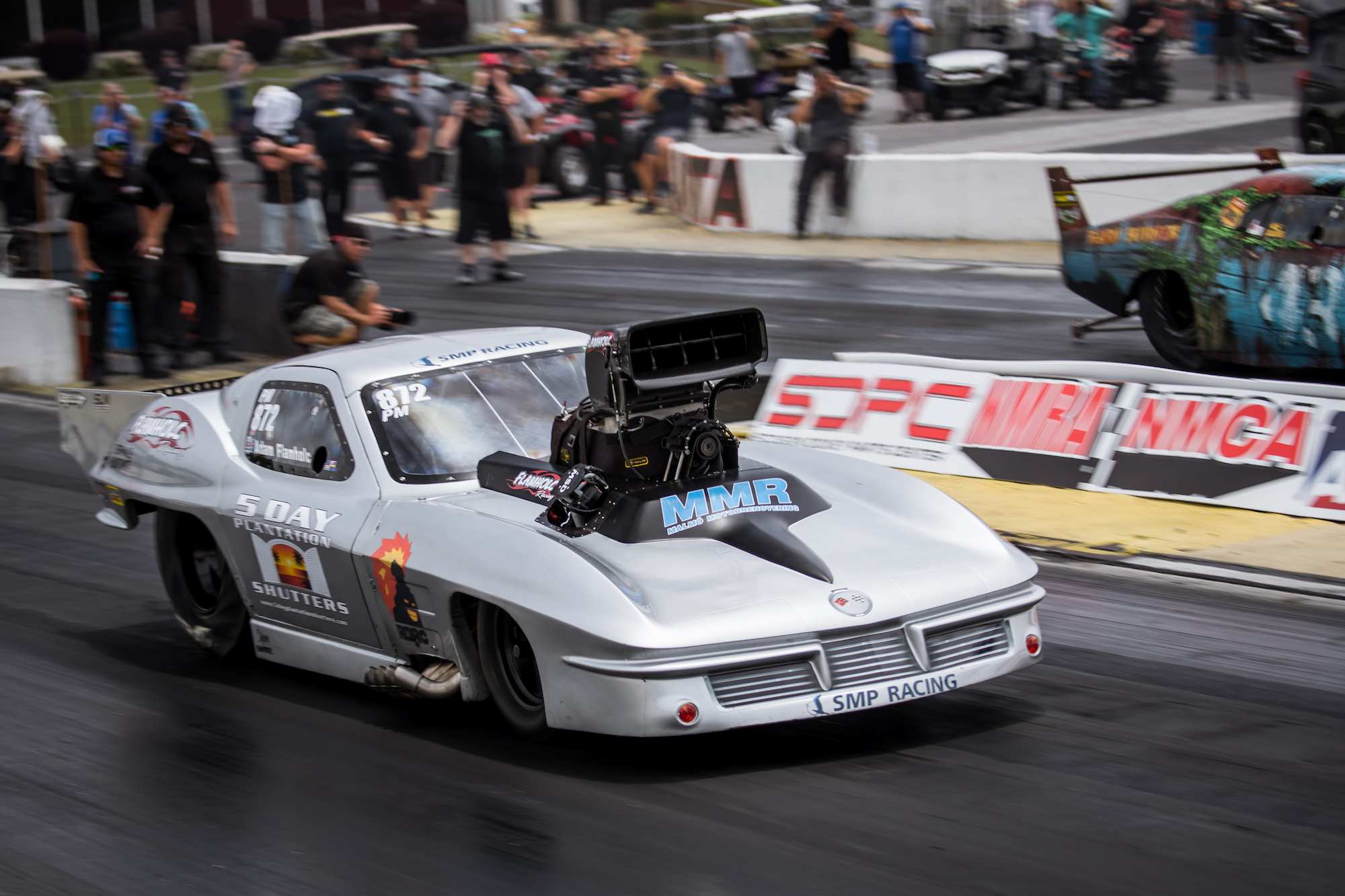 While the Coronavirus pandemic pushed pause on the 2020 NMCA and NMRA season, drivers in both series pushed play at the 12th Annual Scoggin-Dickey Parts Center NMRA/NMCA All-Star Nationals, June 25-28 at Atlanta Dragway.

If they were rusty from the recess, they didn’t show it, as they put down plenty of power while pursuing the coveted Aerospace Components Winner’s Circle in the Peach State.

On the NMCA side, Adam Flamholc flew to a 3.73 in his Corvette to set the pace in VP Racing Lubricants Xtreme Pro Mod, where all but two drivers in the category also posted 3-second passes despite high heat and heavy humidity. The stellar Swedish driver was determined all weekend long, and won with a 3.85 against Craig Sullivan, who was no slouch before being forced to click off at 4.05 in his Daytona.

In Mickey Thompson/VP Racing Madditives Street Outlaw, Alan Felts arrived at a 4.42 in his Mustang to lead qualifying, but Phil Hines was hungry for yet another win in his Mustang, and got it, after a tight 4.50-to-4.51 matchup against Tony Hobson and his Mustang in the final round.

A mighty mix of Mustang Cobra Jets, COPO Camaros, and Challenger Drag Paks duked it out in Holley EFI Factory Super Cars, where Chris Holbrook hot-shoed to a 7.73 in his Mustang Cobra Jet to lead qualifying. But the final round featured Tripp Carter and Chuck Watson and their Mustang Cobra Jets built at Watson Racing. Carter collected the win with a 7.84, while Watson was forced to get out of the throttle. 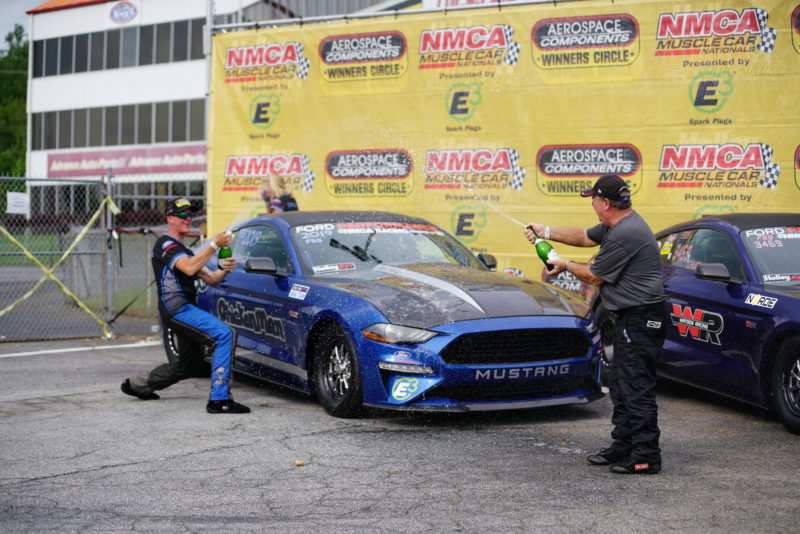 We’ll never tire of the nitrous purges in ARP Nitrous Pro Street, and that includes the plumes from Randy Dolensek’s Mercury Cyclone Spoiler II clone before he cruised to a 4.54 to lead qualifying. Dolensek, who achieved two runner-up finishes in the category last year, showed no signs of stopping on his way to his first win of this year with a 4.56 against Vince Khoury, who turned in a 4.61 in his Firebird.

The engines were singing the most sensational songs in Dart NA 10.5 presented by Diamond Pistons, and Leonard Long’s engine was among them as he secured a 7.85 to set the pace in his Mustang. The Pennsylvanian pushed on, and then put up a 7.91 to take the win over Rich Nye, who recorded an 8.07 in his Mustang.

Chevrolet Performance Stock presented by Scoggin-Dickey Parts Center saw Ronnie Hackelton handle a 10.27 to lead qualifying in his Camaro, and he made it all the way to the final, where Gary Duncan was ready to dish out a 10.48 in his Camaro to take the win over Hackelton and his 10.93. 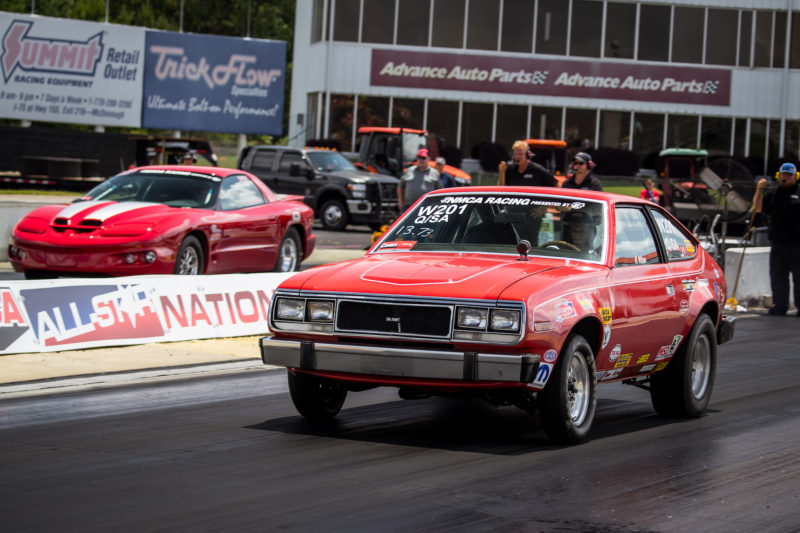 Corky Bumpus stopped the clocks at 11.00 on an 11.00 index in his bad-to-the-bone Barracuda to lead qualifying in Quick Fuel Technology Nostalgia Super Stock, but two-time category champion Kevin Gass grabbed another win after running right on his 9.75 index in his Chevelle when Ron Tiller tripped the red light in his Coronet.

The classic cars of the Detroit Truetrac Nostalgia Muscle Car category continue to charm, and among them is Jacob Weigl’s Malibu. The Kentuckian drove it to an 11.00 on an 11.00 index to lead qualifying, but multi-time category champion Andy Warren and Cindee Hall made it to the final. They were oh-so-close on the tree, but Warren ran a 10.31 on a 10.25 index in his Caprice to take the win over Hall, who gave him a tight race before slightly breaking out with a 12.99 on a 13.00 index in her Falcon. It was Warren’s first trip to the Aerospace Components Winner’s Circle in 2020.

As usual, MagnaFuel Open Comp drivers were decidedly dialed in for the bottom, middle and top end of the track, as they were recording remarkable reaction times and running on, or close to, their dial-ins. One of them was Charlie Atkinson, who saw the tree to the tight tune of .000 in his Mustang to lead qualifying, but the final round saw Dan Caissie and his Mustang and David Rickey and his Camaro. Caissie collected the win when Rickey went red.

Cars took a 30-mile cruise and then made three back-to-back passes down track for TorqStorm Superchargers True Street, where Mark Scordato motored to the overall win with a 9.46 average, while Dan Nusbaum nailed the runner-up finish with a 9.92 average. Alex Corella was the 10-second winner, Ben Bramlett was the 11-second winner, Mike Baker was the 12-second winner, Dylan Derby was the 13-second winner and Kay Ward was the 14-second winner. Allen Smith took the 15-second win.

An attractive feature of all six events on the NMCA tour is the popular Dodge // Mopar HEMI Shootout. At this event, Haden Banks was the overall winner with a 9.91 average, while Pete Mansolillo was the runner-up with a 10.35 average. Richard Stimson took the 10-second win, William Field emerged as the 11-second winner, Jeff Smith landed the 12-second win, Alan Scanlan was the 13-second winner, Joe Giordano was the 14-second winner and Chris Hall rounded things out as the 15-second winner.

The eight quickest drivers in the Dodge//Mopar HEMI Shootout came together for the Arrington Performance HEMI Quick 8 presented by Red Line Oil, and when the dust settled, Wade Atchison defeated William Field with a 10.35 to Field’s 11.33.

The True Street Bracket3, featuring drivers who took part in NMCA TorqStorm Superchargers True Street, NMRA QA1 True Street,  Dodge // Mopar HEMI Shootout and Chevrolet Performance Street Car Challenge, saw Dan Caissie collect the win with a 10.88 on a 10.76 dial in his Mustang against Allen Smith, who stopped the clocks at 15.34 on a 15.20 dial in his C1500.

Encouraged after such an exciting return to racing in the wake of the global pandemic, the NMCA is enthusiastic about its next event, the Nitto Tire NMRA/NMCA Super Bowl presented by HPJ Performance, July 30-Aug. 2 at World Wide Technology Raceway in Madison, Illinois.