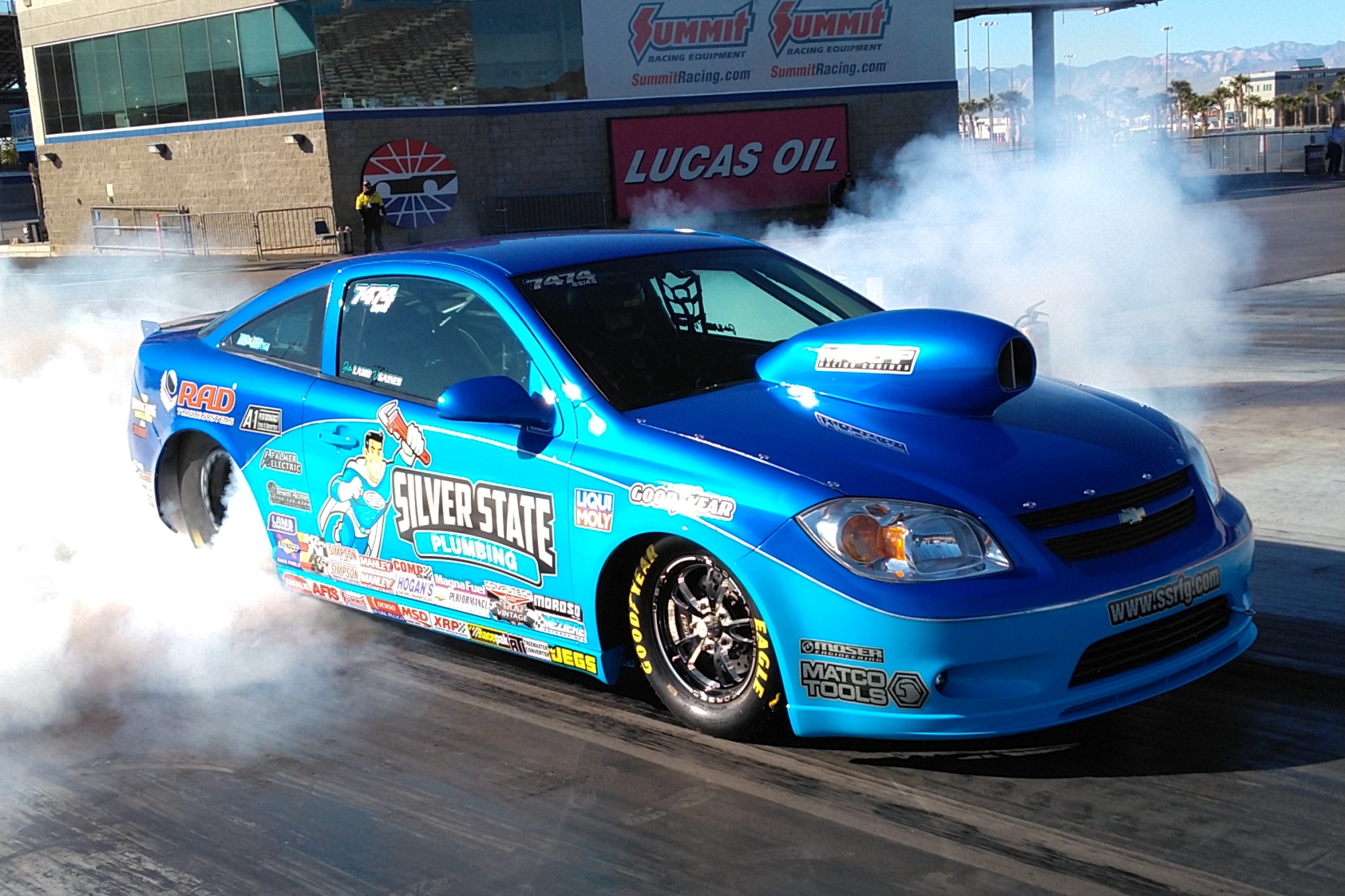 Justin Lamb, a five-time world champion in the NHRA’s sportsman ranks, will start the 2020 season with a new look on his Silver State Plumbing Chevy Cobalt Super Stock entry. The new two-tone blue paint job is one of several changes in the Lamb Motorsports camp going into the new season.

“Shane Thompson and Brian Peterson have been longtime supporters of our racing,” Lamb said of the Silver State Plumbing owners. “This year we decided to get the car painted in the colors of Silver State Plumbing. Jerron Settles painted it, Teran Marsell at Team Acme laid down the graphics, and Logan Staab designed the new look. We’re really happy with it and can’t wait to hit the track.”

Lamb Motorsports also saw a couple new or upgraded marketing partnerships over the winter. RAD Torque Systems, a torque wrench manufacturer, is stepping up as a major partner after joining the team in 2019. Liqui Moly, a German manufacturer of premium motor oil and additives, has joined on as the team’s new oil provider.

“It’s always exciting when we can bring new sponsors on board and further develop our relationships with current partners,” said Lamb, a 26-time NHRA national event winner. “We really try to provide a return for the companies that support us. It’s encouraging to have companies like RAD Torque Systems and Liqui Moly see the value in going racing with us.” 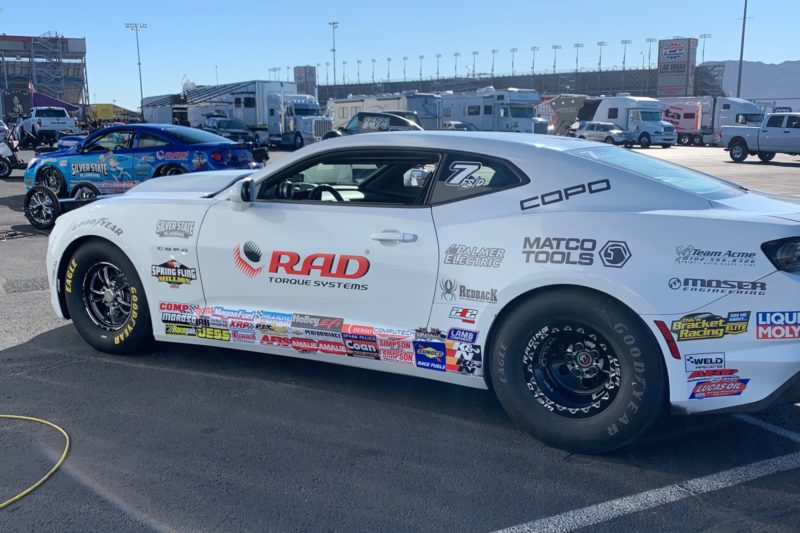 RAD Torque Systems is a leading Canadian manufacturer of pneumatic, battery-powered, and electronic pistol grip torque wrenches. RAD products have proven to be successful all over the world in such industries as oil & gas, petrochemical, mining, aerospace, power generation and manufacturing. RAD Torque Systems joined the Lamb Motorsports team in 2019 and will serve as the primary sponsor on Lamb’s 2019 Chevrolet COPO Camaro in Stock Eliminator competition.

“The gentleman who owns RAD Torque, Dan [Provost], really enjoyed sponsoring us and felt like his return was good,” Lamb said. “He came on board and wanted to do more. He sponsored the dragster last year, which I only drive at more local and bracket races, and he wanted to sponsor the cars I drive on more national levels, so he stepped up and is now the primary sponsor on the COPO.”

Liqui Moly is Germany’s most popular brand of motor oil. The company produces high-quality motor and gear oils, fuel and oil additives, care products, chemical problem-solvers and service products. Liqui Moly is new to NHRA drag racing, but they are heavily involved in a wide range of other motorsports, including Formula 1, the IMSA WeatherTech SportsCar Championship and MotoGP.

“The products are super high-quality,” Lamb said. “We actually sent the oil and fluids to our engine builders and transmission builders to let them test it and see what they think. Everybody was over-the-top impressed, so we’re excited.”

Lamb’s teammate to start the season is Ryan Mangus, Lamb’s longtime friend and former Jr. Dragster competitor. Mangus has driven for Lamb Motorsports in the past, and he will take to the seat of the MadCap Racing Engines-powered, Redback Boots-backed ’19 Race Tech dragster in Super Comp at NHRA nationals and divisionals. The duo will be joined by longtime Lamb Motorsports driver Kyle Seipel once he recovers from his cancer battle.

“Ryan is going to drive the dragster at least to start the year until Kyle is ready to come back,” Lamb said. “At that point, Kyle will either race the dragster or our other COPO, the Super Stock COPO owned by Larry Stone and sponsored by Stone Chevy/GMC/Buick and Palmer Electric. Kyle drive one and Ryan will drive the other. We’ll assess that when Kyle is ready to race, but the bottom line is Ryan will always have a car to race with us.”

According to Lamb, Seipel is eyeing up a potential return to the seat in the summer. In the meantime, Seipel is working with co-promoter Peter Biondo to promote the Spring Fling line of big-money bracket races.

“His cancer is definitely getting better,” Lamb said. “It’s way better than they anticipated as far as how the cancer is reacting to the chemo. He’s doing great, he’s super positive, but he’s still thinking June or July before he wants to try racing again. He wants to get his immune system back up and mentally get prepared to drive again.” 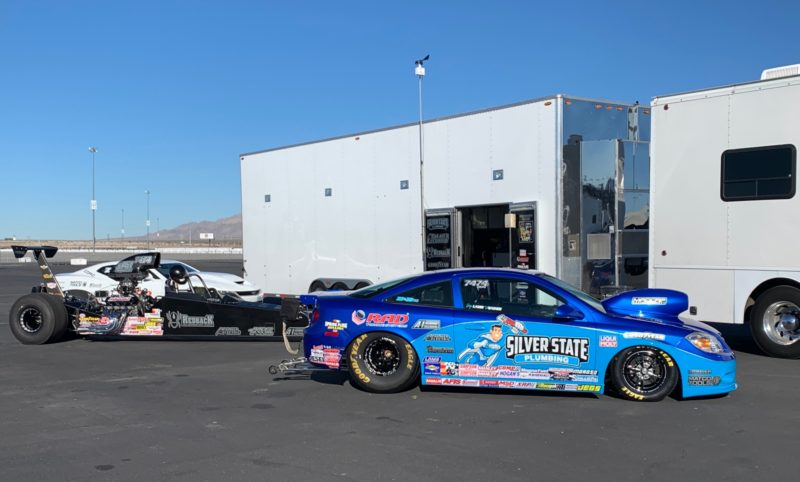 As for Lamb’s plans for the 2020 season, he’s starting off with a conservative approach. He’d like to get back to the championship form that helped him win three NHRA world championships in two seasons (2017-2018). However, he also wants to maintain the family-friendly nature of his racing program, as his wife, Jeanine, and their two children, son Jayce (6), and daughter Jovi (2), typically join Justin and his parents, Chris and Carole, at the races.

“I’m going to see how the first couple races go,” Lamb said. “Ultimately, I’m just trying to improve my focus, and we’ve made some improvements to the cars over the winter to hopefully make them a little more reliable and consistent. A lot of it is just me and my focus. Last year, I put a lot of priority on spending time with my family and making sure they enjoyed coming racing with me. I need to find a happy medium between maintaining the focus but also making it enjoyable for the family to come with me. At the end of the day, we do this as a family.”

Lamb, Mangus and the Lamb Motorsports team will kick off their 2020 season at the 60th annual NHRA Winternationals, Feb. 6-9 at Auto Club Raceway in Pomona, Calif.