At the end of the Professional Drag Racers Association’s (PDRA) first season in 2014, Todd “King Tut” Tutterow claimed the Pro Boost season championship. At the recent conclusion of the PDRA’s ninth season, Tutterow was crowned the world champion in WS Construction Pro Boost presented by P2 Contracting and Ty-Drive yet again.

Tutterow, driver and tuner of the screw-blown P2 Contracting ’20 Camaro, started the season with back-to-back wins at the East Coast Nationals presented by FuelTech at GALOT Motorsports Park and the Vortech Doorslammer Derby presented by Stroud Safety at Beech Bend Raceway Park. Runner-up finishes at two of the last races of the year, plus a rainout at ProFab DragWars at GALOT, put Tutterow in the position to clinch the 2022 world championship with a first-round win at the Proline Racing Brian Olson Memorial World Finals presented by ProCharger at Virginia Motorsports Park.

“We started out up front, which makes it a little easier,” Tutterow said. “Melanie [Salemi] was right there on our heels the whole time. She kept gaining and gaining. We lost GALOT [DragWars]. That didn’t really seal the deal, but it made it a lot easier. Then we had a very lucky run first round. My car was missing, running on about six cylinders, and [Don Tolley’s] car shut off. It was just meant to be.”

Tutterow was one of four drivers left in competition at the World Finals when persistent rain and inclement weather forced the cancellation of final eliminations.

Tutterow was the only repeat winner in Pro Boost this season. The other winners were Johnny Camp, Kurt Steding [Tutterow’s P2 Racing teammate], Salemi, and first-time winner Preston Tanner.

“It’s the best group of racers here,” Tutterow said of Pro Boost. “All the best cars are here. Pro Boost is very, very competitive. We had a few come in and out. Some guys from Canada come down and made it really interesting.

“PDRA gives a very competitive deal,” Tutterow added. “They’ve changed the rules around and everyone is running about the same. Everybody has their own opinions on all that. But it’s all really, really good, close racing. It’s an honor running over here.” 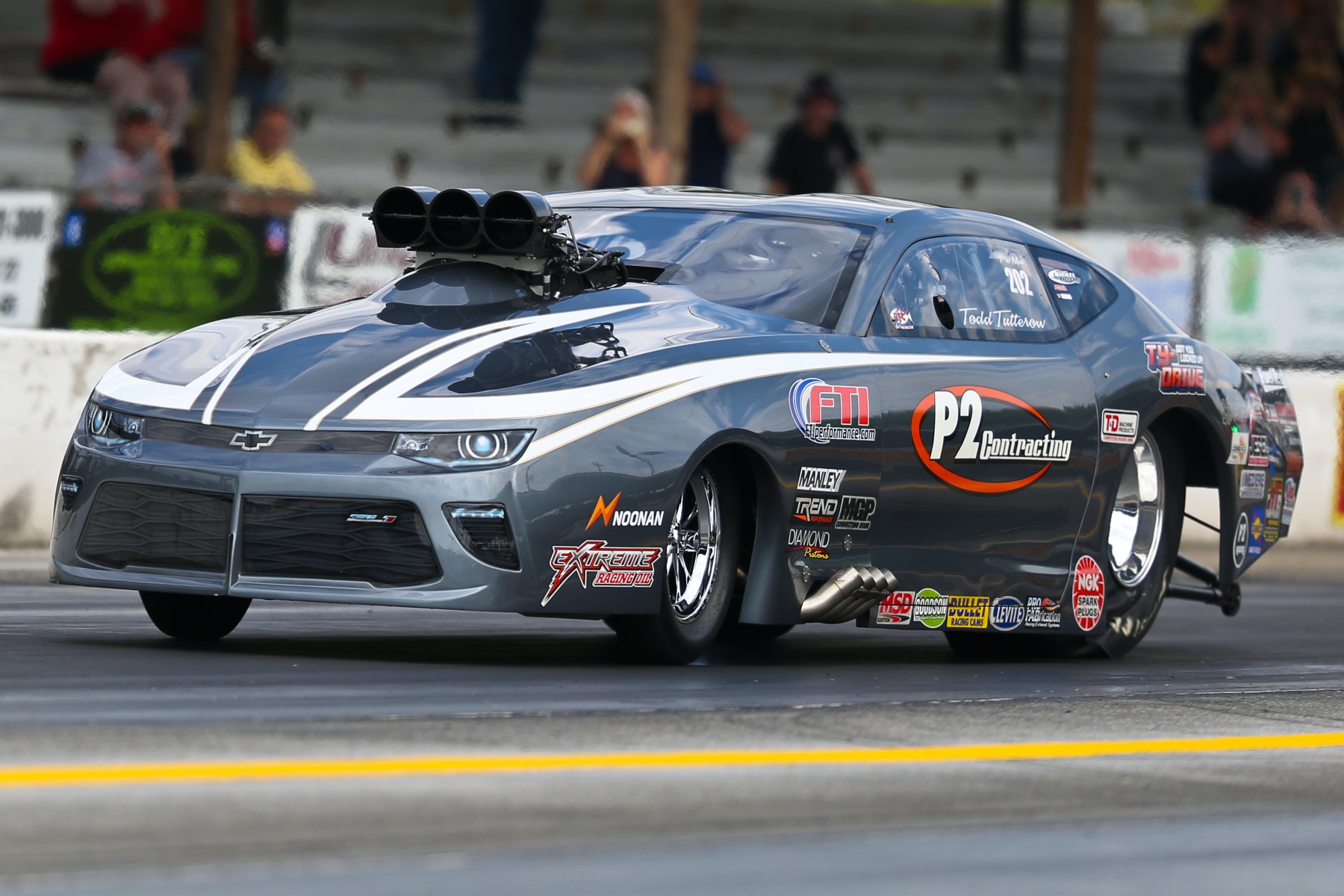 As a driver, Tutterow doesn’t plan to defend his championship. As a tuner, though, he’s committed to helping Steding and the P2 Contracting team win back-to-back titles. Following the winter series races in Florida, Tutterow has decided to step back from driving to focus on tuning Steding’s P2 Racing Camaro and helping other Wyo Motorsports and Ty-Drive customers.

“I’m going to sit out,” said Tutterow, who is in the process of selling his car. “I might get another car and run later on, but I’m going to concentrate on Kurt’s stuff all 100 percent. And helping our customers with their stuff too. I’m kind of backing off from driving for a while. I have a lot going on and need to concentrate on other things.”

Tutterow was sure to credit his team and partners for their role in his success this season.

“I have to thank Kurt Steding, P2 Contracting, FTI Performance, Ty-Drive, NGK Spark Plugs, and just everybody in general,” Tutterow said. “The fans too. It’s been an honor to do this.”

The Pro Boost championship runner-up, Melanie Salemi, set the current E.T. record at the season opener, the first of four races where she qualified No. 1 in the roots-blown Slice-and-Ice ’19 Camaro. A win at the Drag 965 Summer Shootout presented by Classic Graphix at VMP and a runner-up at the DeCerbo Construction American Doorslammer Challenge presented by Callies at Summit Motorsports Park helped her secure the No. 2 spot.

The PDRA will celebrate Tutterow and the other 2022 world champions at the annual PDRA Awards Banquet on Friday, Dec. 9 during the Performance Racing Industry (PRI) Show in Indianapolis.