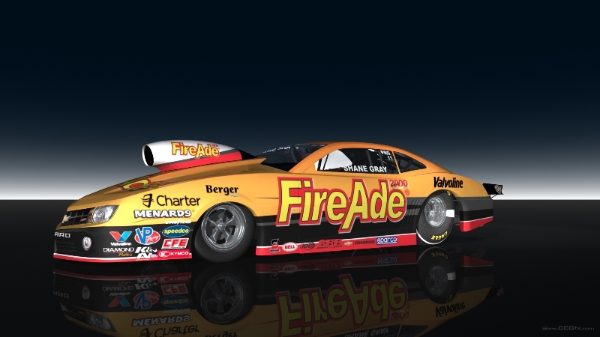 Gray Motorsports and FireAde 2000, the leading extinguisher for households and boating, announced May 8 that they have entered a multi-race agreement to include primary sponsorship of the NHRA Pro Stock Chevrolet Camaro driven by Shane Gray at select events during the 2014 season of NHRA’s Mello Yello Drag Racing Series.

FireAde 2000 is the newest chemistry in firefighting foam agent technology and the most complete and user-friendly firefighting agent. Using a proprietary blend of non-toxic chemicals, FireAde 2000 is an environmentally safe product tested by more worldwide government environmental agencies than any other product currently manufactured. The product, manufactured in Fayetteville, Ga., is non-toxic, non-corrosive and biodegradable. FireAde 2000 is used in 42 countries and by over 3,500 fire departments across the United States and in the U.S. Military.

Gray will debut the FireAde Chevrolet Camaro at the upcoming Summit Racing Equipment NHRA Southern Nationals at Atlanta Dragway, May 16-18.

“This is a real neat deal for us to partner with FireAde, especially right there in Atlanta where their headquarters are based,” said Gray, a three-time NHRA national event winner. “They’ve got a great product that is something we should all have in our pit areas and on our tow vehicles out there at the races, and keeping it on the rig and at the shop just gives us peace of mind.”

In addition to flying FireAde colors on the racetrack in Atlanta and Topeka, Gray and his Jerry Haas-built FireAde Chevrolet Camaro will be at Menards, 6401 SW 17th St., Topeka, Kan. 66604, on Thursday, May 22, from 4:30-6:30 pm. Gray will meet fans and sign autographs, and the public will have the opportunity to get up close and personal with his 1300+ horsepower racecar.

“That should be a lot of fun,” said Gray. “Fans can come on by and meet us, and they can knock something important off their to-do list by stocking up on FireAde right there at Menards.”

Menards will have 16oz cans of FireAde 2000 available for purchase.

“We are very excited to partner with Gray Motorsports and take FireAde into Menards stores with a retail promotion,” said Ron Thames, President of FireAde. “This is a great opportunity for all, and we are looking forward to working together.”