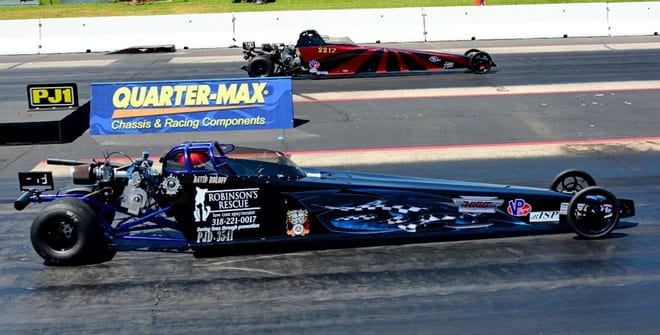 Only Pro Jr. Dragster driver David Roloff (above) managed to step up and take over the top spot in the fourth and final round of qualifying for the inaugural Professional Drag Racers Association (PDRA) Cajun Nationals. On a hot, challenging eighth mile Saturday at Thunder Road Raceway Park, near Shreveport, each of the provisional top qualifiers after Friday’s three sessions held on to their number-one status in the PDRA’s four pro classes and the remaining three sportsman classes.

With Huddleston Performance Pro Jr. Dragster drivers qualifying based on their ability to match the 7.90 class index, Roloff posted a perfect 7.900 pass at 82.91 mph to oust Nicholas Cannon from the top spot, who ran 7.901 straight off the trailer in Friday’s opening salvo. Making Roloff’s effort that much more impressive, the Willowbrook, IL, native came from outside the 16-car field in 17th place as the final qualifying session began. Significantly, no one else in any class managed to break into the race-day fields if they were not already qualified after Friday’s opportunities.

“I just want to thank my family for letting me do this and especially my dad for the tune up,” Roloff said. “I also want to thank my sponsors and everyone who came out to watch the PDRA here this weekend. I really appreciate it.”

Brandon Snider of Atmore, AL, put his screw-blown ’69 Camaro on the pole in NAS Racing Pro Extreme with a career-best pass of 3.54 seconds at 214.96 mph. He will face number-16 starter Danny Lowry in his brand-new, twin-turbocharged ’67 Mustang once eliminations begin at 4:30 p.m. The quickest Pro Extreme pass in Saturday’s lone qualifying session was a 3.61 at 216.31 by number-four starter Jason Scruggs. 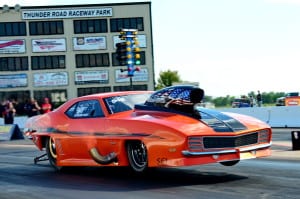 With the only 200-mph pass of the weekend so far in Switzer Dynamics Pro Nitrous, Jay Cox seized the top spot on Friday night with a 3.73-seconds run at 200.68 mph in his ’69 Camaro. Back-to-back defending NHRA Pro Mod champion Rickie Smith starts second, with Tommy Franklin third.

Stevie Jackson in another ’69 Camaro had the quickest Pro Nitrous car in Saturday’s qualifying round, going 3.823 at 196.99 to also become the only one to advance as he leapfrogged Chris Rini by two thousandths to take over 10th place.

In Precision Turbo Pro Boost, Gerry Capano earned his first number-one start with a career-best 3.86 at 193.68 mph in his Greenville, DE-based ’63 Corvette. Jeremy Ray of Lugoff, SC, was the lone driver to improve his starting position on Saturday, jumping from 12th to the top half of the field in eighth place with a 3.925 run at 187.44 in his brand-new 2015 Corvette.

Drag 965 Pro Extreme Motorcycle also saw just one rider improve on Saturday as Canada’s Terry Schweigert rode his nitrous-boosted 2013 Suzuki to a 4.11-seconds pass at 169.87 that advanced him from sixth to third on the ladder. For the third-straight race defending class champion Eric McKinney will start from the number-one spot after posting 4.05 at 176.12 on Friday night. The Hamersville, OH, rider will also be going after his third-straight win this year, beginning with a first-round match against Burke Foster. 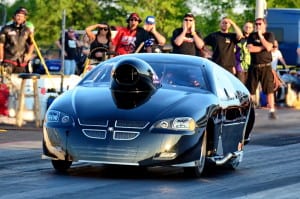 Friday night’s 3.97 pass at 188.96 mph gave Tricia Musi her second-straight MagnaFuel Top Sportsman pole and put her up against number-four starter Johnny Pilcher in a special Chassis Engineering Fast Four race for the top qualifiers at each PDRA event. She lost to a 3.97 by Pilcher, however, while Ronnie Davis beat Aaron Glaser in the other pairing. Davis opted out of the final, though, in favor of saving his engine for eliminations, handing the Fast Four win and $500 check to Pilcher. With only 13 entries for the 16-car Top Sportsman field, Musi will have a bye run in round one, while a bye in round two will go to the winner between second-place qualifier Davis and Cheyenne Stanley.

After 22 drivers made qualifying attempts in four rounds, the straight-off-the trailer 3.85 at 190.32 by Wade Pennington of Ada, OK, held up for the number-one position in Dart Top Dragster. Kyle Dvorak, last year’s PDRA sportsman rookie of the year, placed second with a 4.00 effort at 177.58, with Louisiana’s own Michael Kile third at 4.01 seconds and 184.22 mph.

Joining Roloff as a number-one starter in the Jr. Dragster ranks was Mia Schultz in Huddleston Performance Top Jr. Dragster, which qualifies based on reaction times. Schultz held on from the first session after posting a .003 start.