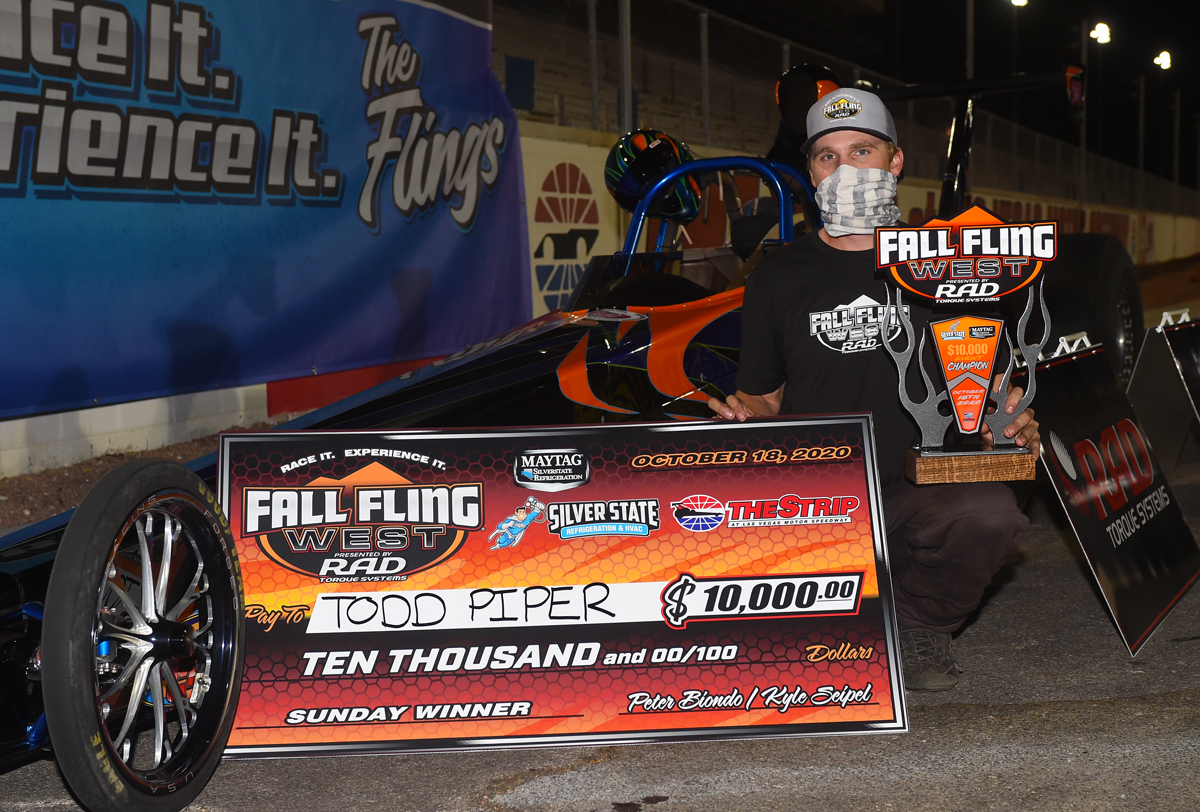 The final day of the Fall Fling West presented by RAD Torque Systems featured the Silver State Refrigeration Sunday $10K.  Prior to Sunday eliminations, the Fling team had a couple of novelty races.

First on the track was the Fall Fling Reaction Time Challenge.  The R/T Challenge gave twenty-five randomly selected racers a shot at $100 if they could post a .00X reaction time.  A perfect .000 light would earn them $1,000!  Racers that hit two .000 lights in a row would earn a cool $10,000 bonus.  Although no one posted a perfect light, three lucky racers earned $100 each.

Next up was Grudge Race #5 between race promoters Peter Biondo and Kyle Seipel.  Each picked a race car from the field to continue their grudge match series.  Going into the race, Seipel held a 4-0 lead over Biondo.  In one of the most entertaining matchups of the event, Seipel melted the tires off his borrowed Econoline, mid-engine, pickup.  After a couple of huge dry hops, he and Biondo pulled to the line for a hit at the tree.

On the practice hit, Seipel posted a -.039 reaction while Biondo was -.035 red.  Both stopped at the 330’ marker, backed up to the starting line and made adjustments prior to the actual race.  As both staged up, Seipel left first posting a .010 light to Peter’s .033.  Pete caught Kyle down track, ripped it a few times to take .025 at the stripe to go under by .035.  Kyle remained undefeated against his good friend when he posted a safe .01 over 6.97.

With the specialty races completed it was time for the Silver State Refrigeration Sunday $10K.  Sean Shaffer, last night’s Panella Race Engines $50K winner, had a bounty on his head as BTE offered a converter to the racer who could take him out on Sunday.

As racers made their way through eliminations, the ladder round found nine competitors still in contention for the Silver State $10K.  Of the nine racers, Sugar Shane Carr was still alive in both of his Silver State Refrigeration dragsters.  Joining Carr in round six were the dragsters of Jake Jones, and Todd Piper along with the doorcars of Gary Mignacca, Ken Sweo, DJ Houmard, Larry McLanahan, and Gary Wargnier.

Larry McLanahan, the GearWrench Pro Class winner, earned the bye in round six after defeating Mark Kidd in the Pro final.  Carr dropped one of his entries to Wargnier to open the round while Jake Jones took out a late leaving Mignacca.  Piper used a .021 light paired with a dead four lap (4.664) to stop Sweo who was a hundred better at the tree but took .023 stripe to go .009 under his 5.97 dial-in.  Sugar returned in his second entry where he defeated Houmard with a .024-pack which locked out DJ who left with a .025 light.

Round seven opened with Sugar getting packaged up by Piper who threw down seven total to advance.  GearWrench Pro winner McLanahan turned it .007 red to advance Wargnier and his Chevelle while Jake Jones earned a bye to the semifinals.

Piper’s .002 light in round seven earned him the bye in the semifinals sending him to the Silver State $10K final round.  Jake Jones and Gary Wargnier squared off in the other semifinal pairing to see who would join Piper in the finals.  Wargnier took a huge lead off the line when his .004 light put him in control of the race after Jones missed the tree with a .059 light.  At the stripe, Wargnier posted a 5.446 on his 5.45 dial but survived when Jones followed him through to go .007 under his 4.65 dial.

This set up the classic doorcar versus dragster final with Piper in the dragster and Wargnier in his ’67 Chevelle.  After a near even start, Piper rolled up on the doorcar and took the win by just .001 of a second!  Piper’s .015 to .019 lead at the start gave him just enough room to sneak by on the top end when his one above 4.650 (4.64 dial) outpaced Wargnier’s dead seven lap (5.437).  The win earned Piper the $10,000 check to wrap up his weekend in style.

Once again Peter and Kyle added a 32-Car $5,000 Shootout to the program for racers that were eliminated in the early rounds of the Silver State $10K.  Going into round three eight racers remained in contention for the final payday of the event.  There we saw David Pracht over Greg Hicks, Jiovanni Collechi over Logan Warr, Shelby Williams over Mark Kidd, and Marko Perivolaris stop Funny Car Chris Northup.

In the semifinal round, Williams and Perivolaris paired up in a great matchup.  After one “thou” separated them at the tree, Williams posted a dead on one 6.791 in her Nova to stop Marko’s dead on six 4.946 pass in his Camaro roadster.  The other semifinal matchup was even closer as Pracht and Collechi left within two “thou” at the start.  Pracht’s Vega was dead on seven (5.727) to turn back Collechi’s dead on six (5.406) effort by just one thousandth.

The all doorcar final saw Williams grab a huge .004 to .044 lead off the line.  At the finish line Williams, daughter of Steve Williams from K&N Filters, posted a one over 6.789 to seal the $5K Shootout victory as Pracht was also .019 over his 5.70 dial in the loss.

That concludes the 2020 Fall Fling West presented by RAD Torque Systems at the Strip at Las Vegas Motor Speedway.  Special thanks go out to all of the sponsors, racers, and crew that helped make the event such a success.  For a recap of the event, visit www.DragRacer.TV to watch the live feed from the weekend.  The live feed was courtesy of Advanced Product Design.

Visit www.BracketRaces.com for results, news, and updates from the Fling team.