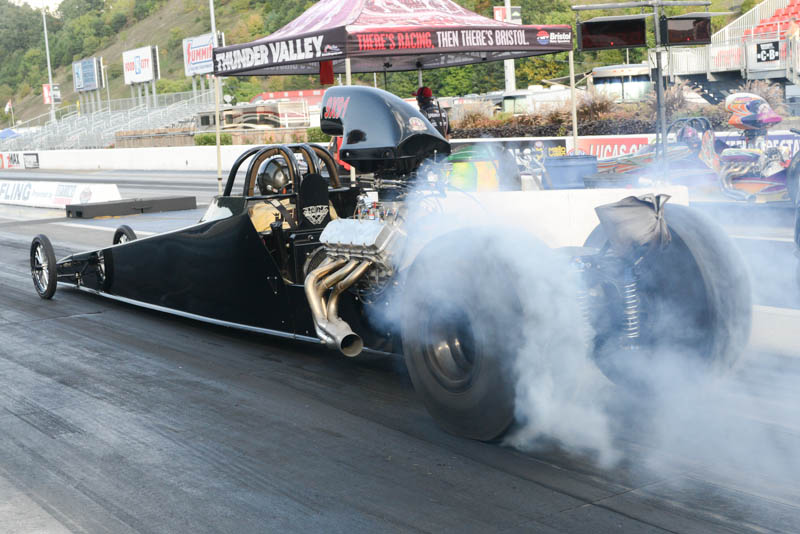 Bright sunshine and hot temperatures greeted a long line of racers waiting to get in Bristol Dragway for Day 1 of the 10th anniversary of the Fling brand of bracket races. The largest paying and most exciting of the Fling brand, the Sparco Fall Fling 500K presented by Optima Batteries will award one winning racer a guaranteed $500,000 in Friday’s ATI main event. Three separate side races will be held FST Wednesday, Hansen Thursday and JEGS Saturday.

Schedule for today as has been the tradition for Day 1 at each of the Fling races included a Test & Tune session along with the American Race Cars/Race Tech Dragster Shootout with a limited field of 32 racers vying for a spot in the final round. Both finalists receive a new dragster with winner having first choice.

Once down to the quarterfinals, each were paired on a ladder according to their Reaction Times with the pairings re-laddered each round according to Fling rules. In the quarters, the remaining door car of Axford was defeated by Lynch despite Axford’s perfect Reaction Time. Next up was good friends DiMino and Markoglu with Markoglu moving into the semis. Denny and Maddox battled next with Maddox putting together a 0.013 package to move on. Last up was Woodring and Sons with Woodring joining the remaining racers in the semifinals.

Semifinal round and Markoglu and Woodring battles first with Markoglu turning on the red-light by -0.006 to advance Woodring. Lynch and Maddox then faced off with Maddox’s 0.009 package turning away Lynch.

For the final, Woodring used a dead-on the dial with a “0” and an 0.011 Reaction Time to turn away Maddox who had a better Reaction Time but was 0.015 off his dial. As such Woodring chose the Race Tech dragster and Maddox left with the American.

With that run, Day 1 of the Sparco Fall Fling presented by Optima Batteries. Is in the books. The action ramps up as Wednesday starts the official opening race of the Fall Fling with $30,000 up for the winner on FST Wednesday.