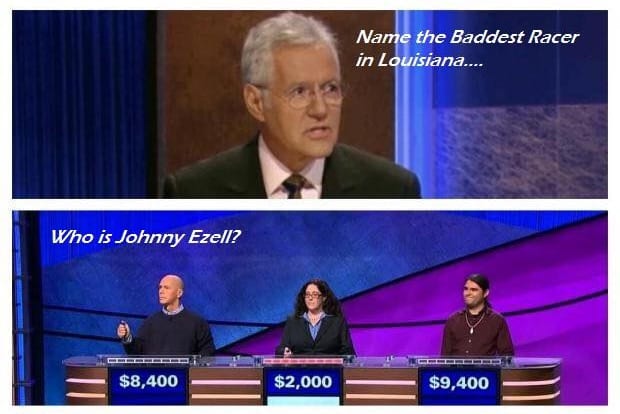 Britt Cummings doesn’t mind stirring the pot a little bit and, after not racing the final half of last year, he didn’t waste any time starting things in 2018.

In what has become an entertaining back-and-forth on social media, Cummings called out and challenged Million Dollar Drag Race winner Johnny Ezell to a race. Since the initial call-out on Facebook a few weeks ago, the two have traded barbs, memes, videos and everything in between, and each driver’s fans have flocked to the conversation, adding their own amusing flair to the rivalry.

Now, Cummings and Ezell are set to duel in a best-of-five bracket race for $5,000, with the first two rounds taking place at this weekend’s Southern Big Buck Nationals at No Problem Raceway in Belle Rose, La., a race promoted by Ezell.

“I wanted to call out who everybody thinks is the best and measure myself, see where I’m at,” Cummings said.

Sensing it was good for bracket racing, the quiet Ezell decided to match Cummings wit for wit on social media, happily obliging with Cummings. Usually reluctant to do interviews, Ezell said it simply made sense to try and make the race with Cummings as big as possible.

“He made a video and next thing you know, I’ve got 10 phone calls from buddies about him calling me out,” Ezell said. “I figured I would have some fun with it. I didn’t realize how many people were interested. I’ve had hundreds of message of people rooting you on. It’s been fun.”

Ultimately, it’s the rekindling of a Cummings-Ezell rivalry that dates back nearly three decades when Cummings raced against Ezell’s grandfather, as well as his mother and father. Cummings and eventually his brother, Slade, kept the rivalry going with the Ezell family, with the two standout bracket racing families often facing off in big-money match-ups over the years. Without question there is mutual respect between Cummings and now Johnny Ezell, but that has only increased the passion each has to win this matchup.

“There’s definitely the backstory to it and I’ve watched Johnny come up, winning everything,” Cummings said. “This is a way for me to see where I’m at, rekindle the rivalry and make bracket racing great again. The way I see it, any good controversy is good controversy.”

After the first two rounds this weekend, the duel will finish at Cummings’ Dream Team Challenge race at Memphis International Raceway on Memorial Day weekend.

Ezell said the build-up has led to even more interest in his well-attended race this weekend, with calls, e-mails and messages coming in asking specifically about when Ezell and Cummings will face off.

With Ezell’s track record and success over the past few years, including a number of wins at big-money races, getting called out is nothing new. But to see it spread like wildfire on social media in so many different forms, it’s certainly piqued Ezell’s interest. It brings extra pressure, too, but that’s nothing new for Ezell, who has already had significant success in 2018, winning a number of big-money bracket races since the Million Dollar Drag Race.

“It brings back old memories, that’s for sure,” Ezell said. “I’ve been in a few call-outs the last few years, but nothing like this. It makes it fun to put it all on the line. I’ve always been good under pressure my whole life. That’s when I always shine. If I know people are watching and interested, it seems like I do better.”

Cummings likened it all to a classic wrestling build-up, only instead of a television audience, the two bracket racers have used social media to let their feelings be known. It has led to plenty of creativity, with Ezell calling out “a lack of big checks” to a bandaged Cummings in memes, with Cummings responding with time sheet losses and even Jeopardy in his memes.

The buzz has been noticeable and Cummings also doesn’t mind if he’s being portrayed as the bad guy – or a heel if we’re sticking with the wrestling theme.

Taking a nod from what he’s seen on Street Outlaws, he simply wants to get people talking about bracket racing.

“We’ve learned a lot from watching them and seeing what goes on,” Cummings said. “Do we need more of that? Yes and keep the racing real. People have picked a side in this and that’s great. It’s really got some people’s ass hurt about it. But I like that bracket racing is getting some attention. I think all racing needs more of it.”

As for the final outcome, both feel confident about their chances. Ezell, who has been referenced as “Johnny Bracket Racer” during the build-up, is the favorite based on his recent run of considerable success, but Cummings is fine with that.

He knows he will have to be nearly perfect on the starting line, but the underdog role seems to suit Cummings perfectly.

“According to the numbers and the public, I have zero chance,” Cummings said. “That just motivates me more. It will bring out the best in me. I haven’t been this motivated to race in a long time, period.”

That’s just fine with Ezell, who has been almost flawless when it comes to big stakes in recent years. It’s a reassurance, along with the motivation created over the past month, he believes will play to his favor.

“With the money on the line and the pressure, he will get my best,” Ezell said. “As long as I do my job, the (win) light should come on.”