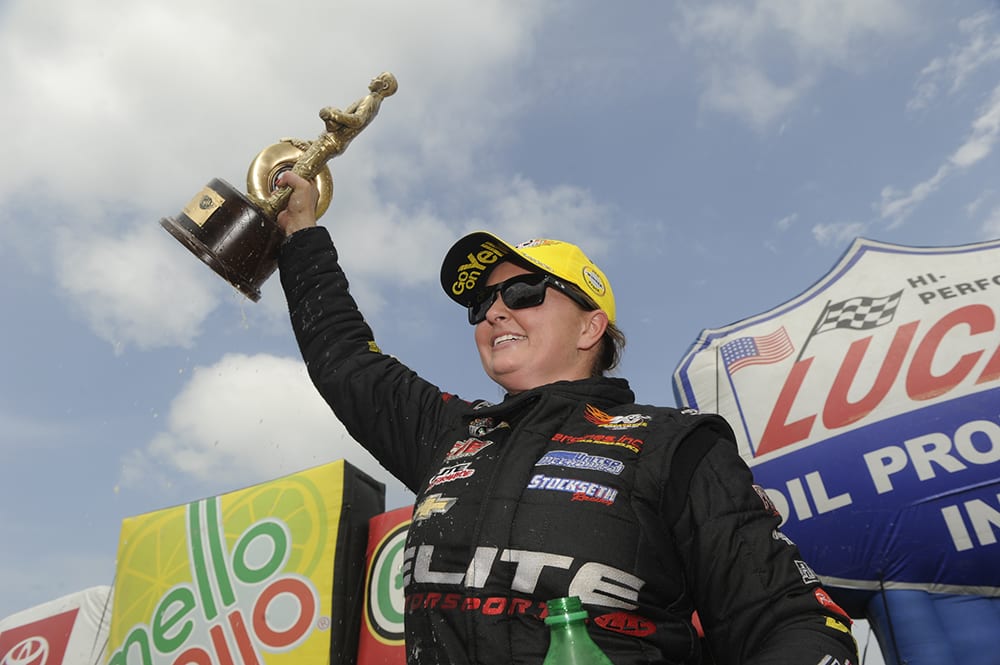 Yes, Erica Enders is well aware this isn’t the season everyone had envisioned coming off back-to-back Pro Stock world championships. No, she didn’t think the transition to the new rules for the class, the switch to a new manufacturer, a new car and a new engine development program would take as long as it has.

And, yes, Enders has heard some of the whispers at the track and read some of the thoughts from naysayers online who take a bit of delight in watching her struggles this year. But if you think any of that is going to keep Enders from pushing forward, then you may just be unfamiliar with how Enders, the first-ever female event winner and world champion in Pro Stock, and her Elite Motorsports team operate.

“The easiest thing in the entire world is to quit,” Enders says. “It’s not in my makeup and it’s not in any of my guys’ makeup, so a lot of it is going to be proving everybody wrong. We’ve done that every step of the way throughout my career.

“We hate the fact that we suck, but at the same time we just continue to dig deep and work hard, and that’s what going to turn the tables for us. I’m still very optimistic about the program and what’s to come for us. I have all the faith in the world the great places we’re headed. It’s just going to take a little time to get there.”

That unflappable demeanor has been a mainstay for Enders ever since joining the Pro Stock ranks more than a decade ago. But after winning 15 races over a two-year stretch following the move to Elite Motorsports, Enders’ calm, composed and collected approach has been tested at nearly every turn in 2016.

It’s a brave, new world of electronically fuel injected engines, shortened wheelie-bars and a 10,500 RPM rev-limiters in Pro Stock and nothing has come easy for Enders. A berth in the Countdown to the Championship isn’t a lock approaching the U.S. Nationals and Enders has yet to even advance to a final round, much less win a race in a year dominated by the teammate tandem of Greg Anderson and Jason Line.

That will test the resolve of even the steeliest of drivers, but Enders remains unfazed and focused only the road ahead. It’s an attitude and demeanor shaped by her father and further developed by team owner Richard Freeman, who Enders’ jokes has a “give-a-crap level that is pretty low.”

“He’s taught me how to handle a lot of that stuff and that’s been extremely helpful because I think the Internet gives people a platform to spew hate and voice their opinions with absolutely no consequence,” Enders says. “We’re real people and we’re working hard to get better. Instead of tearing somebody down, maybe either say something positive or don’t say anything at all. Richard certainly helps with that aspect and I’m thankful for it because I’ve become a much stronger person and a better driver because of it.”

The team remains equal parts mystified, frustrated and agitated that things haven’t clicked to this point, but Enders is quick to point out that the group has taken every means necessary to get things on track.

It is a point exemplified perfectly following a disappointing first-round loss in Sonoma where Enders’ Dodge Dart had an engine issue and she was forced to shut off before reaching the starting line. It was the latest blow in a year where not much has gone right, leading Freeman, Mark Ingersoll and Nick Ferri to take drastic measures.

“After Sonoma, we brought back everything we had in a body bag,” Enders admits. “Our guys, Richard included, got in a rental van and drove the motors home. That’s a pretty stout list of names there and they all got in a mini-van and drove all night. They switched drivers – 28 hours total drive time – to get back to Oklahoma to just take the engines apart, see what failed and rebuild them. We just all do whatever it takes to get where we need to go.”

At some point, Enders and the rest of a talented team hope to see those endless hours translate into something positive.

Regardless, though, it won’t change the way Enders feels about her team. Hand-picked as the last part of the puzzle before the 2014 NHRA season, Enders has meshed flawlessly with a group loaded with impressive accomplishments. Five-time world champion Jeg Coughlin joined the group in a full-time role this year, and has had his own share of struggles through much of 2016, but Enders has praised this group at every turn. None of it has ever seemed forced, though, and it’s that camaraderie that hasn’t made Enders question a thing this year, even in the midst of a multitude of challenges.

“I knew (the team) was different the moment I stepped foot on the pit mat of the test session before Pomona,” Enders says. “We have a great group of guys and a lot of natural team chemistry and we’re able to overcome a lot of stuff together. To see what the guys have done in the past and their racing history, it’s absolutely mind-boggling there’s no ego. They’re pretty sharp and successful, and I’m lucky to be teamed up with them. You can’t buy what we have, that natural team chemistry. It’s just a really unique atmosphere and the biggest thing is we have respect for one another. We trust each other. I know exactly where they stand at all times. It’s something I’m really, really proud of.”

Enders maintains she has stayed positive through a trying year, though not much can top the fun and enjoyment of standing in the winner’s circle race after race. The year has proven to be every bit the challenge – and then some – that Enders expected, but she believes there is a storybook ending still left in this chapter. After what Enders has already done with this team in only two years, it may be hard to deny that.

“I don’t think any of us assumed we would still be struggling this late in the season but what I have learned about us is regardless of the lack of trophy collection this year, it’s still an extremely positive environment,” Enders concludes. “I say it to make people laugh but I mean it from the bottom of my heart: I’d rather go to the bottom with these guys than the top with anybody else. It’s just part of the deal right now, and I feel like it’s these challenging times and the adversity that we’re facing, it proves what champions are made of.”