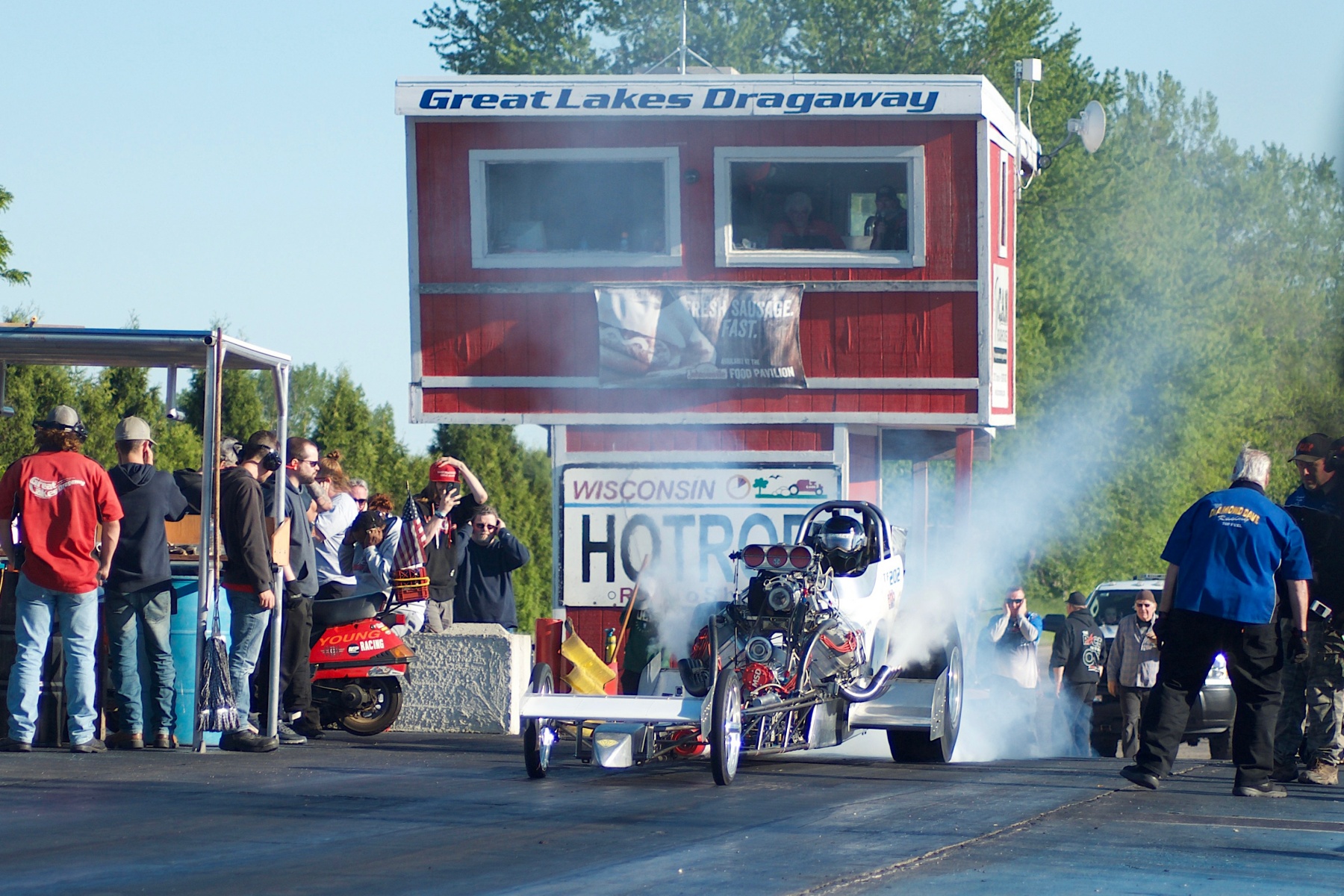 Few events are more celebrated than Great Lakes Dragaway’s Memorial Weekend Classics, which has been a staple for more than a half century at this iconic quarter-mile facility located in Union Grove, Wisconsin. The appeal of this event from a fan’s perspective is simple: All the good stuff is booked in for this special event, and the entertainment offered is incredibly diverse.

For fans of fast, heads-up doorslammers, the Chicago Wise Guys Match Race Circuit represents the quickest full-bodied cars on the property. Famously, this club was founded 27 years ago right here on the grounds of Great Lakes Dragaway when Pete Demos and a few friends began discussing with track owner Randy Henning the possibilities of launching a heads-up racing series that incorporated the area’s fastest doorslammers into a regular feature.

Naturally, the earliest proving grounds for this hot new act was at Union Grove, and Demos became the president of the club. He’s been a driving force through steady leadership ever since. He’s kept things extremely simple on the rules front, basically by not having any that pertain to power adders or weight breaks. As a result, fans enjoy a diverse mix of 200-mph race cars utilizing nitrous, blowers, turbos, ProChargers, as well as normally aspirated powerplants, all propelling a wide assortment of entertaining vehicles. 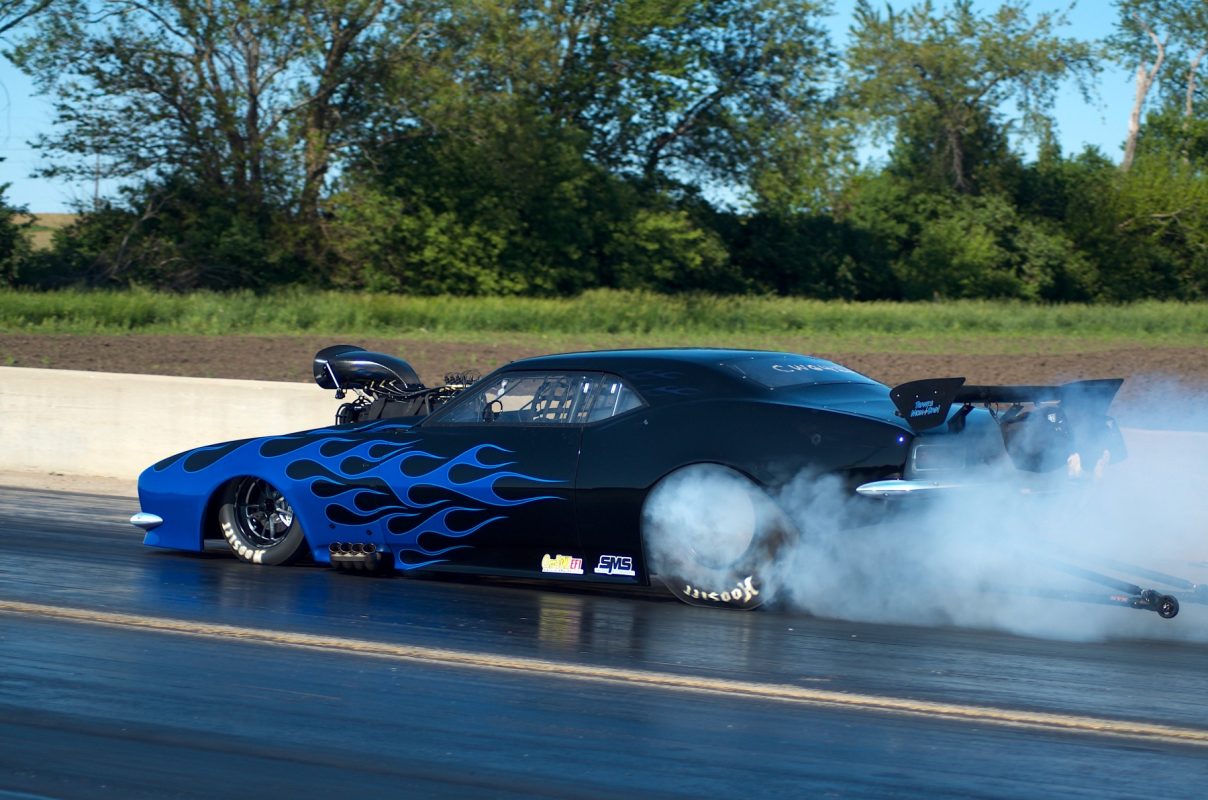 If nostalgia is more your thing, the Brew City Gassers offer a ton of excitement, featuring bumper-scraping, pre-1967 American muscle. This club also got its start right here at Great Lakes Dragaway, holding its first event in April 2018. Despite being only a few years old, this club has grown fast and boasts a membership roll of 52 racers. The Brew City Gassers is a touring series that typically schedules 12-14 events per season. Fans enjoy everything from fat-fendered vehicles of the 1940s to vintage classics ranging from Plymouth Satellites, Ford Galaxies, Corvettes, Bel Airs and much more.

“We visit Great Lakes probably 4-6 times a year,” says series founder Mark Davis. “We encourage our members to buy a season race pass at Great Lakes because the track does so much for us, and since they’re open six days a week, it’s also a great value to our members.”

Another popular traveling series that’s been part of the Memorial Weekend in recent years is the Pro-E85 series. The mission of this group is to entertain fans with stock-appearing cars and trucks that perform insane burnouts and monster wheelstands, all while “racing green” on American-made E85 ethanol. The competition is close and utilizes the full quarter mile, racing on 8.90 and 9.90 indexes, as well as the brand-new 10.0 class, which was introduced in 2021. Fans are treated to a wide array of vehicles, including Camaros and Mustangs, as well as 1950s model Chevrolets and even late model pickup trucks. 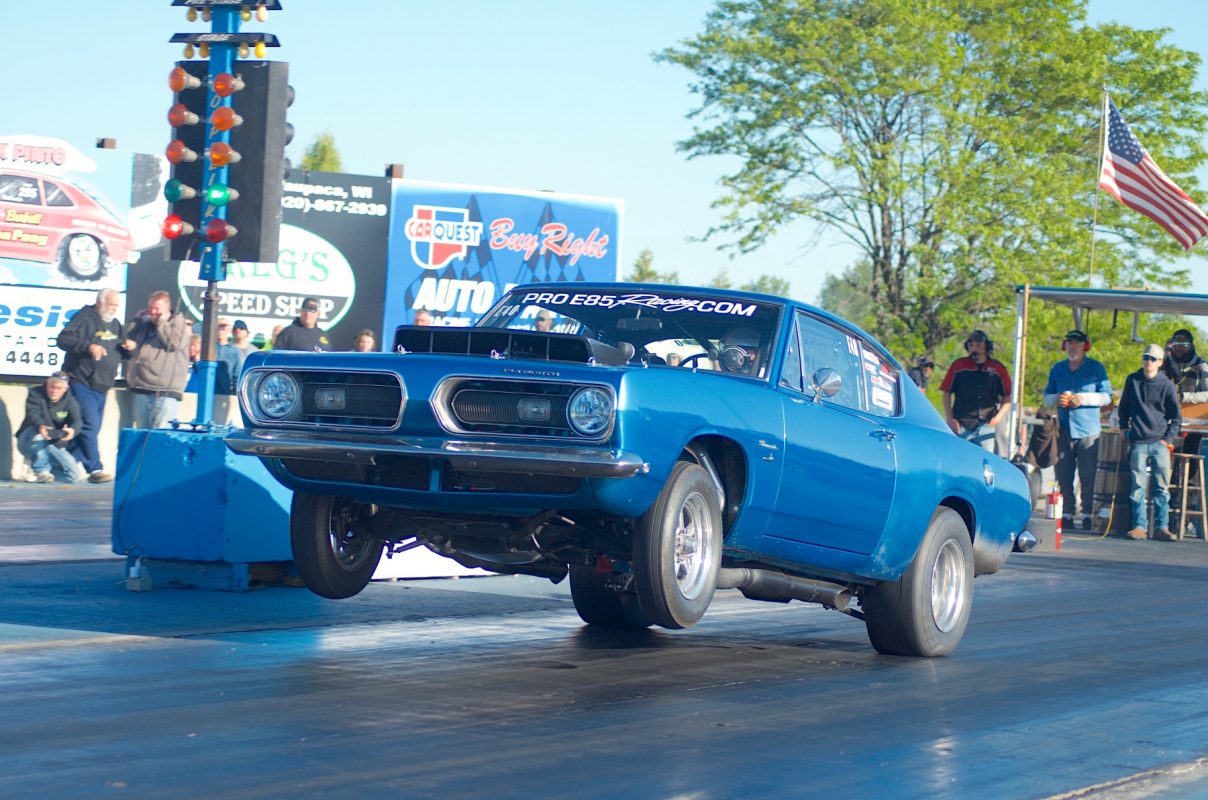 “Mopar John” Zafran campaigns the only Chrysler in the club with his beautiful 1968 Barracuda, which he’s owned since 1990. “I’m the underdog in the group with my stock suspension drag radial car that weighs 3,200 pounds!”

Roughly 15 members were in attendance this weekend and put on a great show for the fans.

The Midwest Nostalgia Pro Stock Association was also represented in fine style with a great group of cars, including the STP Pontiac Trans Am of Josh Parks, which is reminiscent of Rickie Smith’s 1992 Trans Am Pro Stocker. Jim Park’s “Red Rat” Vega is another beautifully done race car within the Midwest series. The Williams family also brought out their “Doc Holliday” Plymouth Arrow, which continues to be a fan favorite.

The Bunny Burkett-tribute “Cotton Pony” Ford Pinto is another beloved Midwest car, with brand-new driver Jackie Cannon at the controls this year. The Pinto had fans on the edge of their seats with some wild wheelstanding launches on Saturday afternoon. 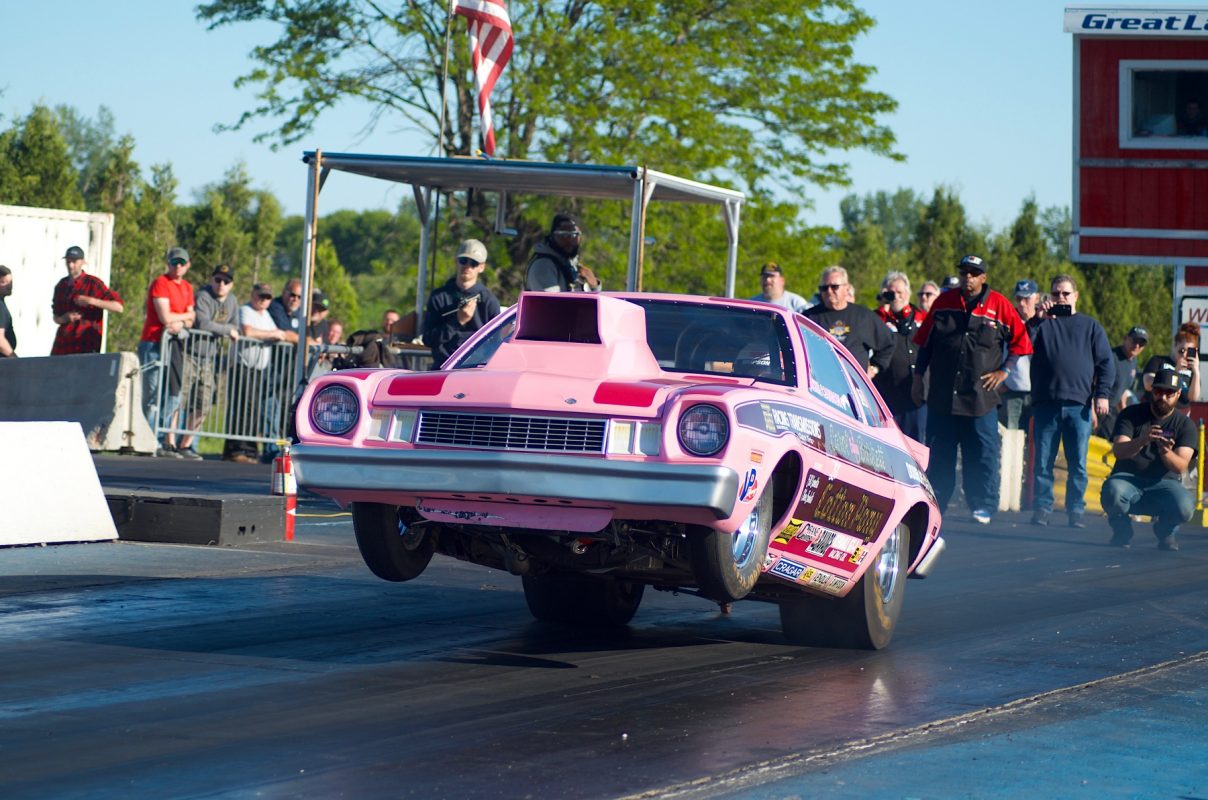 The Memorial event is also famous for its robust jet car show, featuring six fire-breathing jet cars running multiple times a day. Among the most unique jets in attendance this year was a pair of cars brought out by the Douthit family, who’ve been in the exhibition drag racing business for 46 years and counting. David Douthit was at the controls of possibly the only 1965 Ford Mustang-bodied jet car in existence. He performed side-by-side match races throughout the weekend with the other team car, a 1969 Chevy Nova-bodied jet named Black Pearl, piloted by George Whiteman.

It would be hard to imagine a Great Lakes Memorial Weekend without the iconic “Chevy Rebellion” wheelstander of Richard Hutchens, who’s been a featured attraction at this event since 1968. Hutchens, at 83 years of age, still entertains fans as only he can, with multiple generations of race goers enjoying his performances at Great Lakes for well over 50 years.

If that’s not all, nitro and alcohol Funny Cars, both nostalgia and modern floppers, were making runs throughout the weekend, along with front-engine dragsters and Altereds. 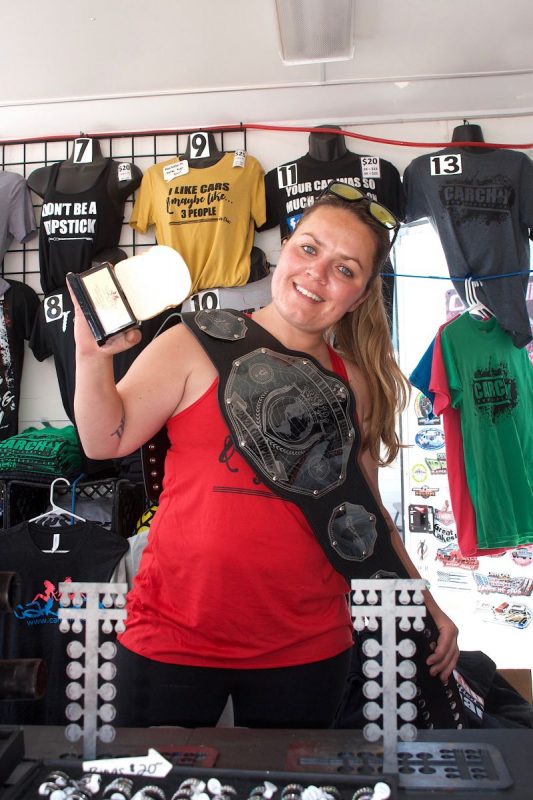 It would be hard to pack more entertainment into a single weekend, and to close out another memorable show, Car Chix founder Jeanette DesJardins held her annual bracket race, dubbed “Battle of the Belts, Battle of the Sexes.” The program featured three bracket classes on Sunday: Pro, Street and Jr. Dragster, with the guys and gals going head to head in eliminations, with a runoff to determine an overall victor.

All three category winners received a WWF-style leather belt, while the loser was awarded a custom sandwich trophy on a pedestal. “We advertised the whole thing as ‘May 30 the kitchen is closed…so make your own sandwich!’ We like to have fun!” laughs DesJardins.

While the competition is both fierce and lighthearted, this portion of the festivities is also credited with introducing many new participants to drag racing. “This is the second running of the Battle of the Sexes race, and we started noticing that plenty of people who don’t normally race were entering this event, so we conveyed the message that there’s no need to be embarrassed, and we’re here to walk you through the whole thing, even if you happen to be a complete novice to drag racing. It’s getting more people involved in the sport, which is fantastic!” DesJardins beams.

With another Memorial Classics in the books, this event continues to be a gathering that’s celebrated for its longevity and remains tremendously entertaining on so many levels.