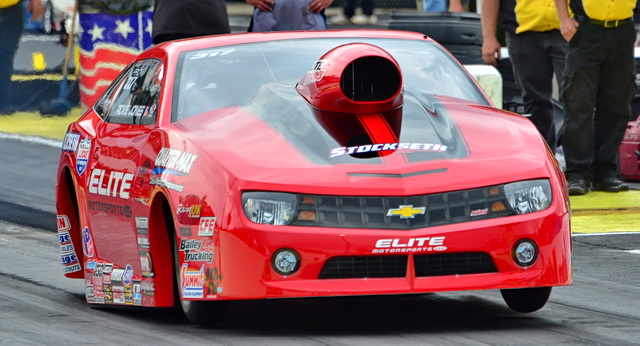 Continuing his limited appearances with the NHRA Mello Yello Tour this year, Rickie Jones heads to the Chevrolet Performance US Nationals in the Elite Motorsports-backed RJ Race Cars Camaro looking for his first NHRA Pro Stock win. Engines, Inc. of Jonesboro, Aks. will be joining Elite Motorsports as major sponsor for Jones at the “Big Go”.

Engines, Inc provides diesel powered products for OEM, Marine, Agriculture and Industrial customers. The family owned business, headed by Lloyd and Linda Wofford, services the racing industry with high powered generators. As racing enthusiasts themselves, Lloyd fields both a Super Stock Hemi and an A Super Mod in Comp Eliminator. Larry Stewart joins the Woffords to make it a four car team with his 2010 Super Stock Challenger, and 2011 Stock Challenger.

“Lloyd and Engines, Inc. have been with us all year in an associate role,” Jones said. “He’s a really nice guy and builds some of the best generators in the world. We appreciate him stepping up his involvement for Indy.

“We’re still looking for our first win with Elite Performance and for me personally in NHRA Pro Stock,” Jones continued. “I’ve been fortunate to win a couple of ADRL Pro Nitrous events last year, but I still need to get that Wally. Hopefully, Indy will be our event.

“We’re coming off the Western Swing running strong, courtesy of Terry Chandler and Chandler Aviation who made it possible for us to run those events. We seem to have found our balance in performance and have a great combination for our engine and car. We’re doing everything we can to move forward. I feel we definitely have enough power to qualify number one and win races if we hit everything just right, and that’s what we’re focused on.”