Enders-Stevens and Funny Car driver Alexis DeJoria have each carded two victories this year in their respective classes, but even if both manage to race through to the trophy round of the Atlanta race, Enders-Stevens would get the first shot at reaching the milestone because the Pro Stock final takes place just before the Funny Car title round. However, they could both be one-upped by a Pro Stock Motorcycle competitor as three female riders are on the entry list for the event. 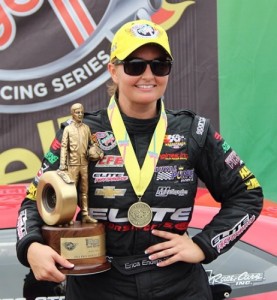 It’s a really exciting deal, and the media along with everyone at NHRA have been putting a lot of emphasis on the chase to see who will be the 100th winner,” Enders-Stevens said. “I’d love to be the one, more for my guys than anything else. They’re the ones that deserve all the recognition. I’m just the lucky person that gets to drive the car.

“Alexis and I are becoming good friends and I’d be super happy for her also. Then you have the girls in Pro Stock Motorcycle and Brittany (Force, Top Fuel) and Courtney (Force, Funny Car), and it’s easy to see that there are a lot of us reaching for the same brass ring.

“No matter who gets it, I think it’s an awesome deal for all of the women who compete and have competed in the past in our sport. Having so many successful female racers is a huge part of what makes NHRA drag racing so unique.”

A total of 14 women have won NHRA national events, with eight-time winner Enders-Stevens ranked a lofty third on the list behind legends Angelle Sampey (41) and Shirley Muldowney (18).

“We all kind of stick together and support one another,” Enders-Stevens said. “I’m very close to Shirley and Angelle. They’ve been so great to me. And the girls that are out there racing now, we are all friends. I think more than anything, even though the 100th win by a woman is what everyone is talking about, we really just want to be considered racers. We want to let our accomplishments speak for themselves.”

Enders-Stevens are her privately funded Elite Motorsports Camaro have certainly quieted the critics this season. Aside from her two victories in four final-round showings, she has had the fastest car on the property at half of the first six races of the season. Her top speed of 214.69 mph, which she posted in Gainesville, Fla., set the national record. She has also topped the championship points for the last three races.

“It’s been an awesome start to the year,” said Enders-Stevens, who also won the special K&N Horsepower Challenge in Las Vegas. “Our team owner, Richard Freeman, has given us everything we need to win and the guys have lived up to his expectations. Most of all, we’re having fun and enjoying the ride.

“Winning the 100th race, that would add a big bolt of energy to our team. We’re certainly going to do everything we can to make it happen.”