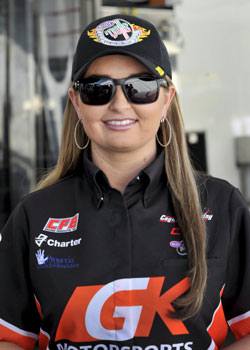 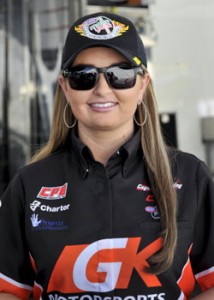 Erica Enders-Stevens is easily the most successful woman in NHRA Pro Stock history. After a stellar 2012 season behind the wheel of her GK Motorsports Chevy that produced four wins in seven final rounds and a fourth-place points finish, there is one thing that would make her even more proud: to win a Wally in front of her hometown crowd at the O’Reilly Auto Parts NHRA SpringNationals presented by Super Start Batteries at Royal Purple Raceway.

“It would be amazing to win at home,” Enders-Stevens said.

“We were able to get it done in Super Gas at the national event in 2004. I’m hopeful that we can seal the deal in Pro Stock as well. Not only am I from Houston, but my sponsors are also. It would be twice as special.”

Enders-Stevens is hoping that the momentum her team produced from winning the NHRA Arizona Nationals in Phoenix in late February will help push her to a second victory this season in the NHRA Mello Yello Drag Racing Series. Morgan Lucas (Top Fuel), Mike Neff (Funny Car), Vincent Nobile (Pro Stock), and Andrew Hines (Pro Stock Motorcycle) are the defending winners of the event that will be televised on ESPN2HD.

Enders-Stevens practically grew up at Royal Purple Raceway, where she got her first taste of speed behind the wheel of an NHRA Jr. Dragster.

“I obviously love racing at home,” Enders-Stevens said. “I made my first pass at RPR back in 1992 in my Jr. Dragster, and prior to that, I grew up there watching my dad race. We had a lot of success in my JDRL and Sportsman days at RPR. That track and the Angel family [track owners] mean a lot to me.”

Enders-Stevens is already off to a great start this season with one win in three final-round appearances as well as a runner-up finish in the lucrative K&N Horsepower Challenge, a specialty bonus event that took place in Las Vegas. Currently sitting third in the points standings, she is looking forward to more positive results in Houston and throughout the 2013 season.

“I’m pleased with our efforts so far this season, but being the perfectionist and eternal optimist that I am, I know we can do better,” Enders-Stevens said. “We let a big double-up win in Vegas slip through our fingers. We have been testing nonstop since then, and I’m confident that we are bettering our new Chevy Camaro and ourselves. One thing is for certain: When we go up to the line, I know we have all given 150 percent.”

If the Pro Stock fan favorite is going to add a Royal Purple Raceway victory to her list of accomplishments, she’ll have to hold off a tough group of challengers, including two-time defending event winner Nobile, defending world champ Allen Johnson, series points leader Mike Edwards, and Summit Racing’s Jason Line and Greg Anderson, among others.