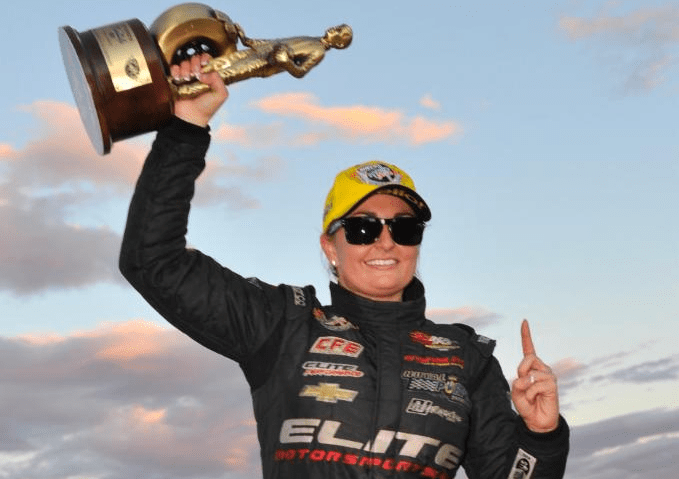 The Elite Motorsports driver is the first woman to win the prestigious award, and she beat out NASCAR champion Kevin Harvick, IndyCar champ Will Power, Formula 1 titlist Lewis Hamilton and others among motorsports’ best. Enders-Stevens also won the magazine’s Drag Racer of the Year Award.

“I truly can’t put into words how I felt after I found out we had won the Racer of the Year award,” Enders-Stevens said. “First of all, I am incredibly thankful for all the fans who took time to vote for us. I’ve always said my fans are the best, and they proved it again.”

Enders-Stevens, 31, was fourth in the points standings with four races remaining, but she raced to the semifinals in St. Louis and Reading, Pa., to move to second place.

At the penultimate race, in Las Vegas, Enders-Stevens faced points leader Jason Line in a pivotal semifinal battle. She won that round and then beat five-time Pro Stock champion Jeg Coughlin Jr. in the final round to win the race and take over the points lead.

At the season finale in Pomona, Calif., Enders-Stevens and Line were once again on a collision course as the two were on opposite sides of the ladder. After winning her first two rounds, Enders-Stevens faced Jonathan Gray in the semifinals. For the first time in NHRA pro history, both drivers ripped off perfect .000-second reaction times, with Enders-Stevens advancing to the final thanks to a quicker pass.

That put her against Line in a winner-take-all final round, and when Line went red, Enders-Stevens joined Shirley Muldowney and Angelle Sampey as the only women to win an NHRA title.

“When my Elite Motorsports team and I achieved my lifelong goal of winning the NHRA Pro Stock championship last year, we all felt on top of the world,” Enders-Stevens said. “When we found out we won the prestigious Racer of the Year award, those feelings came back. I’ve got to thank my team owner Richard Freeman, my crew chiefs Rick and Rickie Jones and everyone at Elite for making the 2014 season the best of my career. We were fortunate enough to win six races – and the special K&N Horsepower Challenge event – and we were fast all year, thanks to our tremendous horsepower from Jake Hairston and Nick Ferri.

“But our championship was still in doubt, right down to the last round of the last race. In what was truly a Hollywood ending, we were able to win that round, that race and the championship.”

Enders-Stevens was named to the American Auto Racing Writers & Broadcasters Association All-America Team for 2014. She was the lone female among the eight drivers selected.

“Shirley Muldowney was one of my heroes growing up, and I learned a lot from her and Angelle Sampey during my career,” Enders-Stevens said. “We are just a small part of a growing fraternity of women who are chasing their goals in all forms of motorsports. Hopefully one day soon we can all simply be considered racers.”