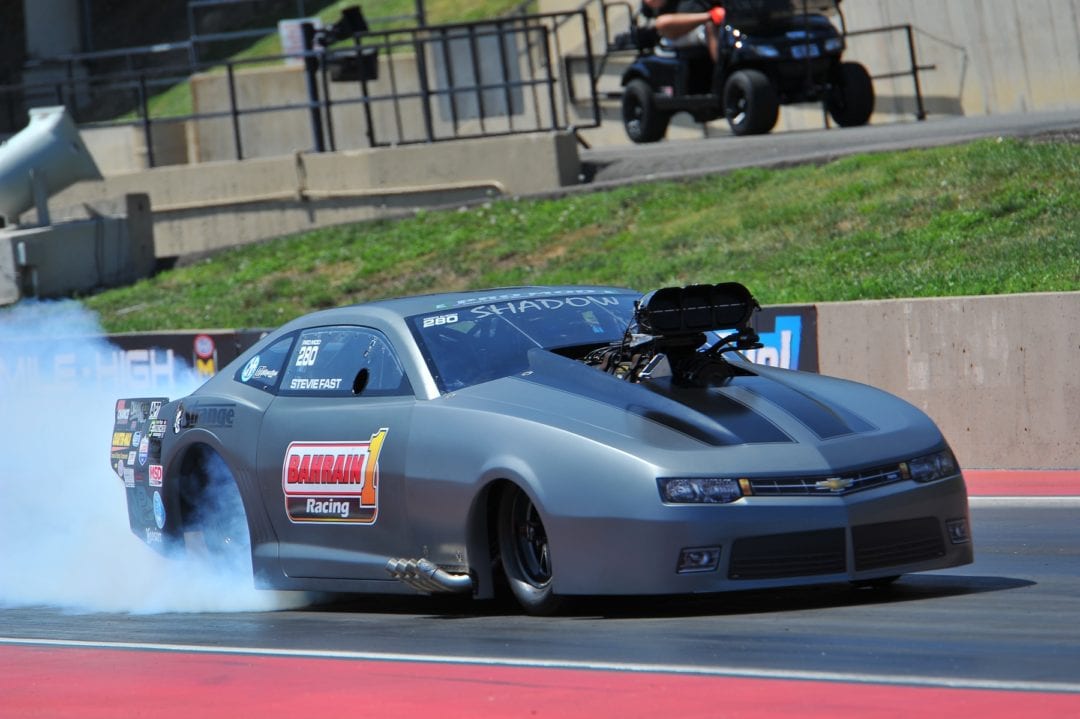 After two straight disappointing performances during the 2018 E3 Spark Plugs NHRA Pro Mod Drag Racing Series presented by J&A Service season, Stevie “Fast” Jackson is looking to get his swagger back and the Big Go could be the perfect place for him to find it.

The NHRA Pro Mod standout has struggled since a crash in Charlotte, dropping from second in points to eighth after failing to qualify at the past two events. After finishing third in points a year ago in his NHRA Pro Mod rookie season, the fan-favorite driver is looking to get back on track and performing well on drag racing’s biggest stage as part of this weekend’s prestigious Chevrolet Performance U.S. Nationals at Lucas Oil Raceway at Indianapolis would be the ideal location.

“It’s been hard to be me when we’ve sucked as much as we’ve sucked lately,” said Jackson, who won two races in 2017. “We’re showing up in Indy ready to go and I want to get that chip on my shoulder again, get that swagger back and perform the way we’re capable of performing. We’ve got winning on our mind and I’m as hungry as I’ve ever been. We expect to do well in Indy and we’re looking forward to this last stretch of the season.”

The race, which is presented by Al-Anabi Performance, is the eighth of 12 events during the 2018 E3 Spark Plugs NHRA Pro Mod Drag Racing Series season and will be shown on Fox Sports 1 (FS1) and Fox Sports 2 (FS2). Sidnei Frigo is the defending winner at Indy, and Jackson would like to be the next to claim his moment of glory at the world’s biggest drag race.

Jackson finished as runner-up in Charlotte, but crashed at the finish line and it’s taken time to get back to speed. That led to not qualifying in Bristol and Norwalk against the loaded NHRA Pro Mod field, but more than two months off has given Jackson, who advanced to four final rounds a year ago, time to regroup. The disappointing efforts in Bristol and Norwalk didn’t sit well with the talented Jackson and his team, which has led to some serious work being put in over the summer.

“We’ve definitely figured out a lot about the program and I feel like we’ve got momentum coming into Indy,” Jackson said. “If we’re not ready for this race, there’s nothing else we can to do be ready. It was emotionally draining (to not qualify) and I take this personally and wear my heart on my sleeve. We tried some different stuff and it’s taken longer to get it than I thought it would. But from a preparation standpoint, we’re as prepared as we can be.”

Jackson hopes that leads to his first career Chevrolet Performance U.S. Nationals victory, but it won’t be easy against a loaded lineup that includes points leader and three-time world champion Rickie Smith, Mike Janis, rookie Chad Green, Mike Castellana, Todd Tutterow and Charlotte winner Jose Gonzalez. In all, Jackson will face off with 30 talented competitors in what will surely been an extremely quick qualifying field. With five qualifying sessions, Jackson knows the weekend will be rigorous, but the motivation of winning at Indy is more than enough to get him excited.

“This is one you want to win and we’re all fired up,” Jackson said. “This is definitely a race that’s on your bucket list to win. But it’s not just the U.S. Nationals, it’s this whole NHRA Pro Mod Series. It’s top-shelf competition and it’s an honor just to race here. You’ve got guys you want to crush, but you really respect them. They’re the most talented people in the world running these cars and these people are just vicious. But it’s been a childhood dream to just race at Indy.”