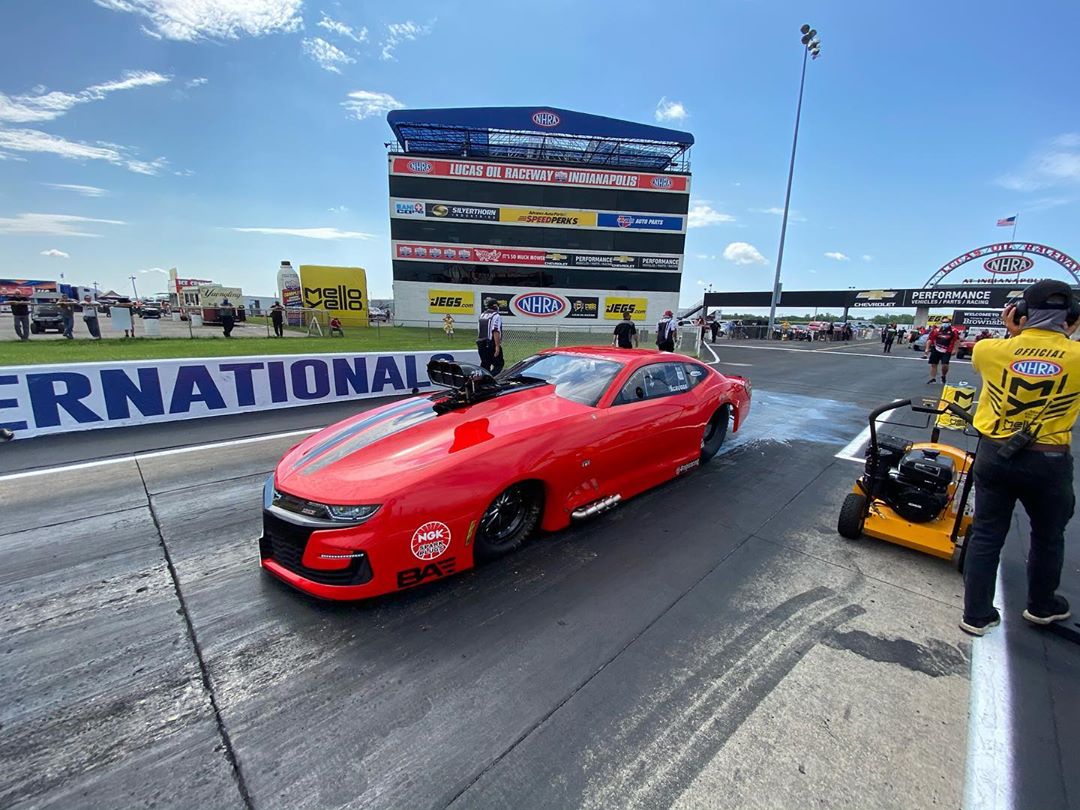 By advancing to the final round of the first race of the 2020 season in the E3 Spark Plugs NHRA Pro Mod Drag Racing Series presented by J&A Service, Jason Scruggs and Chad Green put themselves in position to win their first career race in the class.

But with the completion of that race postponed to the upcoming DENSO Auto Parts U.S. Nationals, the chance to grab that first victory now comes this weekend as part of the Dodge NHRA Indy Nationals presented by Pennzoil. Like the opener, which took place last month, this race also takes place at Lucas Oil Raceway at Indianapolis, and Scruggs will again look to put together an impressive weekend in his blown Scruggs Farm Camaro from Jerry Bickel Race Cars.

In just his seventh career NHRA Pro Mod start, Scruggs, who has enjoy remarkable success in his doorslammer career, advanced to his first career final, making significant strides in the off-season.

“We were happy to go some rounds,” Scruggs said. “We knew we could run with everyone here, so I was glad we were able to prove that. At the end of the day, we’ve got a good car. Everything kind of fell into place and we won the close races, and that’s what you have to do at this level. We changed some stuff on the car and the way we were running the car, and it has responded well.”

The race, which is presented by Jerry Bickel Race Cars, is the second event of the 2020 E3 Spark Plugs NHRA Pro Mod Drag Racing Series season and will be shown on Fox Sports 2 (FS2). It will determine the first winner of the year and an abundance of talent will be on hand, including reigning world champ Stevie “Fast” Jackson, Todd Tutterow, Mike Castellana, Mike Janis and Khalid AlBalooshi. 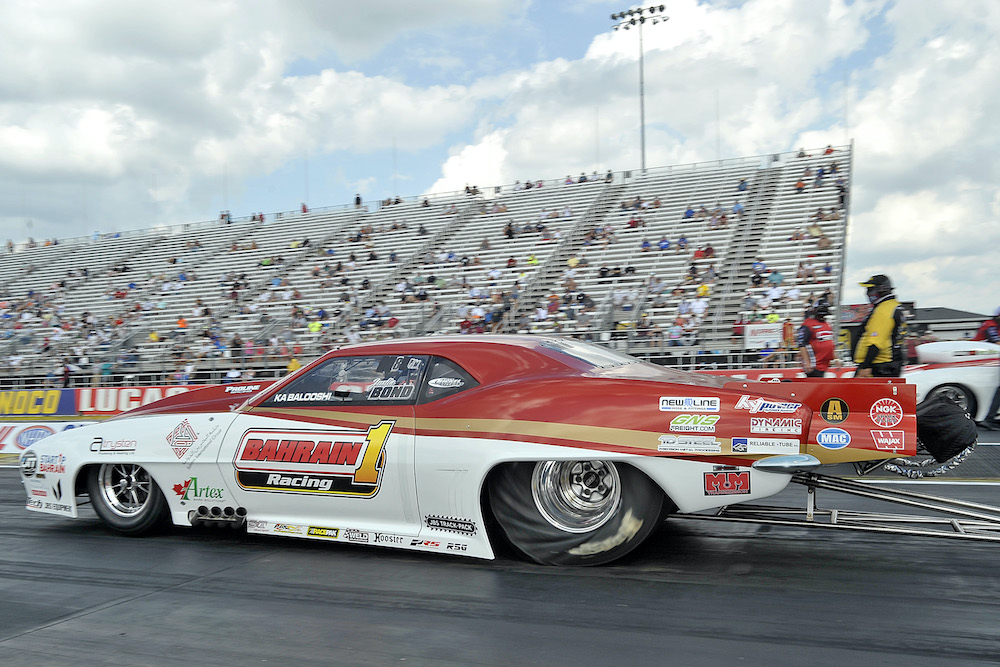 It was an entertaining debut to the 2020 Pro Mod season at Indy last month, as the semifinals included a car with each of the four different power adders. Along with Scruggs and Green, who pilots the nitrous-powered Bond-Coat Corvette, Kris Thorne advanced in his turbocharger car, while Clint Satterfield raced well with a centrifugal supercharger, which were just allowed into the class this year. It represented the parity in the class at its finest, as three of the four semifinalists are after their first career victory in the series.

Satterfield has won in the NHRA Pro Mod ranks previously, but his start marked a clear resurgence in his program. That has him confident for this weekend, where the veteran looks to return to the winner’s circle.

“The car is really fast and we’ve been able to apply the power well,” Satterfield said. “We know we had lots of power, but it was all about applying it. We had great faith the ProCharger would be fast and it has been, plus the car just drives phenomenally well. It’s just a matter of continuing to go down the track because this car just wants to go fast, no matter if it’s hot or cold.”

Green impressed last month with victories against Tutterow, Brandon Snider and Thorne, advancing to his third final round. The warmer conditions have typically been beneficial to the nitrous cars and Green had the quickest run of the weekend during eliminations last month, putting him in a great position for the weekend. Scruggs, though, enjoys the variety of challenges the class presents.

“There’s a lot of good cars in this class and we knew it would be a hard challenge, but we’ve managed to run pretty well,” Scruggs said. “We’ve got great people who help and great equipment, so that’s been big. Everybody is so tough and so good in this class and it all has to come together. Our goal is to come out here, have a good time and enjoy ourselves, and then hopefully let them know we’re here and pull out a Wally before we’re done.”

Jerry Bickel Race Cars is the presenting sponsor for the E3 Spark Plugs NHRA Pro Mod Drag Racing Series race in Indy, as the class looks to award its first winner after a memorable 2019 season. Jerry Bickel Race Cars has enjoyed tremendous success in the class, with a client list that current includes category standouts like Albalooshi, who qualified No. 1 at the first race of the season, Thorne, Tutterow, Castellana, Green, Scruggs, Snider, Jonathan Gray, Bo Butner, who is driving for multi-time world champ Rickie Smith, Jeffrey Barker and Rick Hord.

Jerry Bickel Race Cars also offers a one-stop shop and an extensive variety of services, with its strong track record in the Pro Mod making it a trusted name for drivers all over the world.

Featuring the world’s fastest doorslammer race cars, the E3 Spark Plugs NHRA Pro Mod Drag Racing Series presented by J&A Service offers something for every kind of hot-rodding enthusiast. The class is highlighted by historic muscle cars, like ’67 Mustangs, ’68 Firebirds and ’69 Camaros, as well as a variety of late model American muscle cars.

The first of two E3 Spark Plugs NHRA Pro Mod Drag Racing Series presented by J&A Service qualifying sessions takes place at 11:00 a.m. and 3:15 p.m. on Saturday. The first round of Pro Mod eliminations are scheduled for 11:40 a.m. on Sunday.

A limited number of tickets are on sale now to the Dodge NHRA Indy Nationals. Tickets may be purchased by visiting NHRA.com or calling 800-884-NHRA. 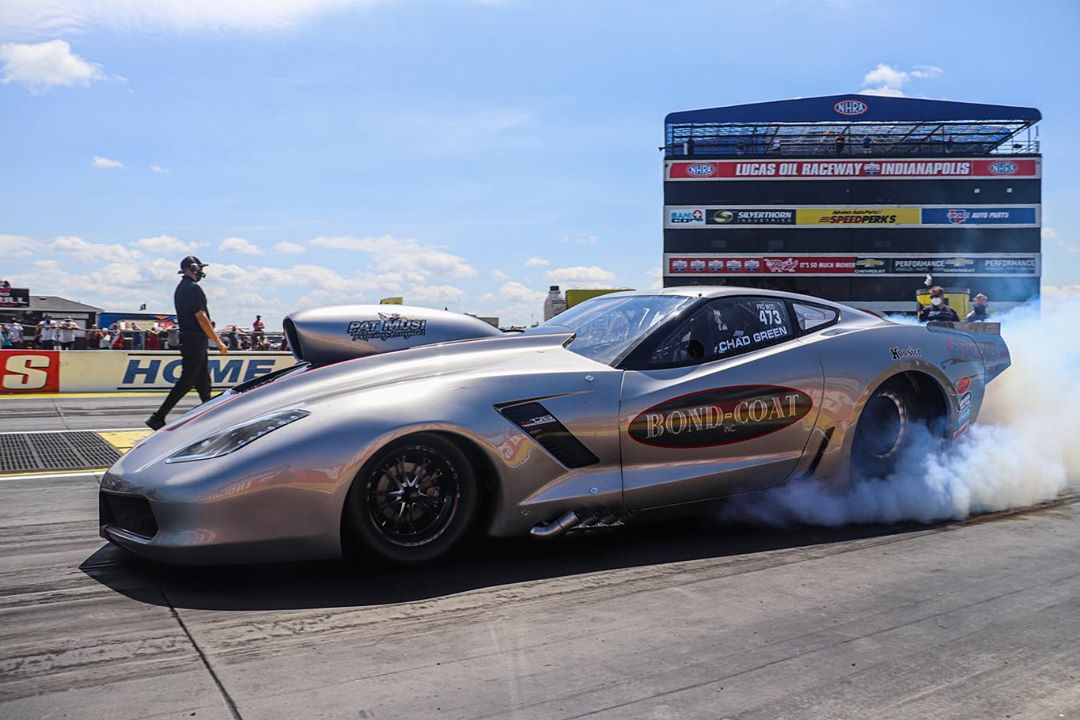