The Throwdown was the final race of the season for the series’ new Pingel Top Fuel Motorcycle class. Ten riders joined the series across three races, but in the end it was Sam Wills taking the final event win and the 2022 series championship. Wills was tuned by Pro Mod event runner-up Todd Martin, a former motorcycle racer.

Dustin Nesloney went into Tulsa looking for redemption after going red in the final round of the last race at U.S. 131 Motorsports Park in Martin, Michigan. The Pro Mod points leader found redemption and more as he drove his ProCharger-boosted ‘17 Camaro to the MWDRS Great Bend Nationals win over Aaron Wells on Friday morning, then notched another victory in the Throwdown portion of the weekend on Saturday night. His only bye run of the weekend came in the final round of the Tulsa race, as opponent Todd Martin broke an oil pump and wasn’t able to make the run.

“Rolling into Tulsa, we knew what we wanted to do, we just didn’t really think it was going to play out like it did,” Nesloney said. “The cards fell in our favor. Aside from that, the Proline team and Brandon [Stroud] and my crew, Cody and the guys, it’s pretty much like a machine. It’s repetition over and over. I heard them announcing ‘they make it look easy.’ It’s not as easy as people think it is. It’s all about the details. There’s a lot that goes into it. You don’t get to where we’re at and run the runs like we do consistency without working at it. I’m still in kind of a daze over the whole thing.”

While Nesloney’s third win of the season didn’t result from a side-by-side final round like his first win at the season opener, it did take a lot of effort to reach that final round. Between testing, qualifying, and eliminations for two races, Nesloney and his team made over 10 runs down the Tulsa eighth mile.

“I literally felt like we were in such a groove,” Nesloney said. “You were gonna have to swing for it if you were gonna come after us. It’s kind of crazy how far we’ve come since October [2021] when we debuted the car and brushed the wall. The car was a handful when we first got it. Over the season, we’ve lined it out and it’s shown that we steadily worked at it. It’s not just me, it’s Brandon and the crew that maintains the car. There’s a lot that goes into running a successful program. It’s not just, ‘hey, you show up and things work.’ We work hard at what we do, and it paid off.”

After seven of eight races, Nesloney now has three wins and two runner-up finishes. Nesloney continued to heap on the praise for tuner Brandon Stroud, Proline Racing, and Nesloney’s crew members for their consistent success.

“These things are a handful, especially when you’re running in the 3.60s with one,” said Nesloney, who also thanked his wife and kids for supporting his racing program. “But when I get in that car, I worry about nothing but doing what I need to do. Brandon’s got the tuneup, the guys have the car, I do what I’ve got to do. That’s it. I’m not second-guessing what they do. They do their job, I do my job.”

Nesloney clinched the championship during the Tulsa race, but the Texas native still plans on attending the Xtreme Texas World Finals, Oct. 21-22, at Xtreme Raceway Park in Ferris, Texas. Last time he was there, he and fellow Proline driver Daniel Pharris ran side-by-side 3.57s in the final round. He’s looking for a similar performance this time around.

“When we go to Ferris, if the conditions are right, we’re going to let it hang out,” Nesloney said.

Just a few weeks after winning the last MWDRS race at Martin, Chris Marshall cleaned house in Top Alcohol Funny Car at Tulsa, qualifying No. 1 and winning both the Great Bend and Tulsa races in his Disturbed Racing Camaro. He defeated championship challenger Annie Whiteley in the Great Bend final round, then knocked out Texas driver Bryan Brown in the Tulsa final. The clean sweep was a much-needed boost for Marshall as he looks to finish out the season strong.

“That was the way I dreamed it up,” Marshall said. “Obviously for the points, but also for the big checks. The money is really important right now, so that was the best outcome possible. We got four checks since they pay $1,000 for the No. 1 qualifiers. We held the No. 1 spot for both races, so that was really cool. We definitely got the maximum amount of money we could have.”

Marshall realized he hurt his engine in the final round at Martin, and without spare parts due to supply chain issues, Marshall had to dip into his “do not use except in case of emergency” parts for the Great Bend race. The parts held up, as he defeated Whiteley with a 3.614 at 212.90 in the final round. A connecting rod failed in the final qualifier for Tulsa, though, so Marshall had to swap in a spare motor that carried him through eliminations.

The spare motor showed out in the Tulsa final, helping Marshall record a 3.553 at 214.79 to beat Brown’s 3.641 at 209.85. Not only was that the quickest pass in the brief history of MWDRS Top Alcohol Funny Car, but it was also the overall quickest eighth-mile pass for a Top Alcohol Funny Car. Defending MWDRS champion Sean Bellemeur went 3.556 to the eighth mile when he set the quarter-mile NHRA TAFC record.

“The conditions were killer and we really needed to win and put a stamp on it,” Marshall said of the record run. “It was a really fun pass. The car was wheels up the whole way. I was driving it hard. It’s night time and the shift lights and cameras are flashing. It was just amazing. I could feel that it was fast. It’s a quarter-mile track and we only run eighth-mile, so I get to see the scoreboard when I go by it. I told my guys, ‘Man, if I wasn’t strapped in this car, I swear I would’ve jumped out before I got stopped because I was so excited.’ I couldn’t even believe it.”

On top of the mechanical wear and tear, Marshall and his team, which includes wife Briana, were pushed to the limits as they made the maximum number of runs for the two races. Prior to the Tulsa final, Marshall used a 3.671 at 211.36 to knock out Bill Bernard and his 3.70 in the first round, then singled his way to a 3.597 at 213.50 in the semis.

“We worked on the car almost every run,” Marshall said, adding that it was beyond routine maintenance. “Something went wrong here or there. We busted our butts. This was the first race Briana was back for. She missed a few races there and we won that one in Martin. She’s back and she’s a big part of the crew. She was helping change motors. She’s right there in the middle of it all. It was important that she was here. We didn’t have enough crew without her for the amount of work we had to go through. Twelve runs in a couple days, that’s a lot of runs for us.”

It was a Kansas vs. Colorado final round in Top Dragster to decide the Great Bend race winner. Mulvane, Kansas-based Karl Jones used a .010 light and a 4.67 on a 4.65 dial-in to hold off Delaina Whiteley’s .016 light and 4.314 on a 4.30 dial-in in her Grand Junction, Colorado-based dragster.

Texan Mark Griffin qualified in the middle of the pack in Top Sportsman, but he used consistent passes throughout eliminations in his ’68 Camaro to race his way to meet up with No. 2 qualifier Jimmy Lewis and his ’08 GXP in the Tulsa final round. Griffin took a slight starting line advantage and was ahead again at the finish line, winning with a 4.485 on a 4.47 dial-in over Lewis’ 4.063 on a 4.04 dial-in. It was Griffin’s first-ever race win in his unique Compressed Air Supercharging-boosted Camaro. 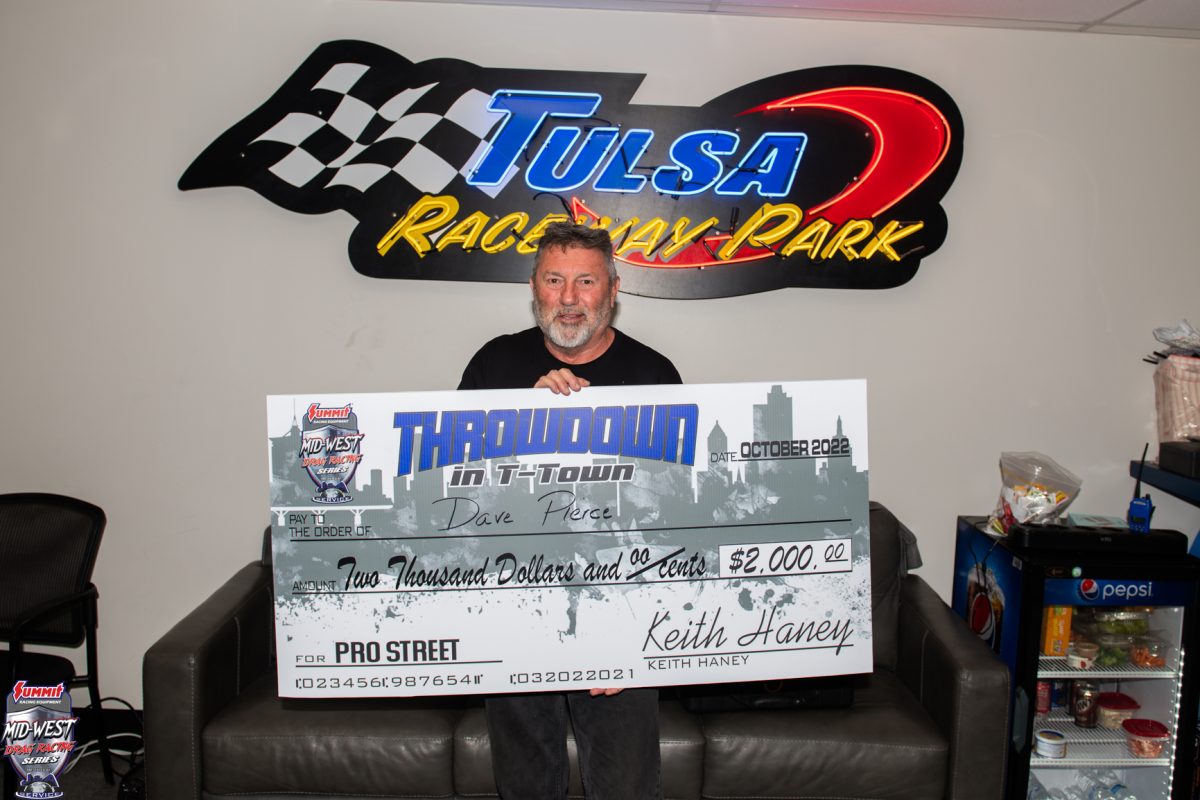 In its second race with the series, Pro Street saw Dave Pierce pick up another victory in his ’03 GTO after winning the spring Throwdown. He was set to face John Gentry and his ’84 Cutlass in the final round, but Gentry wasn’t able to make the call. Still, Pierce raced on to a 4.251 at 165.78 to take the win.

Points leader Alexis Kesterson took the Great Bend Pro Jr. Dragster win, padding her lead over Brody Zimmerman, who she beat in the final round. 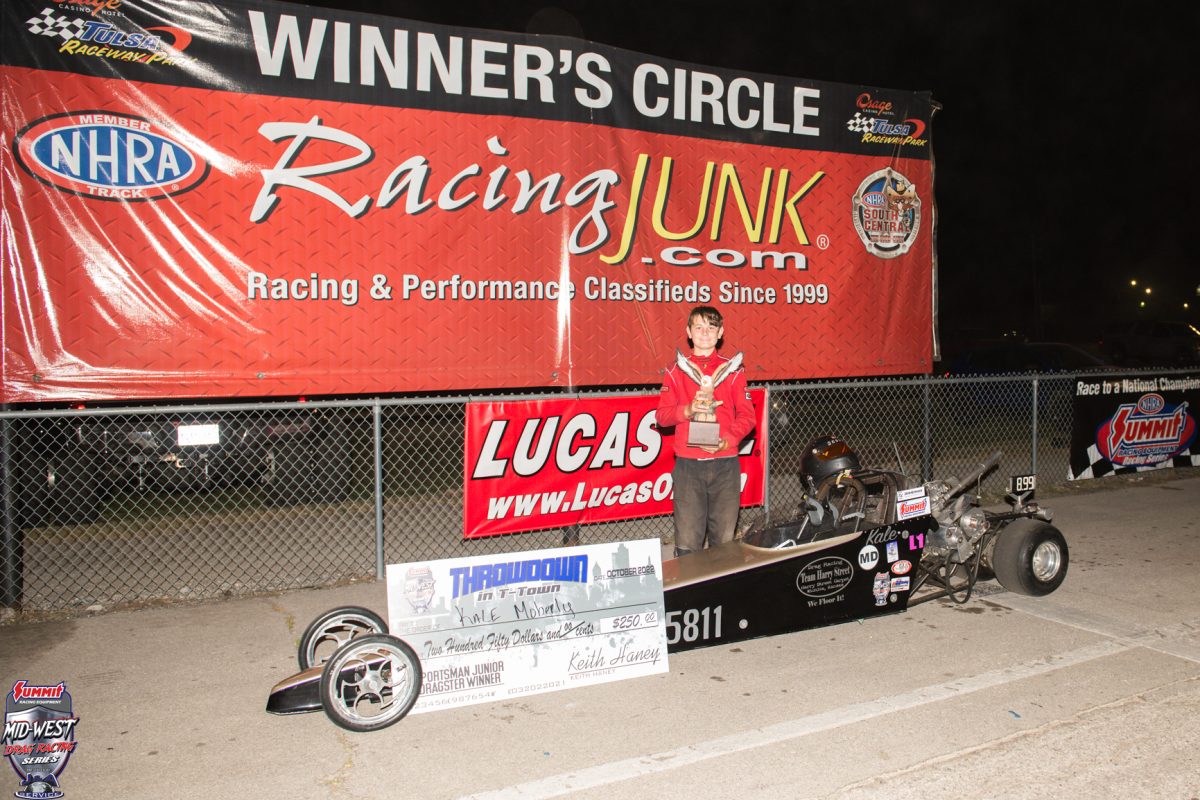 Kale Moberly scored a major Sportsman Jr. Dragster win, defeating Jovee Brundidge in the final round of the Tulsa race. Moberly was better at both ends of the track, leaving first and running a 9.017 on an 8.99 dial-in over Brundidge’s 9.104 on an 8.90 dial-in.

The Wells family had three cars in the final rounds of the Great Bend race. Along with Aaron Wells taking runner-up honors in Pro Mod, the brother-sister duo Tyler and Kenzie Wells faced off in the Sportsman Jr. Dragster final round. Tyler turned on the win light, picking up his second win of the season.

The 2022 MWDRS season will conclude Oct. 21-22 at the Xtreme Texas World Finals at Xtreme Raceway Park in Ferris, Texas.