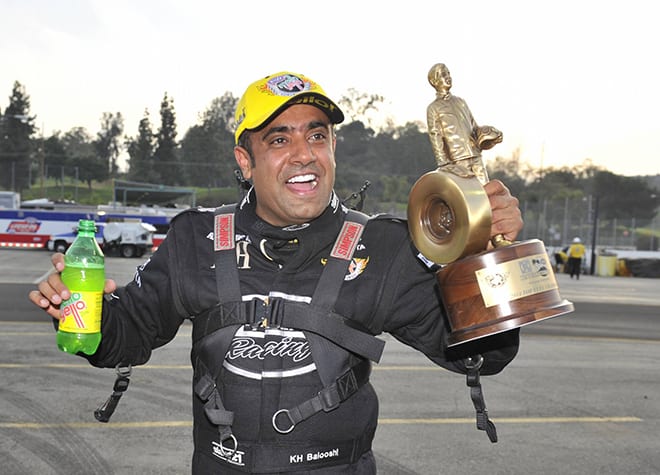 After AJR cut back to one team to start this season, alBalooshi, 36, competed part-time in NHRA Pro Modified where he won the world championship in 2011.

“We’re excited that DSR was able to get a driver with Khalid’s credentials to drive our Sandvik Coromant/Red Fuel dragster in the U.S. Nationals,” Schumacher said.

“Khalid does an outstanding job of representing NHRA drag racing and is a great international ambassador for our sport. He is a proven, versatile racer and showed that by quickly adapting to Top Fuel where he was very successful.

alBalooshi takes over the Sandvik Coromant/Red Fuel seat on the team led by crew chiefs Todd Okuhara and Phil Shuler. The team won this year’s NHRA Gatornationals, the third race of the year.

“I was surprised a bit when I got the call from Don Schumacher, and I am very excited to be able to drive one of the top cars,” alBalooshi said.

“I have been good friends with Phil for a long time and know Todd. It is a very good team.

“We will try our very best and want to make everybody at Don Schumacher Racing happy.”

Schumacher and DSR will have no further comment until Friday’s 10th annual DSR Open House to benefit Riley Hospital for Children at DSR headquarters in Brownsburg, Ind., that is free to the public from 10 a.m. to 3 p.m.