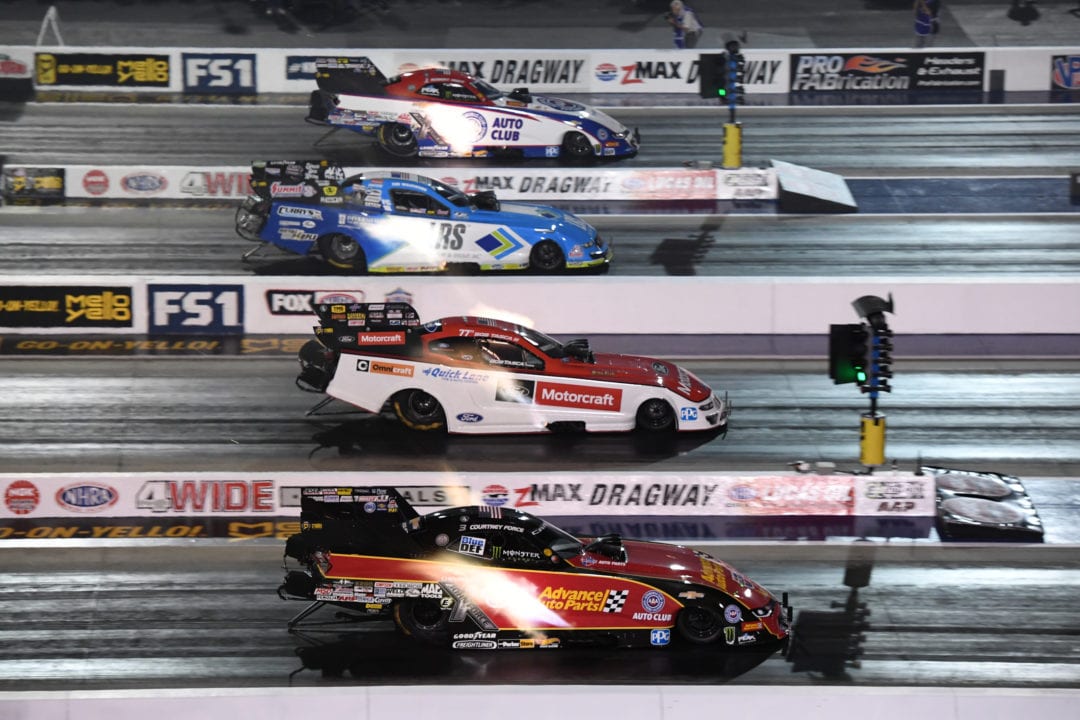 It is the sixth of 24 races during the 2019 NHRA season and marks the 10th anniversary of four-wide drag racing, one of the most unique experiences in all of motorsports. Drag racing’s ultimate thrill ride provides a sensory overload that is unmatched in the sport as four 10,000-horsepower nitro-burning machines power down the dragstrip simultaneously. It has created incredible excitement over the years at the facility known as the “Bellagio of dragstrips,” as fans have turned out in impressive numbers to take in the unforgettable action.

The best in Top Fuel, Funny Car and Pro Stock Motorcycle will compete in the four-lane event and try to earn a Wally at zMAX Dragway. Steve Torrence (Top Fuel), Cruz Pedregon (Funny Car), and Jerry Savoie (Pro Stock Motorcycle) were last year’s winners. The race will be televised on FOX Sports 1, including a broadcast of the finals on Sunday, April 28 at 6:00 p.m. (ET).

Torrence swept both races at zMAX Dragway last year and also won the four-wide race in 2017 as the defending Top Fuel world champion will look to continue his reign of dominance at the state-of-the-art facility. Torrence, who won 11 races in 2018, will look to grab his first win in 2019, but it won’t be easy. The Texan will have to get past points leader Doug Kalitta, who won the opening race in Pomona, and a star-studded field that also includes Leah Pritchett, five-time Charlotte winner Antron Brown, 2017 world champ Brittany Force, Terry McMillen, Clay Millican, Gainesville winner Richie Crampton, Scott Palmer and rookie Austin Prock.

Cruz Pedregon snapped a long winless streak a year ago in Funny Car when he triumphed in the final round at zMAX Dragway. It gave Pedregon his first four-wide victory and second total at the facility but repeating in the loaded class won’t be easy. Robert Hight has been scorching early in 2019, winning two events and earning three No. 1 qualifiers to become the points leader. He has a class-best five wins in Charlotte, including a pair of four-wide wins, but he’ll be pushed by Phoenix winner Matt Hagan, John Force Racing teammate and 16-time world champ John Force, Jack Beckman, Tommy Johnson Jr., 2016 world champ Ron Capps, defending world champion J.R. Todd, Bob Tasca, Tim Wilkerson and Shawn Langdon. 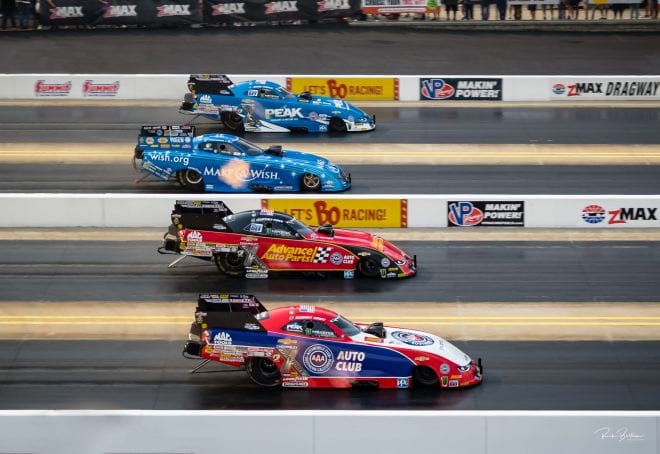 Veteran Jerry Savoie, the 2016 world champion in Pro Stock Motorcycle, grabbed his first four-wide victory a season ago with five-time world champion Andrew Hines finishing as runner-up. Hines started his 2019 season on a strong note with a victory in Gainesville, a welcome sign after going winless in 2018. He’ll look to build on that and earn his third four-wide victory and seventh overall at the track. But Hines, whose six wins at zMAX are the most in NHRA history, will have to deal with the likes of teammates Eddie Krawiec and Angelle Sampey, who have a combined seven world titles, defending world champ Matt Smith, Hector Arana Jr. and Joey Gladstone.

The E3 Spark Plugs NHRA Pro Mod Drag Racing Series presented by J&A Service makes the third of 12 stops in 2019 with its appearance at zMAX Dragway. Jose Gonzalez grabbed his first career win in the popular class last year at the event, while Todd Tutterow claimed the season-opening victory in Gainesville. Fan favorites Erica Enders and Alex Laughlin will be competing in this exciting category as well. 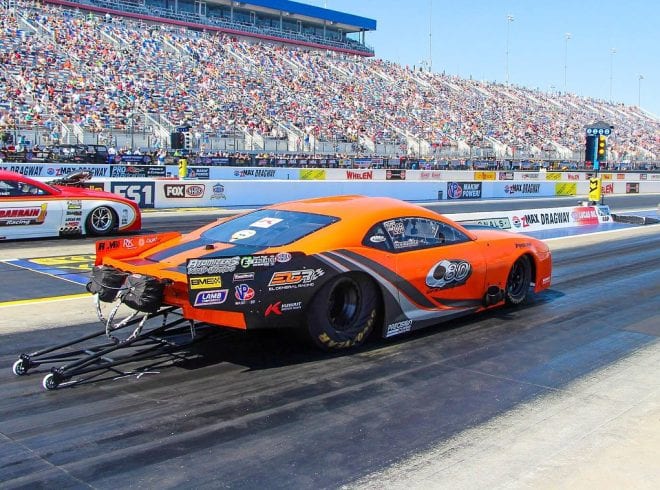 The ultra-competitive SAMTech.edu NHRA Factory Stock Showdown will hit the track for its second appearance of the season. This growing series features production car drag racing at its best. Fans of modern muscle cars will love these quick and unpredictable machines that represent the ultimate in technology and performance.

The second round of qualifying on Friday night will be a special treat for as the NGK Spark Plugs NHRA Four-Wide Nationals go Prime Time! With pyrotechnics, a live DJ, driver intro music and header flames under the lights, this will be an unforgettable experience for race fans.

As always, fans can interact with their favorite drivers as they’re granted an exclusive pit pass to the most powerful and sensory-filled motorsports attraction on the planet. This unique opportunity gives fans direct access to the teams, allowing them to see firsthand the highly-skilled mechanics service their hot rods between rounds, and get autographs from their favorite NHRA drivers.

To purchase reserved seats for the NGK Spark Plugs NHRA Four-Wide Nationals, please visit www.zMAXDragway.com or call the box office at (800) 455-FANS (3267). Tickets for children 13 and under are free with any paid adult ticket. To honor the Salute to First Responders, military and first responders can save 20 percent on tickets. For more information about NHRA, please visit www.NHRA.com.