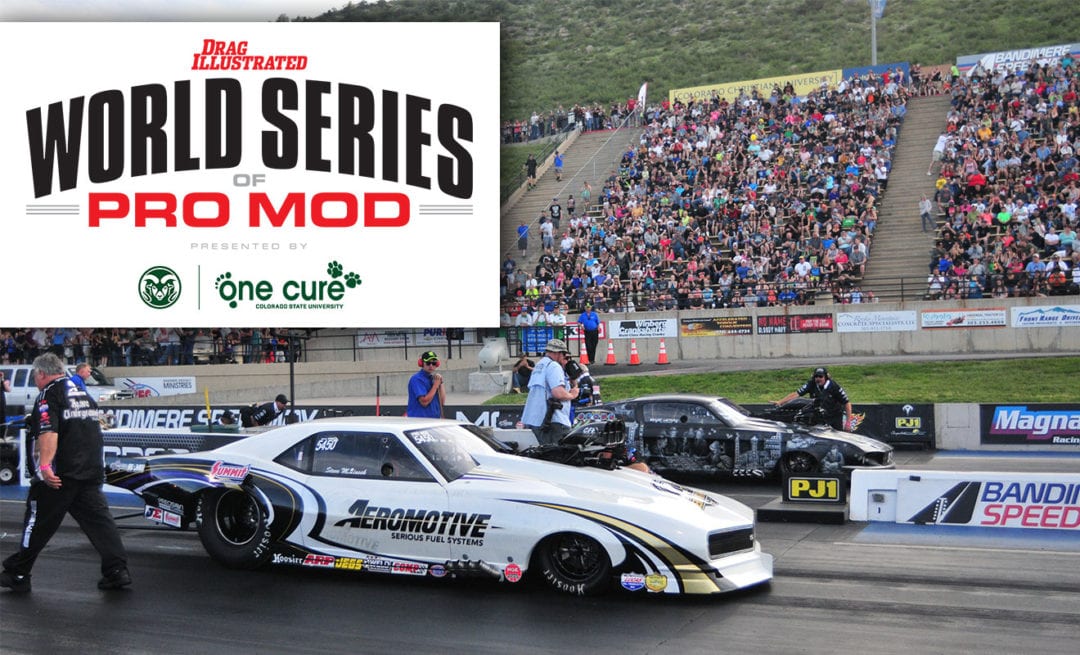 Drag Illustrated Media announced yesterday it will venture into the world of race promotion this summer. The Drag Illustrated World Series of Pro Mod, August 4-5, 2017, will feature the best drivers and teams that legal Pro Modified racing has to offer. The first-of-its-kind, $100,000-to-win, winner-take-all event will be held at Bandimere Speedway near Denver, Colorado.

“Putting on races has been a part of the Drag Illustrated plan since the very beginning,” said Drag Illustrated Editor-in-Chief Wes Buck. “We’ve spent the last 11 years building the Drag Illustrated brand, telling the stories of racers from all walks of life as they progress through their respective racing careers, and now it’s time to be part of some of those stories.

“We feel the time is right to disrupt the industry; to try something fresh and new,” continued Buck. “Thankfully, Sporty Bandimere and the whole crew at Bandimere Speedway share our vision and belief in Pro Modified drag racing, and are equally excited to be a part of what is sure to be the biggest, richest and most talked about doorslammer race in history.”

While the full line-up of drivers has yet to be determined, a host of Real Pro Mod Association (RPM) frontrunners have already signed on to converge on Bandimere Speedway’s picturesque mountainside facility for the one-of-a-kind Pro Mod tournament. Fourteen drivers will be cordially invited to participate in the WSOPM main event. A 15th driver will be voted in via fan vote online. A 16th “wild card” entrant will race their way into the main event during an open 16-car, $10,000-to-win Pro Mod shootout on Friday night.

“It is my belief that Pro Mod is home to some of the most interesting, exciting and outspoken people in drag racing,” said Buck. “Not only do they run these cars on the absolute ragged edge, but they’re largely self-made men who have the autonomy to speak their minds and inject a little color and energy into the storyline – and that’s what drag racing needs right now. We need a great story to tell, and I believe the World Series of Pro Mod, featuring the biggest names in doorslammer racing, converging on a legendary facility in a part of the country largely unfamiliar to Pro Mod racers with $100,000 on the line is a great story. This is going to be huge.”

The race is also unique in that the pairings for the first round of eliminations will be randomly drawn during Buck’s popular, weekly live drag racing talk show on Facebook approximately one month before the World Series of Pro Mod. The 16 drivers will have the opportunity to make three clocks-off shakedown runs before eliminations.

“The World Series of Pro Mod is a concept I’ve been kicking around for several years,” said Buck. “Personally, I’ve always felt like the traditional drag racing format – a qualified field followed by a 16- or 32-car eliminator – never really offers promoters the necessary time to generate buzz and build interest in a race. In drag racing, we don’t know the cast of characters involved until the day of, and we certainly don’t know who’s going to qualify where or who is going to be in the final. It’s why there are two weeks between the end of the NFL playoffs and the Super Bowl – you need time to tell the story.

“By making it an invite-only deal, by essentially ‘casting’ our field with colorful, energetic and competitive drivers, then drawing the first-round pairings a month ahead of time, we can build rivalries and develop a compelling story around the race. There is absolutely zero make-believe here. There’s no staged antics or staged outcome. We do, however, want to pour as much gasoline on this fire as is possible, lean on racers who share our vision for changing the trajectory of drag racing and taking this sport to the next level, and we believe the World Series of Pro Mod is where it begins.”

Drag Illustrated will make several announcements in the coming months to reveal the invited drivers as well as additional details. For more information on the Drag Illustrated World Series of Pro Mod, please visit www.WorldSeriesofProMod.com.