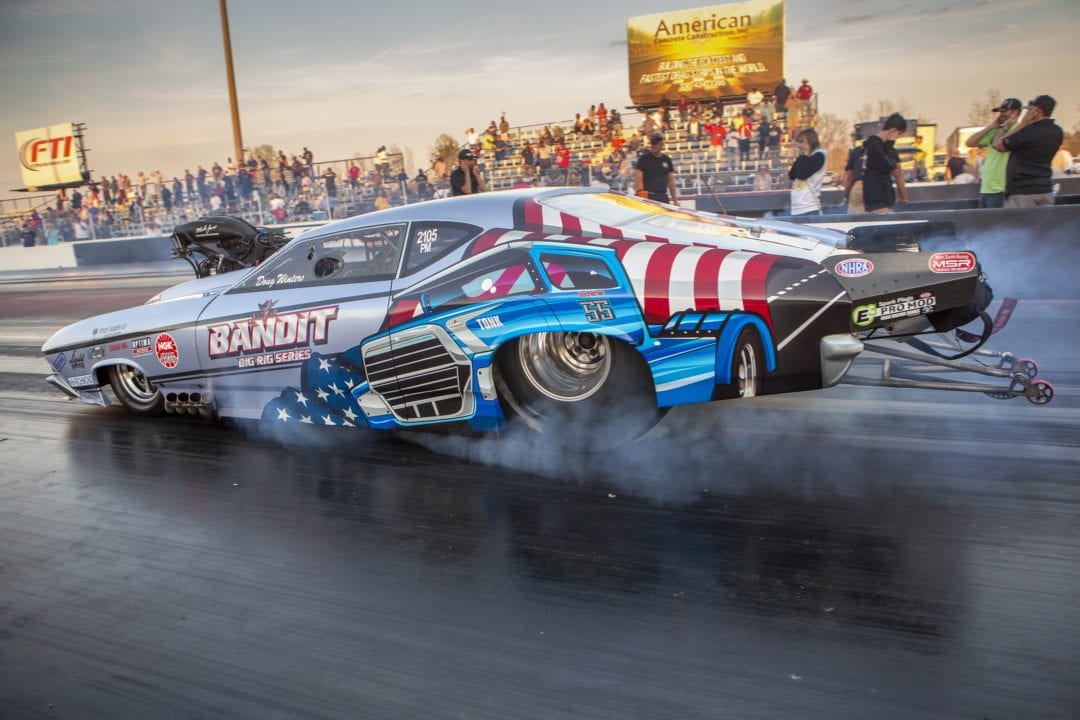 With a full NHRA Pro Mod schedule, Doug Winters doesn’t get to do much racing outside of those 12 races. But when the opportunity came to race at Darlington Dragway with a host of big names at the season-opening race for the Carolina Xtreme Pro Mod series, Winters couldn’t pass it up.

What started as a test session turned into a major moment for Winters, as he powered his Bandit Big Rig Series ‘69 Chevelle past Rickie Smith in the final round with a 3.760 at 197.28 mph.

“It was very exciting to get a win with that level of competition,” Winters said. “There were some legends, some PDRA racers, some NHRA racers, so it was pretty special. The series is doing a lot of stuff to get good field and Darlington is just a great venue. It was a really good weekend.”

It was the final highlight in a satisfying weekend for Winters, who thoroughly enjoyed competing alongside the likes of Smith, Charles Carpenter, Jeremy Ray, Jay Cox, Chris Rini and Tommy Mauney at the first of five races during the 2019 Carolina Xtreme Pro Mod season.

With 22 total entries for the one-day Pee Dee Fleet Winter Nationals, it went down as a massive success for the series, which came returned with noticeable energy and interest after taking 2018 off.

The series provided free testing on Friday and jumped into two rounds of qualifying on Saturday before moving into eliminations. The entire event was finished by 10 p.m. and with strong participation from both racers and fans, co-founders Nathan Vanbeek and Tony Wilson called it a rousing success.

“I think it went better than we could have ever expected,” Wilson said. “It turned out to be a near-perfect weekend as far as racers and spectators, and just the race in general. We had a lot of fans there, the caliber of racers was fantastic, and it was really good to kick it back off with a race like that. I think we’re really going to feed off this.”

After just missing out on qualifying in the record-setting NHRA Pro Mod field in Gainesville, Winters simply hoped to use the weekend in Darlington to get his front-half numbers in check at the 1/8-mile race.

That meant trying to run in the mid-3.70s in Darlington and that’s exactly what happened all weekend. Winters ran 3.78 on both qualifying passes, improving to 3.76 in the opening round. He stayed there throughout eliminations, going 3.76 with a .006 reaction time to slip past Rini in the semifinals.

In the finals, Winters left on Smith and put together another 3.76 to cap off a consistent and highly-rewarding weekend.

“Right off the bat on Friday we hit a combination that got us close to where we wanted to be,” Winters said. “Running those repeatable numbers, that was pretty cool. We always like running Rickie and to beat him off the line and run quicker that was doubly sweet. This does a lot for our team and we’re hoping this is the start of good things to come.”

Winters estimates the 3.76 runs would put a quarter-mile pass around 5.74, which is where the veteran hopes he can be next weekend at the NHRA Pro Mod race in Houston. It’s a step in the right direction and with the early points lead in the Carolina Xtreme Pro Mod series, he may find himself at their next four races as well.

“We would like to try to do it,” Winters said. “It’s doable to run some other events and try to win the points championship. This was pretty cool and hopefully we can keep this going.”

Vanbeek is eager to keep the momentum going for the series after a top-notch debut in Darlington. The next race – the Precision Racing Suspension and Residential Concrete Services Spring Nationals – takes place April 20 at Union County Dragway and ATI is sponsoring Friday’s free test session.

Along with Winter’s win, there were plenty of highlights, too, including Cox running 3.692 at 202.98, putting the series on a good track heading into the rest of its season, which includes another stop at Darlington in late May.

“The whole event ran smooth, and the quality of racers and quality of racing was pretty spectacular,” Vanbeek said. “Darlington did an awesome job, and one of the biggest comments I heard from racers was they all enjoyed it was a one-day show. Having a free test session for anyone who purchases a tech card seemed to go over well and the event was definitely as successful as it could have been.”