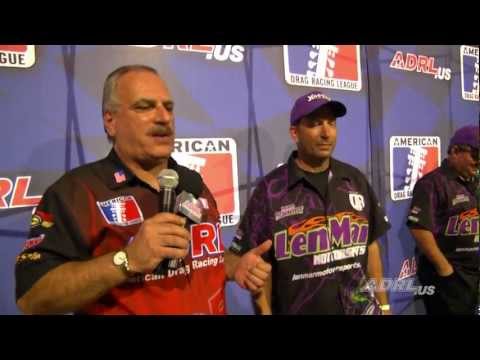 Akin to the Battle of Antietam, Doug Riesterer’s single-day domination of the American Drag Racing League’s Gateway Drags IV in St. Louis, Missouri, was as brutal of a performance as has been seen in the outlaw eighth-mile series since its inception. Choosing to help his school teacher wife move her classroom, Riesterer missed the first day of qualifying in St. Louis on Friday, but after a quick peak at the qualifying sheets online, which showed a short field in Pro Nitrous, he and his pals loaded up and headed north. Roughly 17 hours later they arrived at Gateway Motorsports Park where they promptly unloaded their ’68 Camaro, warmed it up, and headed to the lanes for the final round of qualifying on Saturday morning. Riesterer took a shot in the dark and qualified 7th with a 3.872/185.31mph pass. From there he waded through some of the best the ADRL Pro Nitrous division has to offer en route to victory, and thanks to the video above from ADRLTV you can witness the whole thing.