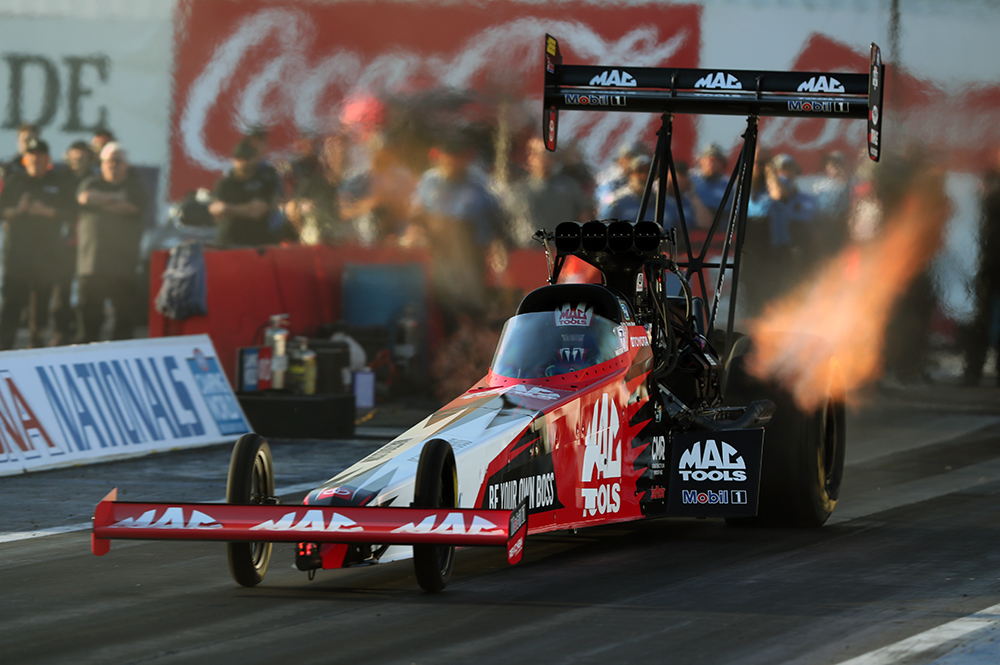 In the history of the Gatornationals only six racers have stood in the winner’s circle three or more times. Top Fuel veteran Doug Kalitta is on that list, but this weekend the driver of the Mac Tools Top Fuel dragster would like to join and even more exclusive list as one of only four drivers with four wins at the fabled race Florida race track. The current group of four-time winners includes Hall of Famers Joe Amato, Larry Dixon and Don Garlits. Kalitta collected wins in 2000, 2005 and 2014 at the Gatornationals and the 49-time winner will be looking to add another prestigious victory to his list of accolades.

“Any time you win the Gatornationals it is a huge deal,” said Kalitta. “There is so much history there. This is where the first 300 mile per hour run was made by Kenny Bernstein. You look at the legends that have won here and the list is long. To get a fourth win here would be really special.”

The Mac Tools team will bring performance momentum to the Gatornationals on the heels of their 51st No. 1 qualifying effort two weeks ago at the NHRA Arizona Nationals. Kalitta clocked the quickest run of his career on Friday night of qualifying with a blistering 3.657 second run.

“That 3.65 was a great run and we made some more over the weekend,” said Kalitta. “I have a lot of confidence in (crew chiefs) Alan Johnson and Brian Husen. I know we are on the right track.”

This race weekend will also be the opportunity for Kalitta pick up a win during the Pep Boys Allstar Callout specialty race. By virtue of his No. 1 qualifying effort in Phoenix Kalitta catapulted into the No. 7 qualifier position in the eight-car field racing for a $130,000 total purse with the race winner getting $80,000.

“The Pep Boys race will be exciting for sure,” said Kalitta. “All eight of these cars are tough and the callout element should make it a lot of fun. I am glad Shawn (Langdon) and I have a shot at that $80,000.”

Friday qualifying will begin at 5:30 p.m. and on Saturday there will be two rounds of qualifying on Saturday. The Pep Boys Allstar Callout race will be run in conjunction with qualifying with the two finalists racing for the $80,000 at the end of the day on FOX national broadcast. Final eliminations for the Gatornationals will be contested on Sunday beginning at 11 a.m.