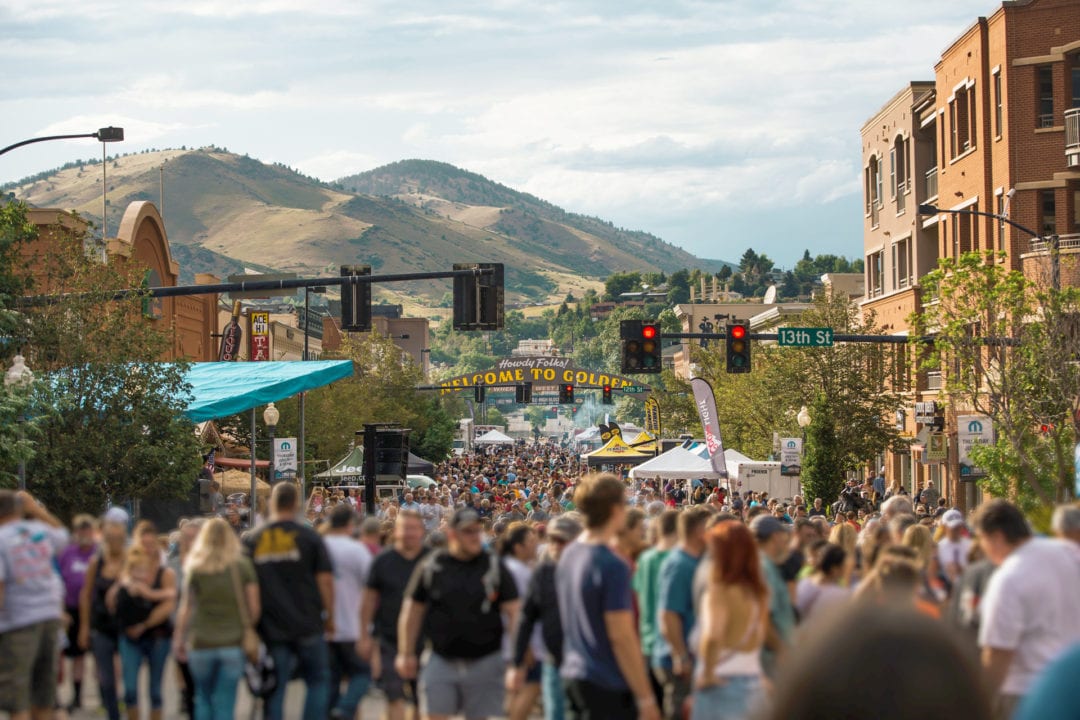 The Dodge Mile-High NHRA Nationals Powered by Mopar is rumbling into Bandimere Speedway near Denver on July 20-22, and the Dodge//SRT brand is marking its first year as title sponsor at Bandimere Speedway. The weekend will feature the reveal of two new race vehicles, the kickoff of a fan contest featuring the popular Dodge Challenger SRT Demon simulators and much, much more.

The Dodge//SRT brand’s involvement in 2018 also marks a three-decade milestone: it follows 29 years of title support by current presenting sponsor Mopar, making this the 30th consecutive season of FCA US event title sponsorship at Bandimere, which is also celebrating its 60th anniversary.

The action at the Dodge Mile-High NHRA Nationals Powered by Mopar will begin on Thursday, July 19, with the unveiling of two new Dodge//SRT and Mopar race vehicles at a pre-race press conference near Denver. The vehicles will be on display to the public for the first time later that night in downtown Golden, Colorado, at the Mopar Big Block Party Presented by Pennzoil.

“The Dodge//SRT brand has been setting records and winning drag racing championships going back to the 1960s. Our sponsorship of the Dodge Mile-High NHRA Nationals is a natural fit that connects us with our passionate fan base and allows us to carry on the 30-year tradition of FCA US support at Bandimere Speedway,” said Steve Beahm, Head of Passenger Cars, Dodge//SRT, Chrysler and FIAT, FCA North America. “The Dodge Mile-High NHRA Nationals Powered by Mopar is just the latest example of the Dodge//SRT brand’s commitment to the NHRA, and our growing involvement in the series allows us to further connect with grassroots racers and car enthusiasts who share our love of performance on the street and at the drag strip.” 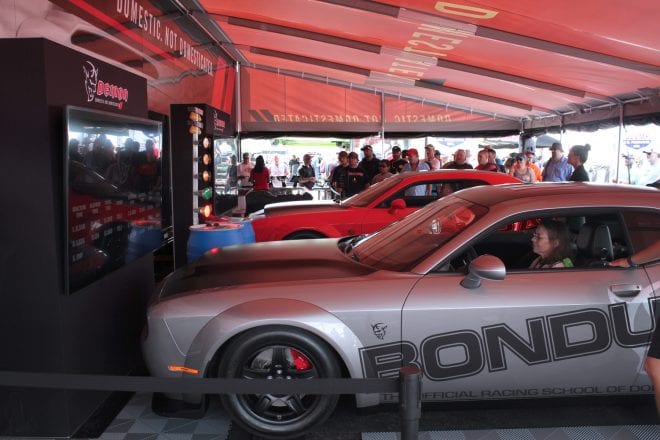 Dodge//SRT is inviting enthusiasts and NHRA race fans to participate in the “Drag Strip Showdown,” a head-to-head competition in Dodge Challenger SRT Demon simulators where the top four drivers with the best race times will win a trip to the Dodge//SRT Bondurant Drag Racing School near Phoenix. Winners will be paired up and coached by either Mopar Dodge Top Fuel racer Leah Pritchett or Mopar Dodge Charger Funny Car driver Matt Hagan for a final competition that will take place at Bondurant in the actual 840-horsepower Dodge Challenger SRT Demon vehicle – the most powerful muscle car ever.

The “Drag Strip Showdown” kicks off during the Mopar Big Block Party Presented by Pennzoil on Thursday, July 19, in downtown Golden, Colorado, continues during the Dodge Mile-High NHRA Nationals Powered by Mopar and will run through November 11 at Dodge-sponsored NHRA races throughout the country, as well as at the August 11 Motor Trend Group’s “Roadkill Nights Powered by Dodge” popular street drag racing and car festival on historic Woodward Avenue in Pontiac, Mich., and the October 30-November 2 Specialty Equipment Market Association (SEMA) show in Las Vegas.

Enthusiasts have another opportunity to attend the Dodge//SRT Bondurant Drag Racing School by entering the “Drag Strip Showdown” sweepstakes component of the promotion at Dodge Garage when the promotion begins July 19. Two additional winners will be randomly selected to receive gift certificates to the school at a date of their choosing.

Hagan enters Denver on a hot streak with back-to-back wins and sits second in the Funny Car standings, while Top Fuel’s Pritchett, runner-up last year at Bandimere, is perched at fourth in the standings with one win on the season. Both are seeking their first Wally trophies at the venue, while their DSR teammates Jack Beckman and Tony Schumacher will look to bulk up their existing win totals. Beckman holds three Funny Car trophies in Denver in his Infinite Hero Dodge, while Tony Schumacher has also claimed three Wallys in the Top Fuel class.

Hagan and Pritchett will also resume their series of grudge match races in Dodge Challenger SRT Demon vehicles, which began last year at Bandimere Speedway. The pair will square off in between qualifying rounds on Friday and Saturday. Last year, Pritchett was a perfect 2-0 at Denver in her Demon against Hagan.

For the 17th consecutive year, the Mopar Big Block Party Presented by Pennzoil, scheduled for Thursday, July 19, from 6 to 10 p.m. MT, will serve as the “Official Starter” of the Dodge Mile-High NHRA Nationals Powered by Mopar race weekend.

The popular free-admission event, held on the streets of downtown Golden, Colorado, provides race fans the opportunity to meet their favorite Mopar Dodge Pennzoil NHRA drag racing stars in an hour-long autograph session. Attendees can experience virtual “rides” down the drag strip in Dodge Challenger SRT Demon simulators and virtual spins in simulators located in the Pennzoil display, hear live music from the Steve Thomas Band and visit a variety of food, drink and merchandise tents.

Mopar and Dodge race and classic muscle cars will be on display, as well as Mopar-customized all-new Jeep Wrangler and Ram 1500 vehicles. Fans can enter to win $45,000 toward the purchase of any new FCA vehicle and can share photos from the event on social media by using #MoparBP18 or #MoParty. Popular Denver-area morning show host and Mopar fan Willie B. from KBPI 106.7 FM will serve as the event emcee. For complete information on the Mopar Big Block Party Presented by Pennzoil, visit www.milehighblockparty.com.

Grand Marshal Davis served as an artillery man in the U.S. Army during the Vietnam War and was wounded in 1967 during a harrowing firefight while setting up a forward support base. Despite his injuries, Davis continued to battle against advancing enemy forces. Hearing cries from three wounded GIs cutoff from his group, Davis bravely navigated across a river on an air mattress to rescue his compatriots. In 1968, Davis received the Medal of Honor from President Lyndon Johnson for his actions; years later, footage of Johnson putting the medal around Davis’s neck was used in the film Forrest Gump, with Davis’ head replaced by that of actor Tom Hanks via movie magic.

Honorary Starter and Ret. Army Sgt. Neil Duncan has climbed some of the highest mountains in the world —figuratively and literally. Leading a team of elite paratroopers deployed to southern Afghanistan in 2005, Duncan was gravely wounded by an IED. Despite losing both his legs, Duncan was soon up and running on high-tech prosthetic legs, and after intensive training began a series of mountain-climbing challenges. In June 2010, Duncan and two other veteran amputees climbed 19,340-foot Mt. Kilimanjaro, the tallest peak on the African continent, and he later climbed the tallest peak in South America, Mt. Aconcagua in Argentina, at 23,000 feet. Duncan also currently serves several veteran support organizations, including as part of the grant committee for the Infinite Hero Foundation.

The Dodge Mile-High NHRA Nationals Powered by Mopar is scheduled for July 20-22 at Bandimere Speedway, with qualifying scheduled for Friday and Saturday, and elimination rounds on Sunday. Qualifying coverage will air live on Fox Sports 1 (FS1) from 7:30 p.m. to 10 p.m. on Saturday, July 21. Three hours of eliminations coverage will air live on the national Fox Network starting at 3 p.m. ET on Sunday, July 22.