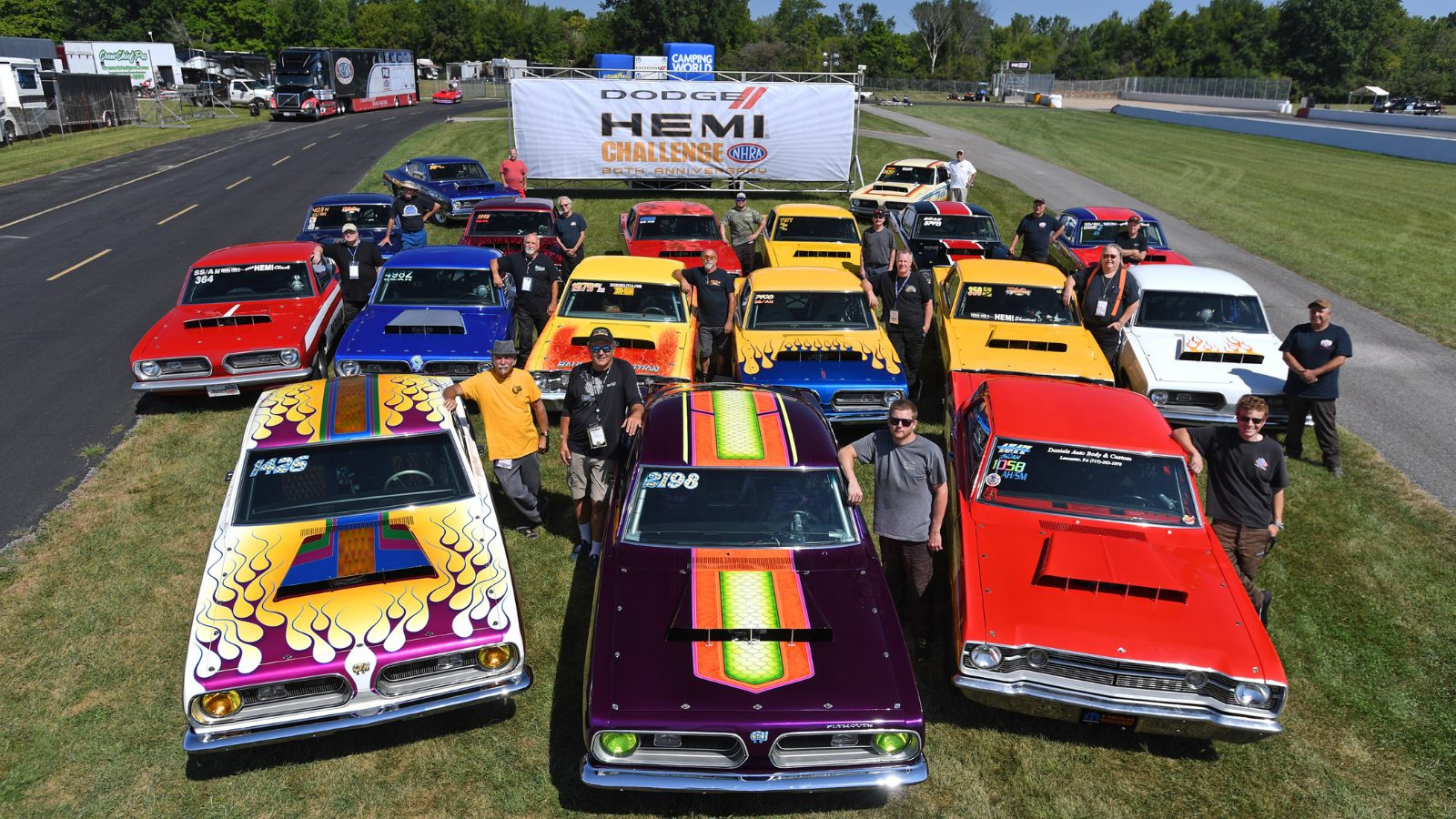 Paul Rossi, renowned Mopar drag racer, engine builder, development engineer, team owner and innovator, has been named grand marshal as acknowledgement of his contributions in the 1970s, ‘80s and ‘90s to the development of high-performance products in the Dodge family, which includes building and driving a 1970 Challenger R/T powered by a 440 Six Pack, backed by Direct Connection when the performance brand first launched in 1974, that dominated the Super Stock class for years. Rossi is excited to be called up to lead the parade of iconic HEMI muscle cars along Indianapolis’ fabled return road for this year’s event.

“I’m so honored to be called upon as grand marshal,” said Rossi, who campaigned one of the original Hurst-built ’68 HEMI (B029) Barracuda Super Stock cars. “I completely understand the appeal of the Dodge HEMI Challenge. There’s nostalgia there and fans like to see them going fast. It’s just fantastic to have a category that calls these classic muscle cars back out of the garage. I really love that.

“I had an original HEMI ‘Cuda and took it to the Super Stock (SS/AA) 1975 NHRA World Finals (Ontario, California) and while I finished runner-up, I was the last standing Mopar and fastest HEMI in the country. I guess I’m now the face of the Direct Connection old guard. I’m happy to see the brand continue with this new generation of clean performance and happy to have Dodge still value their history with the HEMI Challenge and continue to build their legend at the event. My first U.S. Nationals was in 1963 aboard a brand new Plymouth Ramcharger A/FX (Factory Experimental class similar to the Factory Stock Showdown), the first Mopar to enter the class, and coming here to Indy was just the biggest thrill. As a competitor or a fan, it still has that appeal.”

The racing legend, who in addition to his many successes in NHRA also won multiple IMSA championships and Pike’s Peak endurance races, will join Direct Connection spokesperson Chuck Spieser for a question-and-answer session with performance enthusiasts on Saturday, Sept. 3, at 3:30 p.m. at the Dodge//SRT and Mopar exhibit in the NHRA’s Manufacturers’ Midway.

More than 20 entrants are expected to vie for the new trophy and bragging rights this year. Among them will be defending winner Steve Comella who had a dominant performance in his HEMI Barracuda driving from No.1 qualifier to the winner’s circle as a follow up to his runner-up finish in 2020. Four-time Dodge HEMI Challenge winner Jim Daniels Jr. (2016-2019) will also be back to compete aboard his vintage HEMI-powered ’68 Dodge Dart after finishing runner-up to Comella in last year’s close and exciting final elimination battle.

A number of the legendary staples competing in the long-standing event include the winner of the first Dodge HEMI Challenge, Bucky Hess II (2001), aboard his ‘68 Plymouth Barracuda, Jim Pancake and his ‘68 Dodge Dart, and Joe Teuton at the wheel of his ’68 ‘Cuda.

The Dodge HEMI Challenge will be streamed live on NHRA.TV with subscription-based video-on-demand coverage of qualifying on Thursday, Sept. 1, and elimination rounds on Friday, Sept. 2, with highlights of the parade and final eliminations expected to be part of the FS1 qualifying show on Sunday, Sept. 4, from 1 to 3 p.m. ET.