The National Hot Rod Association (NHRA) Camping World Series is gearing up for its cornerstone event, the 67th edition of the Dodge//SRT U.S. Nationals, with drag racers from across the country and various parts of the world getting ready to hit the staging lanes at Lucas Oil Raceway near Indianapolis, Indiana, September 1-5.

At the season start, Dodge and SRT (Street and Racing Technology) performance brands announced an expansion of their support for the series with the addition of the oldest and most prestigious of drag-racing events to their portfolio of event title sponsorships with a multiyear deal.

“As the new title sponsor of the 67th NHRA U.S. Nationals, Dodge//SRT is showing off its passion for performance to America’s motorsports enthusiasts,” said Tim Kuniskis, Dodge Brand Chief Executive Officer – Stellantis. “The Dodge//SRT NHRA U.S. Nationals is drag racing’s marquee event. In these cars, these drivers and these fans, you’ll find the heart of the Dodge brand and our Brotherhood of Muscle. Dodge’s performance history is closely tied to this sport and you’ll find a long list of successful Dodge race cars that have competed here over the years. Our teams are ready to write another winning chapter in this event’s storied history.”

While attending the event affectionately known as the “Big Go” is an assured bucket-list item for any passionate motorsports enthusiast, competing at the Dodge//SRT NHRA U.S. Nationals remains a priority item for serious drag racers in any category. Standing proudly upon its tallest pedestal with a Wally trophy in hand remains a coveted addition to every drag racer’s list of career accomplishments.

“It’s the biggest race of our season and the thing about Indy is you want to win it,” said three-time and defending NHRA Funny Car world champion Matt Hagan, who powered his Don Schumacher Racing (DSR) Mopar Dodge Charger SRT Hellcat Redeye Funny Car from No. 1 qualifier position to the winner’s circle at Indianapolis in 2016. “I’ve been blessed to win it, but there are a lot of great drivers that haven’t won it. But you always want another one. I’m greedy. You want to go out there and battle and put another (Wally trophy) on the shelf.”

As Hagan gets set to compete in his 14th Dodge//SRT NHRA U.S. Nationals, he’ll take the red, black and chrome “demon-possessed” Dodge Charger SRT Hellcat Redeye to the staging lanes for the final regular season event as the current Funny Car points leader and the tour’s most recent winner. With wins in two of the last five events — the Lucas Oil Nationals in Brainerd, Minnesota, and the Dodge//SRT Mile High Nationals in Denver, Colorado — Hagan has put himself in prime position for the Countdown to the Championship playoff series.

“I’m feeling super confident in our guys,” added Hagan. “They’re busting their butts and turning the car around in 30 minutes. Car Chief Alex Conaway, Assistant Crew Chief Mike Knudsen and Crew Chief Dickie Venables are doing a great job with our Mopar Dodge Charger SRT Hellcat Redeye. I’m trying to do my job, starting and leaving on time, and I think it’s starting to click and it will come together. It’s going to be amazing.”

After a one-year hiatus, the NHRA returns to using the unique points-and-a-half format for this final race of the regular season, providing drivers one last chance to jostle for positions before the points are reset and the field tightened heading into the playoffs, which begin the following week at the Mopar Express Lane Nationals Presented by Pennzoil near Reading, Pennsylvania.

DSR teammate Ron Capps is also in the mix of the championship hunt, sitting in fifth place with a win last month in Pomona, California, and less than a round from the points lead. His focus is firmly on the task at hand, the 27-year Funny Car veteran has never won the coveted Wally trophy at the “Big Go.”

Capps came close in 2017, driving his DSR NAPA AUTO PARTS Dodge Charger SRT Hellcat to a runner-up finish. While he captured an event win on the Indianapolis track last summer for the Dodge Indy Nationals, one of three events held at the track due to an adapted pandemic schedule, he is intent on chasing that elusive Dodge//SRT U.S. Nationals win.

The third member of the Dodge Funny Car stable of drivers looking to get in four rounds of racing with his Snap-on Tools Dodge Charger SRT Hellcat on Labor Day weekend is three-time winner Cruz Pedregon. The Cruz Pedregon Racing team has been coming on strong this season with consistent performances that have earned a win (Norwalk), a runner-up finish and an eighth-place spot in the current Funny Car season point standings. 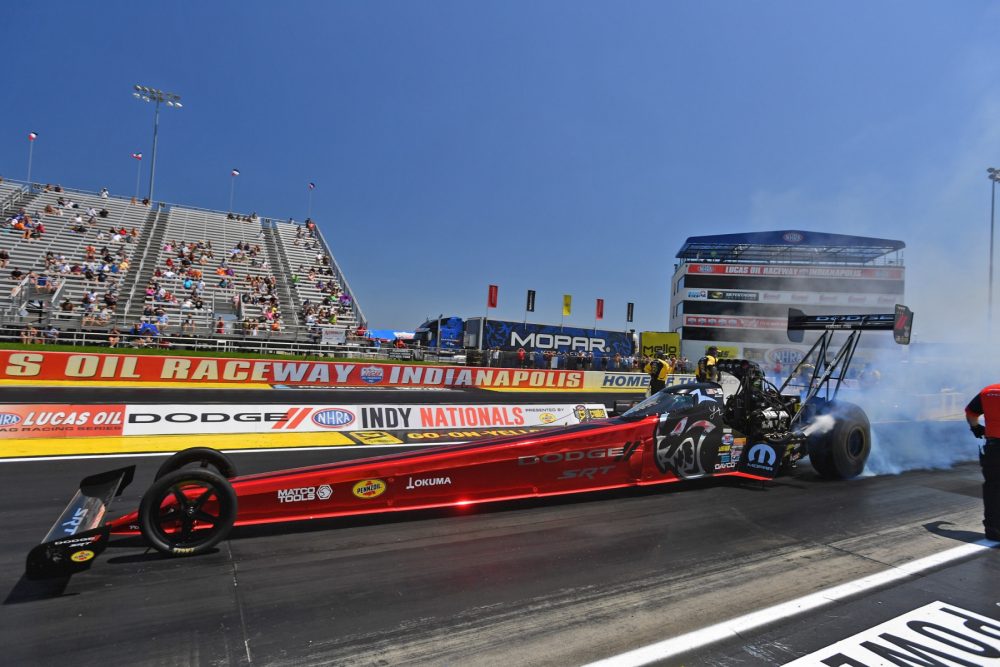 DSR Top Fuel driver Leah Pruett piloted her Dodge Charger SRT Hellcat Redeye dragster to a runner-up finish in her first career final elimination round at the world’s most famous drag race last year. While focused on turning that into a win this year, Pruett has a specific idea of what the ultimate prize is for her.

“I always conceptualize winning Indy as a ‘snow globe.’ We all see what it looks like from the outside, yet want to be inside,” said Pruett. “We’ve heard stories of how magical it is inside that globe from those that have visited by way of a win, and see the prestige that goes with it. Some call this place the winners circle but for this Dodge team it is our globe. The more years I race Indy, the less I become infatuated with having a name tied to the prestigious race win and more obsessed with our journey, memories and character building through the challenges of obtaining such a goal.”

Pruett will take on the added challenge at the “Big Go” of again competing in both the Top Fuel category and Constant Aviation Factory Stock Showdown (FSS), the eight-race series showcasing Detroit’s finest drag-racing ready, factory-built vehicles. That presents Pruett with the opportunity to double-up on trophy hardware and add her own iconic moment to the legendary event aboard her 2021 Dodge Challenger Mopar Drag Pak, but she knows that the ride is what makes that destination even sweeter.

“My perspective may be somewhat unconventional, but it is because I was fortunate enough to experience the Indy ‘snow globe’ of prestige when the Mopar Drag Pak (FSS) team won the U.S. Nationals in 2018. Some of my highest ranked memories are of that win because it was tough and ultimately the pinnacle of races to accomplish a win.”

Pruett will be joined by teammates Mark Pawuk and David Davies as DSR campaigns three Mopar Drag Pak entries at this year’s event to battle among a large 30-plus-car qualifying field.

“Our ability to rise and gain momentum when needed is what excites me about the upcoming Dodge//SRT U.S. Nationals,” added Pruett. “The continued support of Dodge across all levels of the NHRA speaks volumes and we plan to make the loudest roar at their biggest race. A Top Fuel and Factory Stock Showdown win on the same day, although elusive, is not impossible. The momentum with the new Mopar Drag Pak has been promising, as seen by our recent results of back-to-back finals, current point standings and the relentlessness of the team to keep the Mopar flag flying strong and high.”

While the new-generation Mopar Drag Pak is showcased in FSS, the racing heritage of Mopar and Dodge will be on display as the ever-popular Dodge HEMI® Challenge returns to the U.S. Nationals for its 20th anniversary. The longest running, continuous, specialty race in NHRA history features heads-up, wheel standing, and side-by-side racing of vintage HEMI-powered 1968 Dodge Dart and Plymouth Barracuda “package cars” that have dominated the NHRA Super Stock (SS/AH) class for more than five decades.

Fans who can’t make it to the Lucas Oil Raceway to watch all the action can tune in online via NHRA.TV and its subscription-based, video-on-demand coverage of live racing action throughout the weekend.