In the new Precision Turbo & Engine Pro Turbo class, after becoming the first turbo driver in drag racing history to reach the 3.70s earlier in the day, Eric Dillard (above, second from right) topped it with an official double-world-record 3.786 at 210.64 mph in the semifinals and then finished off the dream weekend with a win in the final, running 3.812 at 210.37 mph to beat Todd Moyer on a weekend he and the X-DRL won’t ever forget.

Dillard, driving the Jerry Bickel Race Cars Camaro owned by turbo standout Jose Gonzalez, was brilliant all weekend, reaching the 3.70s with a pass of 3.79 during the final qualifying session on Sunday.

“It was like winning twice in one weekend. We’ve been looking for that 3.70 run for so long and to get the win on top of it, it’s just huge for us,” Dillard said.

“It’s a great way to start the season and there’s so much more we can do going forward. I feel like we’ve got a lot of room to grow and a lot to look forward to in the X-DRL.”

The celebrations continued the rest of the day, capped off by a winner’s circle party that included a call to Gonzalez in the Dominican Republic.

“He was ecstatic. You couldn’t have asked for a better weekend. The car was just running smooth all weekend,” Dillard said. 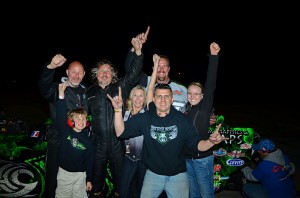 Pesz had his own storybook weekend in Pro X-treme, picking up his first professional win in the class with his Garrett Race Cars ’58 Corvette running a hard-fought 3.769 at 198.88 mph in the final round against Tim Tindle.

“To get your first win like this, it’s just a great feeling. It’s been a long time coming,” Pesz said. “We were running strong at the end of last year and I knew we would be strong this year. It’s great to start out like this, especially at the first event and at your home track.”

Pesz finished as the No. 2 qualifier and then worked hard throughout eliminations, running a 3.75 in the quarterfinals and knocking off Lethal Threat Racing teammate Todd Martin in the semifinals. But nothing came easy on a day where Pesz certainly earned his paycheck.

“The car was all over the track. I really had to drive it today, but it’s fulfilling knowing at the end of the day you really had to earn it,” said Pesz, who thanked Todd and Sheri Martin, LAT Oils, Kryptonite Kustomz and Trick Titanium. 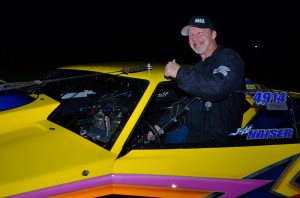 After a number of struggles earlier in the weekend, Naiser came through with clutch performances when he needed them in Pro Nitrous, including a 3.997 at 168 mph in the final against Jim Laurita. It was a welcome sign for Naiser, who hoped to have turned the corner at the X-DRL debut event.

“As much as we’ve been struggling, this is hard to believe and it’s very satisfying,” Naiser said. “It shows the potential this car has and hopefully we’re onto something that’s consistent and fast.”

A round earlier Naiser pulled off the big shocker, ousting No. 1 qualifier Bob Rahaim when the Pro Nitrous world champion shook. Naiser went a weekend-best 3.857 at 192 mph on that run, picking an ideal time to find what he needed to advance.

He had problems late in his final run against Laurita, but did enough to get the all-important victory.

“We got the win and that’s all that counts,” Naiser said. “We just want to savor this win and hopefully we’re on the right track.”

DeFlorian’s dominant weekend in X-treme Pro Stock had a fitting finish, as he went 4.122 at 174.89 mph to beat a red-lighting Scott Hintz.

It’s DeFlorian’s third career win in Pro Stock, and gives him incredible momentum for the rest of the 2013 X-DRL season.

“This is unbelievable stuff. It’s what dreams are made of. I never thought I would have the opportunity to do this,” DeFlorian said. “I have to thank Karen and Kevin Bealko and I’m so grateful for our team. If it wasn’t for all of them, I wouldn’t be here.

“This is tough territory and I knew it would be a challenge. I’m just thankful and very happy.”

In his Black Diamond Motorsports 2012 Camaro built by Jerry Haas Race Cars and powered by Sonny’s Racing Engines, DeFlorian caught a break in the semis when Dean Goforth left before the tree was activated. He responded with a solid run in the final against Hintz.

“It was an extremely challenging weekend. We were really fighting the weather, and the wind was blowing so hard you really had to fight the car. When moments like these come around, you just have to savor it,” DeFlorian said.

Stevenson was a step ahead of everyone in X-treme Pro Modified, finishing off his wire-to-wire weekend on top with a 3.907 at 193.60 mph in the final against Kevin Rivenbark.

Stevenson, who termed this season the “2013 No Excuses Tour” in the winner’s circle, qualified in the No. 1 spot with a 3.938 and continued to pick up throughout eliminations on Sunday. His topped it off with a weekend-best run in the finals, earning a thrilling conclusion to a rewarding weekend.

“This is a dream come true. We were the low qualifier, had the top speed and won. It can’t get any better than that,” Stevenson said. “The guys just busted their butts and with Charles (Carpenter) as the crew chief, things are just clicking.

“The car was just running really well. The guys at Reher-Morrison did a great job with the new engines. There’s way more left in it.” 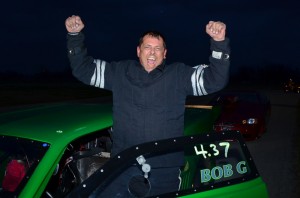 Bob Gulitti became the first-ever winner in Mickey Thompson Top Sportsman, as his 4.40 at 148.76 mph was enough to get past Josh Vettel, who got loose almost immediately.

Gulitti had strong reaction times of .016 and .019 to reach the final, and was consistently in the mid-4.30s to take home the historic win in the class sponsored by Mickey Thompson.

“To win at the inaugural event, it’s just phenomenal. We’ve been looking forward to this since December. We’re on a little roll right now and it feels good,” Gulitti said.

Top Dragster proved to be a huge hit, with 24 cars putting in qualifying passes. In the end, it was Bob Henry who picked up the first X-DRL TD win, going 4.362 at 159.27 mph to pull off the upset against No. 1 qualifier Michael Kile.

Kile picked the worst time for a red light and Henry, who ran as quick as 4.316 in eliminations, gladly took advantage.

“This hasn’t really sunk in yet,” Henry said. “This was a very tough field and we got some breaks, but we kept improving. The track was awesome all weekend and the X-DRL is here to stay. It’s going to keep getting better and better.”

In Pro Junior Dragster, No. 1 qualifier Bethany Crick went 7.86 at 82.89 mph to knock off Kalee Mills in the finals. The next race in the X-DRL’s inaugural 2013 takes place April 26-27 with X-DRL Thunder Valley Madness at historic Bristol Dragway.