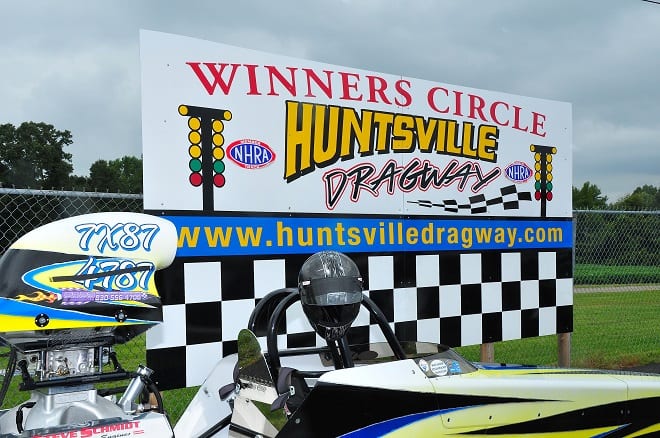 Alabama’s Huntsville Dragway is legendary for offering a jam-packed roster of events throughout any race season and 2015 has certainly been no exception. The NHRA sanctioned, eighth-mile facility located in the town of Harvest, about 20 minutes north of Huntsville, typically begins racing as early as February, with test-n-tune and grudge racing running wide open by March and continuing well into November.

Huntsville has even become a hot bed for big-money bracket races in recent history with several Saturday/Sunday events paying $10K to win each day in the Pro class, as well as $2,500 awarded daily for the Footbrake category. Perhaps most surprising of all, however, is Huntsville’s payout to their youngsters racing in the Junior Dragster category, with a hefty purse of $1,000 up for grabs on Saturday as well as Sunday during the two-day big money events held several times throughout the year.

“We completely guarantee our purses too, so people can feel good about making the trip to race with us,” says William “T.T.” Jones, who along with wife, Angelia, bought the lease to Huntsville Dragway five years ago. Jones has poured his heart and soul into operating the track where he grew up, as did their children. To the Jones family this drag strip represents so much more than just another place to race; it’s a family tradition that they take much pride in operating. “I’ve been racing for over 30 years and for me it all started right here at Huntsville,” he explains.

The Jones family is big into motorcycle racing, with practically every member of the family—including Angelia—either riding or turning wrenches on a race bike at some time or other. “I finally had to remind Angelia that we’ve got five kids now and she really needed to hang up her helmet!” laughs T.T. Realizing it was sound advice, Angelia wholeheartedly agreed and now keeps busy by helping operate the family drag strip.

When T.T. and Angelia bought the Huntsville lease in 2010, they had their work cut out for them with regards to improving every detail of the track. “Things had kinda’ gone downhill here at Huntsville and we’re trying hard to bring it back and I can certainly say that we’ve been real encouraged by the progress thus far,” T.T. says. Among the first projects tackled when the Jones’s first took over were grinding and smoothing the track, and lengthening the shutdown area. Currently, they’re in the process of building new bathrooms. “We’ve used a whole lot of paint, too,” T.T. declares, laughing.

In addition to the big-money bracket events, Huntsville Dragway also offers a regular points bracket series sponsored by local business, Huntsville Engines. Fans of Pro Modified racing have also been greatly entertained this season by such events as Mike Hill’s Hitman Nationals, which included several other classes of competition, too. The Rocket City Nationals is another attraction that visited Huntsville this year and offered Pro Mod, grudge, index classes and X275 throughout a three-day long event. The Rocket City Nationals typically is held three times a year, but this year the first two events experienced rain, while the third was a huge success.

Among the most celebrated events that come to Huntsville, though, are the legendary Radial Fest gatherings each spring and fall. Huntsville has well-documented drag radial roots that were instrumental in the launch of the ORSCA series in the mid-2000s, as well as other facets of the small-tire movement, and crowds still gather in masses for such events.

It also should come as no surprise that the Jones family schedules one of the largest bike races in the country, known as Lucky 7-11 and typically on the last weekend of July at Huntsville, with attendance of up to 15,000 people through the gate.

“There is so much going on here at Huntsville that I always tell people to keep checking our website for the latest news and events schedule,” T.T. says, adding that his family is focused on constantly trying to improve every aspect of their operation, while offering a quality show for fans and participants across many levels of competition.