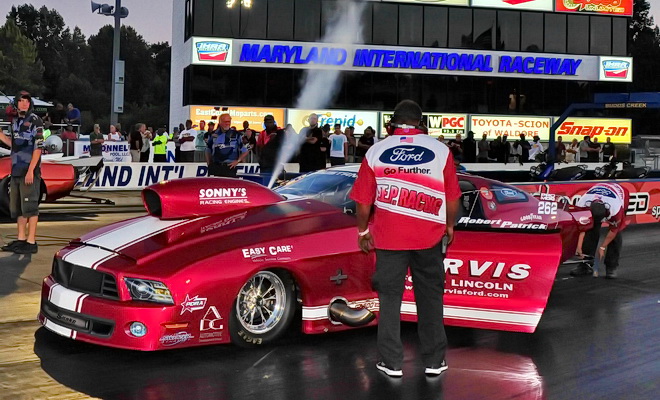 There’s no shortage of entertaining events at Maryland International Raceway (MIR)–even on a Wednesday night! Thrice yearly, MIR presents War on Wheels, a unique Wednesday-night program that always delivers on excitement. Most recently, the 14th annual War on Wheels (WOW! for short) went down on Wednesday, Aug. 13, at the southern Maryland facility. 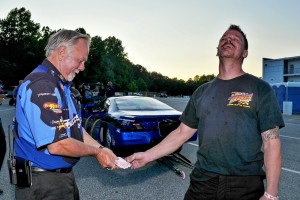 The three components that make up this event are Outlaw Pro Mod, Test-N-Tune and Ladies Night. As for the headlining Pro Mod attraction, it’s about as outlaw as you can get. “We don’t P&G them, we don’t even qualify them,” MIR owner and promoter Royce Miller explains.

Competitors are, however, offered a single shakedown pass, although it doesn’t count for anything other than data collecting and feeling out the track. When they return to the staging lanes for eliminations, Miller walks the lanes with a deck of cards and as drivers pick a card at random, they learn who their opponent will be moments before buckling up.

“It truly is the luck of the draw,” Miller says of the unique eliminations structure. “It’s suspenseful and the drivers and fans seem to enjoy it.”

In fact, it’s not uncommon for the two quickest cars to run each other in the opening round one. And with a little luck, a driver who starts near the bottom can wind up winning the event–just ask Richie Stein, who was victorious earlier this year after “qualifying” near the bump. 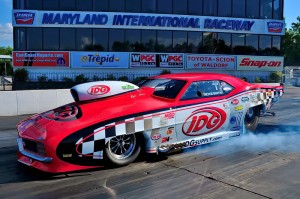 As for the quality of cars, you might be shocked to see just who turns up at MIR on a Wednesday night to compete in WOW! In fact, Rickie Smith debuted his beautiful new ’69 Bickel Camaro at this most recent edition, and he wasn’t there just to make a few test hits; “Tricky Rickie” also entered Miller’s laid-back, card-dealing race!

Smith’s Camaro ran great on its first outing, making it to the semis before losing a close one to eventual winner Chuck Ulsch, who got past Dwayne Wolfe in the final round.

As for the TNT aspect of this Wednesday night event, a $30 TNT fee also allows the driver to enter the $1,000-to-win gamblers race. “This is winner take all; runner-up gets a handshake,” Royce says with a smile.

And finally, gentleman, if you’re looking for a lady to meet who shares an interest in racing, this might just be your best night ever to look for love since ladies are admitted free at this event.

“It’s probably the greatest ladies-to-men ratio of any event we have!” laughs Royce, and he encourages gearhead females to “dress to impress.”

Our verdict? This is a fun and laid back event that packs a lot of excitement in the middle of the week!

Nostalgia Drags at 240 FPS from Matthew Macomber on Vimeo.