When Joey “Hero” Martin (above left) lost to Frankie Taylor in the first round the ADRL World Finals last October in Houston, it very well could have been the end of his illustrious doorslammer-driving career. The multi-time ADRL event winner and consistent championship challenger had grown tired of the day-to-day grind of racing while constantly striving to find enough money to compete at the sport’s highest level. 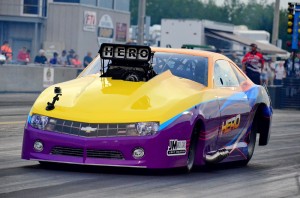 “It’s crazy; here we show up with a million dollars invested to race for a few thousand dollars, while a pro golfer shows up with a few thousand (dollars) in golf clubs to play for a million dollars. And then when we do win a few bucks we have to go begging just to try and get paid,” a clearly frustrated Martin told DRAG ILLUSTRATED at the time. “There’s just no way to justify keeping on like this.”

However, in stepped Pro Extreme team owner Neal Wantye (above right) who ordered a pair of brand-new 2014 Camaros to be built by Joey Martin Race Cars (JMRC) in Milton, Florida, with Martin tabbed as the team’s second driver and crew chief. The two-car Martin-Wantye Racing team was off to a decent start in 2014, with both cars qualifying at each of the three PDRA races held so far (though Wantye crashed in qualifying and was unable to race at Memphis), and Martin reaching the semi-finals at Valdosta, Georgia.

The partnership has abruptly ended, though, Martin confirmed to DRAG ILLUSTRATED in a June 23rd phone call. 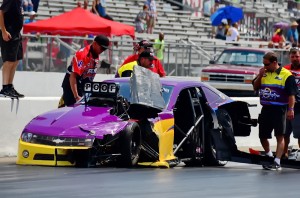 “I don’t really know why,” Martin claimed about learning by text message that Wantye asked for both cars and any parts and tools he owned to be packed up and readied for transport to his Louisville, Kentucky, base.

“He (Wantye) won’t talk to me by phone, but we’ve probably sent hundreds of texts back and forth,” Martin said. “Everything seemed fine after the race at Neal’s home track, Ohio Valley Dragway (June 14). He seemed happy, calling me ‘Hero’ and stuff after Barndon (Snider) beat me with a holeshot in the final there. Then I got home and that’s when the texts started.”

An obviously discouraged Martin said he’ll be at the PDRA race in Martin, Michigan, this weekend helping Snider with his JMRC-built ’63 Corvette and he has a couple of projects to finish in his shop, but after that he’s ready to hang up his racing and building tools for good.

“I know I said it before, but I really think this is it for me,” Martin said. “I’m sick of all this racing stuff; it’s just not worth it anymore.”

Check out the street-legal, LS Chevy-powered, Saturn Ion that the guys over at Dragzine.com found.

For all the drag racing news from across the pond, vist our friends at Eurodragster.com.

In honor of the upcoming annual DRAG ILLUSTRATED nostalgia issue, check out this five-part series on the 1969 U.S. Nationals narrated by none other than legendary NHRA announcer Steve Evans. If you’re a fan of the old days of drag racing, we guarantee you won’t be disappointed!