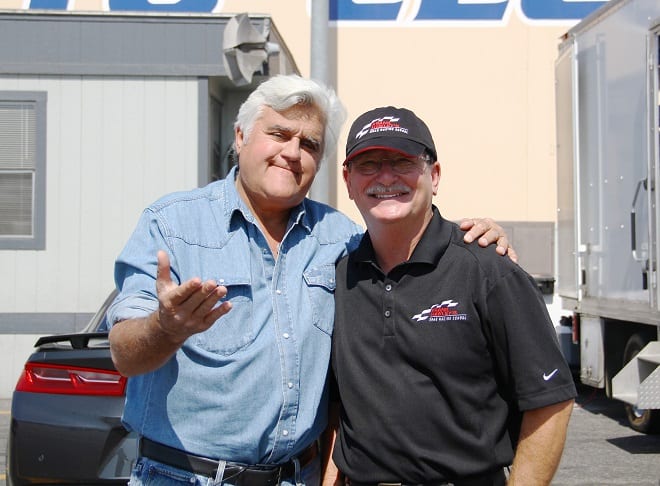 It’s no secret that Jay Leno is a car guy. The former talk show host regularly included car bits during his tenure as host of The Tonight Show, many of them featuring his own massive collection of classics, hot rods, race cars and more. Leno now hosts Jay Leno’s Garage, an online series where Leno not only shows off his personal rides, but also some of the hottest new cars and motorcycles on the market, vehicles belonging to fast and famous friends, and even legit race cars. When Leno and his crew decided they wanted to try drag racing recently, they called up Frank Hawley.

“Everyone in America knows the name ‘Jay Leno’ and most likely everyone knows that Jay is a huge fan of the automobile. His personal collection of cars is one of the largest and most impressive in the country. Jay loves new cars, old cars, fast cars, slow cars and race cars. And he loves to drive them! So when the folks from the television show “Jay Leno’s Garage” called me and said Jay wanted to learn to drive a dragster, I jumped at the chance to work with him,” said Hawley, who runs Frank Hawley’s Drag Racing School. 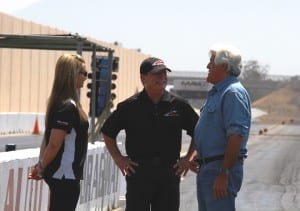 The filming took place at Auto Club Dragway in Fontana, the school’s west coast home. Leno got behind the wheel of one of Hawley’s dragsters before the duo was joined by one of the school’s graduates, Pro Stock world champion Erica Enders. Enders showed up in a not-yet-in-production 2016 Camaro SS, adding another high horsepower, American muscle aspect to the day’s filming.

“We had an absolute blast and it was a joy to work with Jay and his team,” Hawley remarked. “It was possibly one of the most memorable days I’ve had at a drag strip.”

Unfortunately we won’t know any more details about Jay’s performance until the show airs in October. Until then, visit the Jay Leno’s Garage YouTube account to see some of the other cars Leno has featured.