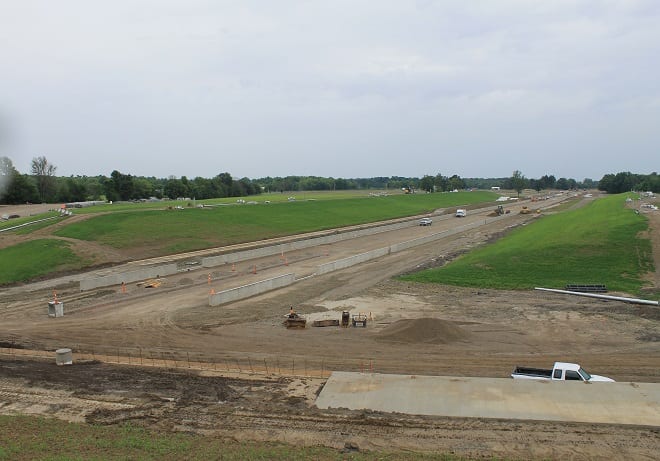 Even though the International Hot Rod Association is based in Norwalk, Ohio, the sanctioning body’s Nitro Jam Series has been absent in the Buckeye State since 2006. That’s scheduled to change this September, though, when the completely renovated Dragway 42 hosts their first major event, the revived IHRA Nitro Jam World Nationals.

While I was in the area for the Summit Racing Equipment NHRA Nationals just down the road in Norwalk, I stopped by Dragway 42 to see the progress as the project nears the August completion date. General manager Joe Gambino and new owner Ron Matcham and his son, Kyle, were kind enough to spend the better part of two hours showing me around the property and explaining everything they’re doing to make Dragway 42 one of the premier dragstrips in the Midwest.

The transformation started in 2013 when Matcham purchased the rundown facility with modest plans to fix it up – repave the track, touch up the paint and maybe add some pavement to the pits. That projected one million dollar refresh has turned into a daunting $10M complete overhaul. The property was leveled before construction crews built up 50-foot-tall hills along the entire quarter-mile on each side of the track, giving the track an amphitheater-style seating layout. An estimated one million yards of dirt was moved to make all of the changes, including a 180-degree change in the direction of the track to allow for a longer shutdown area.

The view looking down-track from the left lane hill.

The Matcham and Gambino families both race, so the track was really built for racers, by racers. As Gambino explained some of the simple yet thoughtful features of the facility, it became obvious Dragway 42 is truly being rebuilt with the safety, comfort and convenience of the racer in mind, more-so than most of the tracks I’ve visited. Drains have been placed every 20 feet along both sides of the track from the burnout box to the turnoff, which will help draw rain water from the track surface through 4,000 feet of drainage tile and into one of the four retention ponds on the property. Competitors will have 3,000 feet to slow down and make the turn-off. If that isn’t enough, there’s a 200-foot long pea gravel pit. There is also a turn-off at the quarter-mile for use during eighth-mile events. As far as pit parking goes, contractors estimate the east pits can accommodate 680 rigs, while the west side can hold another 410.

Fan accommodations were also heavily considered when rebuilding Dragway 42. The grandstands, purchased and trucked in from Daytona International Speedway, will seat around 3,000 people. The massive, grassy hills will allow another 19,000 fans to set up folding chairs and blankets, an idea Matcham borrowed after a visit to Cleveland’s Blossom Music Center. Spectator parking won’t be an issue, as the property includes another 100 acres just for fan parking.

Northern Ohio’s wet spring and early summer weather has slowed down the pace of construction, yet Matcham, Gambino and their contractors have powered through with tenacity in an effort to follow through with their plans to open this year. The construction crew still has plenty left to work on before we’ll see a finished product, but it was 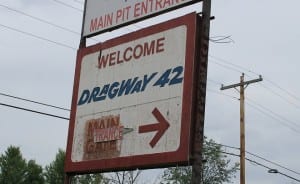 easy to envision the tire smoke rolling out of the valley, the flip-top nostalgia Nitro Funny Cars of the IHRA Nitro Jam series pulling through the staging lanes, and the rows upon rows of haulers parked in the pits. It’s an impressive project, and Ron Matcham and his staff should be commended for doing so much to help keep Ohio’s drag racing scene healthy while reviving one of the state’s most historic strips. I’ll be sure to return and report back when the track is finished.