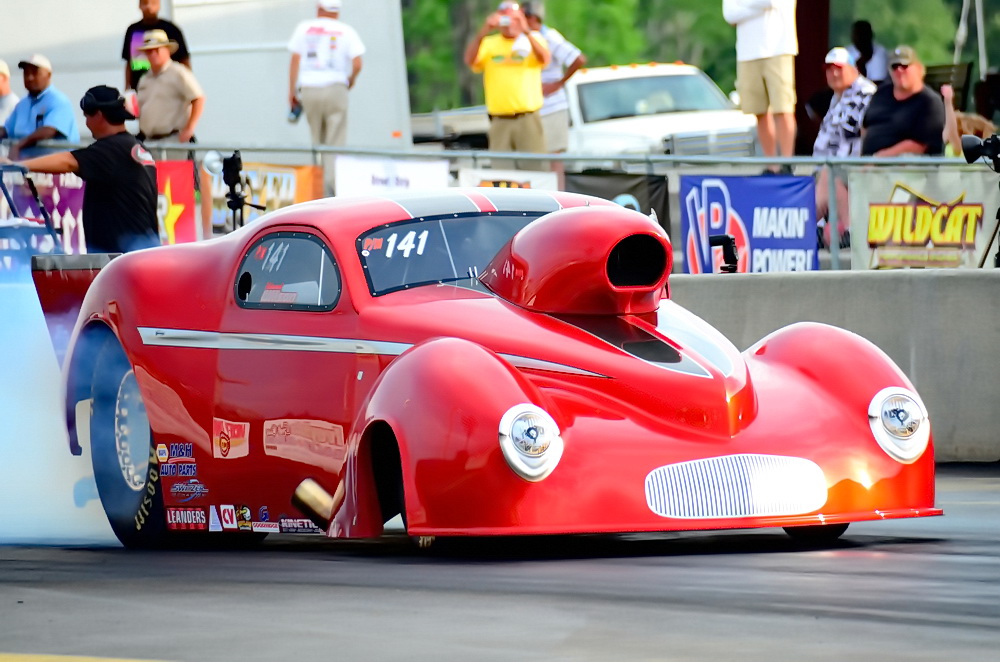 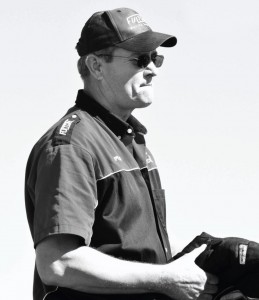 June 2012 at Gateway Motorsports Park, Ed Wilson wheeled his ‘41 Willys to his best ever professional finish by earning a runner up in ADRL Pro Modified. He would leave St. Louis third in points. Sadly, he never had the opportunity to continue that Championship chase. A week later Wilson competed in a Big Dog event at Piedmont Dragway, not far from his Benson, NC home. He qualified number one and was racing Jason Harris in round one when the Willys careened out of control, striking the right guardrail hard. He ricocheted and bounced off the left guardrail before coming to rest.

Wilson suffered a broken tailbone and three fractured vertebrae. He would be out of work a full year to recover. It would take the rest of 2013 to get his Willys back in working order. At the Inaugural PDRA Spring Open in April of this year Ed Wilson made his triumphant return.

“I’m back among friends,” stated Wilson. “It feels pretty good [to be back]. Anybody that runs cars at this level, they have to really have a passion because there’s way more work than there is fun. It’s definitely a challenge, but I enjoy racing with these guys. It’s a real nice atmosphere. It’s an enjoyable weekend even if you don’t do well.”

They say it takes a village to raise a child. It took a community of drag racers to resurrect the Willys.

“I had some friends that have helped out a lot,” Wilson continued. “Different ones contributed parts and helped me in different ways. I can’t name them all. One of my fellow racers bought the front end for me, another gave me a fuel pump, another gave me a battery. Just stuff like that. I have friends when I go to the races that are closer to me than people that stay next door. There’s a special camaraderie between the racers, because whoever’s there at the races, they have to have a passion to do that and we share that same passion.

“Those people stood by me, offering to help and many did help. It really means a lot to me. Makes you want to go back and be with those people again.”

Wilson also credited the Drag Racing Association of Women (DRAW) for being a major help in his time of need.

A do-it-yourselfer from way back, Wilson did much of the paint and bodywork on the reconstructed Willys himself. The effort and time he invested certainly paid off. The car won Best Appearing at the recent PDRA Memphis Drags. Wilson said he originally chose a Willys body in a sport where aerodynamics can be key because he “just liked to have something different.”

“We’ve received a lot of nice comments about it,” he said of the finished Willys. “That’s rewarding in itself. It was really nice [to receive Best Appearing], especially when you do the work yourself.”

Wilson is a man who is used to doing work himself, he and his wife being the sole force behind his bodywork and wrecker businesses. Even at the track, Wilson does much of the work himself. “I really miss my son. He was my Crew Chief before the wreck. Now he’s moved away and my good friend Bruce comes with me, but we’re still missing that third man. Different ones help us out at different times.

“Right now I’m honestly trying to get the car sorted back out. Done a lot of changing. Just really hadn’t quite gotten the combination figured out. I think it will be competitive once we do.”

Although it’s been a long journey to get back behind the wheel, Wilson never once doubted he would make it. “Always from the time I was a small child, I’ve been fascinated with cars. I raced with my imagination when I was a little boy. I reckon I still got that in me.”

Wilson’s first race car was a Hot Rod ‘55 Chevrolet that he raced locally as a teenager before growing into the Quick 8 racing that became popular in the ‘80s. Then for nearly 15 years, racing took a back seat until Wilson purchased the Tommy Mauney built Willys chassis in 2006. He debuted the car in Ennis, Tx. in late 2009 and had the opportunity to race in Qatar in 2010 with the Arabian Drag Racing League. “That was a real treat,” Wilson said of racing abroad. “I enjoyed it. I never thought of doing anything like that, but I was thankful for the opportunity. It was hard not having help. I’m not able to afford to pay a crew so I was at everybody’s mercy. But I enjoyed it.”

Although Wilson is a budget racer, he appreciates the help he receives from JEG Contracting, Leanders Clutches, M&H Auto Parts and Goodridge Hoses. He says he also appreciates “my wife, for putting up with me.”

It is certainly good to see Ed Wilson back among friends with the PDRA. And you can bet it won’t be long before his friends find him back in the winner’s circle again.

Steve Matusek opens up about his first career NHRA Pro Mod final round at DragIllustrated.com.

Final round action from this past weekend’s NHRA New England Nationals.

Some Pro Mod testing from the UK during the mid ’90s.