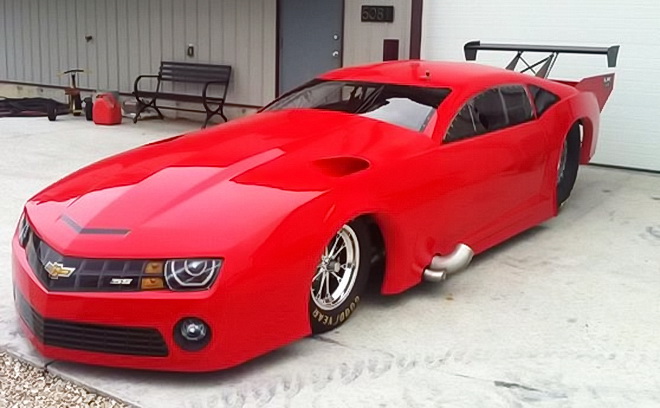 Precision Turbo and Engine (PTE) has unveiled its newest race-ready, twin turbo Pro Mod car. The 2014 Chevrolet Camaro will be driven by expert wheelman Don Walsh, Jr. and will make its debut at an upcoming NHRA race.

“I couldn’t be happier with how this car turned out. It looks incredible and should run flawlessly. Larry Jeffers and the guys did an excellent job putting it together,” stated Hruska. “Our revolutionary GEN2 Pro Mod CEA turbos feature the most innovative and advanced turbo technology currently on the market, and we’re confident that this car will be a front runner.”

Hruska has owned a string of highly-successful Pro Mod cars over the years, including the iconic ’68 Camaro first piloted by Brad Personett and currently driven by Walsh, the ’11 Ford Mustang previously driven by Walsh, as well as the Plymouth Duster in which Todd “King Tut” Tutterow set the eighth-mile speed record in 2011.

Dedicated to continuous innovation and advancement of turbo technology, Hruska has put together what will be a fiercely competitive Pro Mod car and test-platform.

“In collaboration with Larry Jeffers Race Cars, we have put together a uniquely-designed chassis for turbocharged applications to help develop the program,” Hruska added.